The German chancellor has been recognized for her leadership style by the HHL Leipzig Graduate School of Management. Merkel has received several similar titles, including from Harvard University. 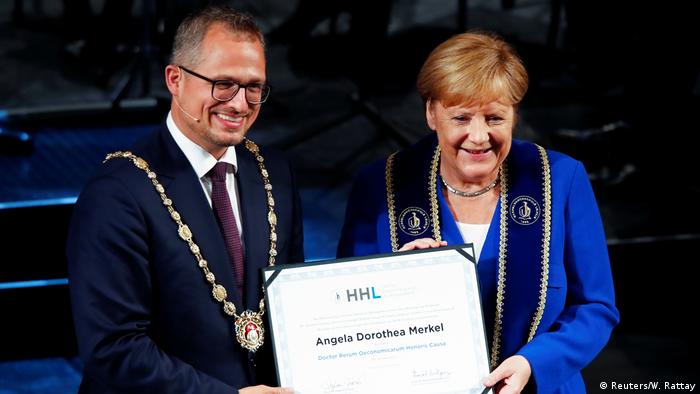 Chancellor Angela Merkel on Saturday received an honorary doctorate as part of a German university's graduation ceremony for 220 international students.

The award, which the chancellor received in person at the Leipzig Opera, is her 17th honorary doctorate after similar gestures from universities in the US, Israel, Germany, the Netherlands and several eastern European countries.

Earlier this year, Merkel was awarded an honorary doctorate by the elite Harvard University in the United States.

"In any case, all the universities that have given me an honorary degree will be hearing more from me when I'm no longer chancellor," Merkel, who intends to step down before the next German election, currently set for 2021, promised the audience. "I will return and will not be staying a short time like today, but will be staying longer."

Lagarde said the chancellor was "an exceptional personality" who had improved the world "in no small measure" through her "outstanding leadership."

The former head of the International Monetary Fund also praised Merkel's "untiring efforts to bring people together," adding that cooperation instead of confrontation is always the starting point for her leadership, especially on the world stage.

Merkel is always the "best-prepared person in the room," Lagarde added, describing how the German chancellor methodically and patiently dissects a problem into its individual parts before developing a step-by-step solution.

Read more: Why the state elections in eastern Germany are important

She also praised Merkel's "incredible inner strength" that enabled her to persist in negotiations until a deal was reached.

Merkel has a genuine doctorate of her own. She earned her Ph.D. in quantum chemistry in 1986 in the former East Germany, at the Academy of Sciences in East Berlin.

Merkel couldn't contain a surprised smile at Trump's announcement, but social media users weren't so gracious. The mayor of Trump's grandparents' hometown shrugged at the news. (26.08.2019)

Schools are set to move into the digital era, after Germany's upper house voted to change the constitution. Critics say federal support for schools will erode states' rights, but a majority of Germans support the move. (15.03.2019)