Merkel affirms her rejection of eurobonds in budget debate | Germany | News and in-depth reporting from Berlin and beyond | DW | 24.11.2011

Merkel affirms her rejection of eurobonds in budget debate

Chancellor Angela Merkel is standing strong against calls from Brussels to introduce eurozone-wide bonds, calling the idea "extremely worrying and inappropriate" in a debate over her government's 2012 budget. 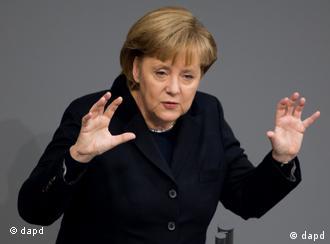 German Chancellor Angela Merkel defended her government's 2012 budget in parliament on Wednesday, rejecting the European Commission's call for eurobonds and calling for greater fiscal cooperation across the eurozone.

It was not an easy balancing act for Merkel. After an emotional five-minute speech commemorating the 10 victims of the recently discovered neo-Nazi cell, the German chancellor had to transition to the day's main agenda - above all, the euro crisis.

The parliamentary budget debate is traditionally a formal chance for the opposition to criticize the government's policies in general. But this time interest focused much more on what the chancellor had to say than on the opposition's rebuttal.

A resounding 'no' to eurobonds 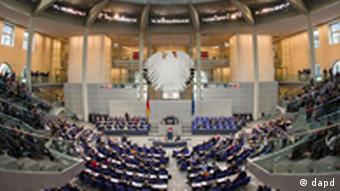 Merkel continued to take her unyielding position towards calls from neighboring countries and the opposition at home to look more positively on the issue of eurobonds.

"I consider it extremely worrying and inappropriate that the European Commission is directing the focus to eurobonds today," she said, referring to calls on Wednesday by the Commission's president, Jose Manuel Barroso, to offer bonds which would be underwritten by all 17 members of the currency union.

It was false to assume that the "collectivization of debt would allow us to overcome the currency union's structural flaws," she said. Rather, the EU's Stability and Growth Pact, which she said has been broken 60 times, must be strengthened to punish members who live beyond their means.

Eurobonds would likely benefit countries like Greece, whose borrowing costs on the open market have become prohibitively expensive, but they would expose fiscally sound countries like Germany to more risk, thereby increasing the country's prized low interest rates.

In an ironic twist on Wednesday, an auction of German 10-year bonds, widely considered the safest investment in Europe, went surprisingly bad. Germany sold only 3.6 billion euros ($4.8 billion) worth of bonds out of the 6 billion euros offered - a result that reflects extreme anxiety on the part of investors. 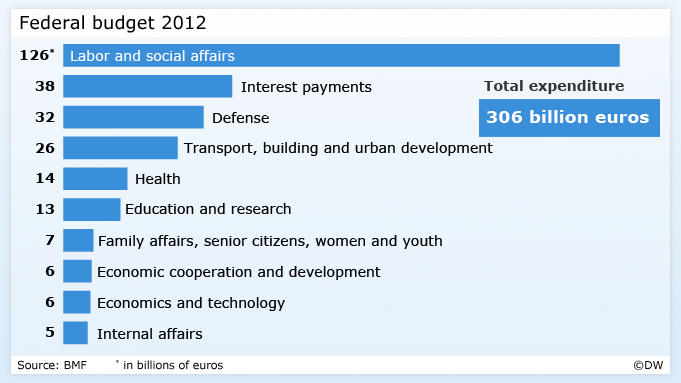 The fact that the debate did not, as it has in the past, turn into the hour of the opposition was in part due to the speech given by Sigmar Gabriel, head of the center-left Social Democrats. Gabriel pointedly avoided the issue of the eurobonds, which he supports but his party's financial policy experts - and the majority of German voters - reject.

The opposition, including the Greens and the Left party, primarily accused Merkel's government of hypocrisy, talking big on the need for fiscal discipline among Germany's neighbors while setting a poor example itself.

Finance Minister Wolfgang Schäuble plans next year to take on 4 billion euros more debt than in the current year, despite a budget surplus and historically low interest rates on government bonds. The opposition accused Schäuble of abusing Germany's credit to finance a planned tax cut - which Gabriel said would bring a pitiful four extra euros per month to middle-class earners.

"We ought to save up today, so that we have jobs in this country tomorrow," he said. Addressing the chancellor, he continued, "You are calling for strict austerity in Europe. How credible do you really think this policy is when you're increasing the debt in Germany, where conditions are much better than in any other European country?"

'Fiscal union' instead of 'debt union' 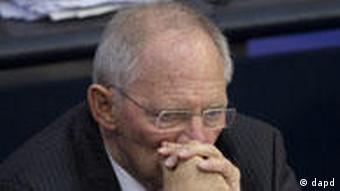 Gabriel also connected the government's planned tax cut with the issue of right-wing extremism. Local communities will be hit the hardest by the tax cut, he argued, giving far-right parties like the National Democratic Party (NPD) the chance to fill the void by funding youth clubs and services that would otherwise have to shut down.

The head of the Left party, Klaus Ernst, criticized Merkel's strict demands for budget cuts in Greece, saying the austerity has been counterproductive by stifling growth and creating a record debt level. Green parliamentary chief Renate Künast said she saw no way around the eventual introduction of eurobonds.

As an alternative to the unification of eurozone debt, Merkel proposed broad structural reforms, such as the creation of a "fiscal union" in which workers' rights, retirement ages and tax policies would be harmonized across the bloc.

She also backed the creation of a common corporate tax between Germany and France in 2013, a position she plans to defend at the summit of EU member states on December 8 and 9.

The European Commission has unveiled ideas how the introduction of so-called eurobonds would work. All of them would require member states to submit budget plans to the Commission for closer scrutiny. (23.11.2011)

Greece's interim premier has held a disappointing first meeting with the president of the EU Commission in Brussels. Lukas Papademos failed to secure commitments from Greece's party leaders to long-term economic reforms. (21.11.2011)