The European Commission has unveiled its ideas as to how the introduction of so-called eurobonds would work. All of them would require member states to submit budget plans to the Commission for closer scrutiny. 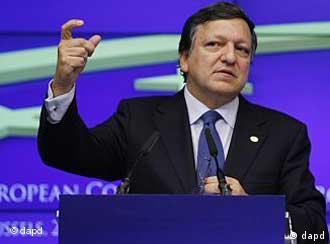 Barroso sees eurobonds as a way out of the debt crisis

The European Commission on Wednesday introduced its plans for the introduction of so-called eurobonds, in an effort to alleviate the growing eurozone debt crisis.

Three options are on the table now for the introduction of the eurobonds, or bonds issued jointly by the members of the eurozone.

Outlining these options on Wednesday, European Commission Vice President Olli Rehn said none were "a silver bullet to get us out of the crisis." But both Rehn and Commission President Jose Manuel Barroso stressed they expected eurobonds - which they now prefer to call "stability bonds" - to alleviate the current European debt crisis.

The Commission's aim is use the jointly issued bonds to lower funding costs for those members currently under pressure. And pressure is continuing: Spain's short-term borrowing costs hit a 14-year high on Tuesday, and on Wednesday, borrowing costs for French and Belgian bonds also climbed.

Fear that the debt crisis was finally spreading to the zone's strongest economy was sparked when a German government bond sale on Wednesday met with unexpectedly poor demand - a development which was described by one analyst as a "complete and utter disaster."

Barroso answered concerns about the risk that cheaper borrowing could lead some countries to show weakness in tackling their debt problems by insisting that, under all the options, the fiscal policies of eurozone members would have to be scrutinized much more closely by the Commission.

He proposed that eurozone members would have to submit draft budget plans to the Commission by a certain date. If the Commission deemed the plans to be out of sync with EU budgetary requirements under the Stability and Growth pact, it could request changes in the draft.

Barroso conceded that two of the three options on the table would very likely require a change of the current EU treaty. That would require parliamentary approval and, in some countries, even a referendum. While that could take some time, the Commission expects agreement to introduce the eurobonds in principle would have an immediate impact on market expectations.

Prior to Barroso's speech in Brussels, German Chancellor Angela Merkel reiterated her opposition to eurobonds in a speech before the lower house of German parliament, the Bundestag. Merkel said she found it "worrying and inappropriate" that the European Commission was again focusing on eurobonds.

Germany fears its own very low borrowing costs would rise sharply if its debt were pooled with other, less fiscally solid countries such as Italy, Spain and Greece.

Merkel's well-known position led a German journalist to ask Barroso at his press conference in Brussels whether he wanted to provoke the German chancellor by inciting a discussion on eurobonds - an idea Barroso refuted. "It is not appropriate for a member state in the EU to say from the beginning that a debate should not be held," said Barroso, adding that it was the Commission's duty to provide analysis.

Eurozone countries now have until January to comment on the Commission's proposals - only then will the Commission suggest how to proceed. Merkel is expected to discuss the Commission's suggestions when she meets with French President Nicolas Sarkozy and Italian Prime Minister Mario Monti in Strasbourg on Thursday.

Merkel affirms her rejection of eurobonds in budget debate

Chancellor Angela Merkel is standing strong against calls from Brussels to introduce eurozone-wide bonds, calling the idea "extremely worrying and inappropriate" in a debate over her government's 2012 budget. (24.11.2011)

The eurobond debate in the eurozone shows no sign of disappearing, even if Angela Merkel and Nicolas Sarkozy remain opposed to the idea. Yet most experts agree - eurobonds will come sooner than later. (23.11.2011)