Merkel Abroad Focuses on EU, Reaches Out to US

Angela Merkel marked her first day in office visiting European leaders. She had lunch in Paris to talk about the EU and an afternoon snack in Brussels, where she called for closer ties to the US. 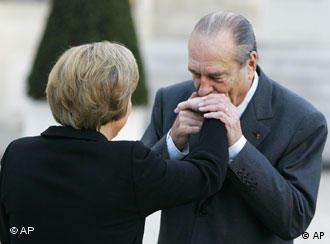 A French kiss on the hand for Germany's new chancellor

New German Chancellor Angela Merkel called on Wednesday for closer ties with the United States during a visit to NATO headquarters in Brussels as part of her first trip abroad as leader.

"I believe the ties between the US and Germany can be developed further," she said after talks with NATO Secretary General Jaap de Hoop Scheffer.

Relations between Germany and the United States were badly soured by the staunch opposition of Merkel's predecessor, Gerhard Schröder, to the US-led war in Iraq.

Germany's stance on Iraq is a policy that Merkel said would not change with her at the government's reins, and that Germany would not be involved in NATO's training of Iraqi military officers inside Iraq. 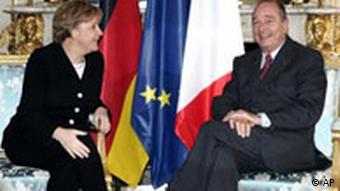 Merkel was off to Brussels after meeting with Chirac

Merkel added that the military alliance should be a key forum for improving transatlantic ties.

"NATO should be, I believe, the place where people turn first, where member states turn first, to discuss political issues of common concern," she told reporters. "First and foremost we should try to pursue the approach that NATO is the place for such discussions. I believe that

is very necessary ... only that way can we see to it that NATO continues to be a political alliance."

Earlier in the day Merkel had traveled to Paris, where she agreed with French President Jacques Chirac on the importance of keeping Franco-German relations strong.

Chirac greeted Merkel at the Elysee Palace with a discreet kiss on the hand before they posed for photographs, smiling broadly and exchanging a few words. 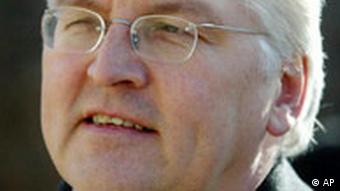 Merkel, accompanied by new German Foreign Minister Frank-Walter Steinmeier, had lunch with Chirac. In a follow-up press conference, Chirac said a "truly strong" Franco-German partnership was essential for Europe. The two countries are united in their wish for "a political and social Europe" and "a truly strong Franco-German axis" is necessary for the 25-member European Union, Chirac said.

Formally named chancellor Tuesday, Merkel's choice of Paris as her first foreign destination is seen as a fresh affirmation of the strength of the Franco-German relationship at the heart of the European Union. Thursday she will fly to London where Prime Minister Tony Blair will try to reach a compromise with Merkel on the EU budget, which she has already refused to increase.

The conservative head of a rare left-right German coalition, Merkel was formally named chancellor by the German parliament on Tuesday. As the country's youngest and first female leader, her election ushers in a new era of delicate decisions when it comes to diplomatic protocol.

Take Chirac's gallant hand-kiss -- a greeting he never gave Merkel's predecessor, Gerhard Schröder. And then there's the question of whether Merkel would wear a head scarf if she were to visit certain Middle Eastern countries; the rules of diplomacy dictate that the visiting party conform to the customs of the host. 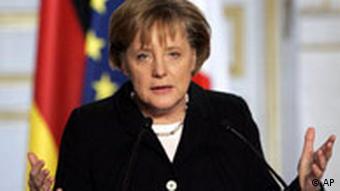 The main objective, of course, is to avoid embarrassment. A recent visit by an Iranian statesman in Brussels could serve as a warning to Merkel's protocol officers: Iranian Parliament President Gholam Ali Haddad-Adel refused to shake the hand of Belgium's Senate President Anne-Marie Lizin, because she is a woman.

Should Merkel receive a state visit from Iran, her team would do well to iron out such potentially embarrassing details beforehand.

At least one point of protocol has been clarified: The correct title for Germany's female head of government is Madame Chancellor.

An ongoing EU push for gender equality aims to help women improve their lot in European society. But while quotas have helped the fairer sex make strides in politics, the boardroom remains a boys' room. (Nov. 8, 2005)

Merkel Aims for Warmed-Up US Ties, Partnership With France

Under Chancellor Angela Merkel, Germany will seek to repair ties with the United States while maintaining the German-French axis at the heart of the European Union. (Nov. 23, 2005)

Opinion: A Clear Signal for Germany

Angela Merkel is Germany's new chancellor and the first woman to get the job. She faces a tough time ahead, but as DW's Nina Werkhäuser comments, Merkel represents a double departure for Germany. (Nov. 23, 2005)