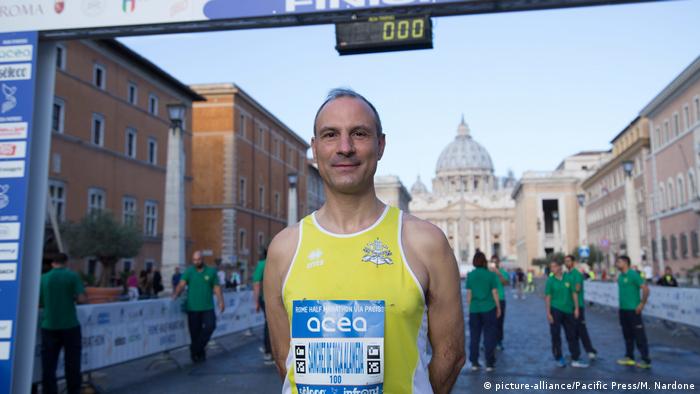 Vatican City State is set to establish national associations for taekwondo and judo. This follows the establishment of its athletics federation, "Athletica Vaticana" one year ago. One of Vatican's long-term goals is to send athletes to the Olympics, Monsignor Melchor Sanchez de Toca, the Vatican's sports commissioner told DW in this exclusive interview. Vatican City is home to around 500 citizens, including the Pope (who is also the head of state), cardinals, priests, nuns and civil servants.

Monsignor de Toca, you are not only a runner yourself, but you are also the Vatican's sports commissioner. What role does sport play in your personal life and the life of rest of Vatican City's residents?

I am a very amateur runner, with a modest past in modern pentathlon. Sport is important in everyone's life: The positive impact of sport is well described in the Vatican Document "Giving the Best of Yourself," published in June 2018. It is a school of virtues and values, that fit perfectly with a Christian vision about the human person. As Irenaeus, the second-century Christian writer and thinker said: "the glory of God is the living person." Like many of my colleagues and other people throughout the world, I try to translate this into my daily life; my running routines and exercises, combined with some swimming, hiking and climbing, are part of my life as much as personal meditation, saying mass or attending confession.

How professionally do Vatican athletes train?

Some of our athletes are really strong, especially the women. Others run just for fun. Everyone tries to fit the training sessions into their family or pastoral schedules. We have coaches who offer personalized training programs tailored according to age, capacity and goals.

Athletica Vaticana, with you as its president, was established in January 2019 and now two more associations are to follow.  Why does the Vatican need sports associations in the first place?

Athletica Vaticana is a track and field association. We would like however to promote the creation of other sport groups. The ultimate goal is to create an Olympic Committee, and for this to happen, there must exist at least five internationally recognized federations. We would simply like to promote sport, all disciplines, among Vatican residents and employees.

It seems surprising that Vatican City would choose to establish associations of two martial arts, taekwondo and judo. What is behind this decision?

Taekwondo is a sport that involves discipline, self-control and great flexibility. Taekwondo and judo used to be part of the training program of the Vatican Gendarmeria (police). It is not intended for fighting, or as a self-defense technique, but simply as a sport. 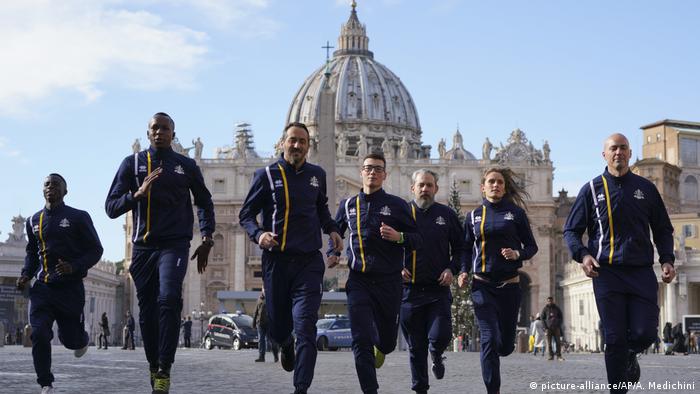 Vatican runners work in their training sessions when they can

Do your athletes, as representatives of Vatican, have a special obligation to values such as fair play and competing without the use of performance-enhancing substances?

Every athlete should respect the principles of fair play and honesty, as stated in the oath sworn at the Olympic Games. And yes, for Vatican athletes, because of what they represent, there is a strong awareness of moral duty and ethical obligations. 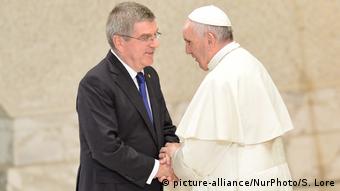 How realistic is it to expect Vatican athletes to be competing in major international sporting events such as the Olympic Games or world championships in the foreseeable future?

Our goal is not to win medals or stand on the podium but simply to take part at some international competitions, especially those with cultural or spiritual added value, i.e. the Olympic Games, the Mediterranean Games, or the Games of the Small States of Europe, seriously and honestly, competing and giving our best, but without any expectation of winning.

Pope Francis is known to be a football fan and a supporter of Argentinean Club Atletico San Lorenzo de Almagro. Has the presence of a sporting enthusiast in the city state's highest office led to a boom in sports in the Vatican?

Pope Francis' exhortation to "go out" has no doubt encouraged the presence in areas that might have seemed far from the Church in other times, but our work actually began under Pope Benedict. And we cannot forget Pope John Paul II who was an athlete himself. We feel a great sense of continuity in the support Popes have granted to sport in the last century. The emphasis Francis has placed not just on "going out" but "going out to the peripheries" similarly encourages us — and by us I mean the whole Catholic Church and not just the Vatican, which mostly does so symbolically — to be present not just in the major sports, but also in all those sports where people are looking for some sort of meaning... Fundamentally, we simply seek to share the light of the Gospel in the service of the dignity of each and every human person, particularly the poorest and neediest, including the migrants and those mistreated and abused, who can find in sport a path toward an "unknown goal." That's the journey we wish to share.

Spanish clergyman Monsignor Melchor Sanchez de Toca is state secretary in the Pontifical Council for Culture. As the Vatican's sports commissioner, the 53-year-old is in frequent contact with the International Olympic Committee (IOC) and other sports organizations. Sanchez de Toca is also president of Athletica Vaticana, the Vatican's athletics association, which was founded in January 2019.