Experts say that instead of expressing anger and grief over the killing of the Pakistani Taliban's leader Mehsud in a US drone strike, Islamabad should use it as an opportunity to tame the Islamist militants. 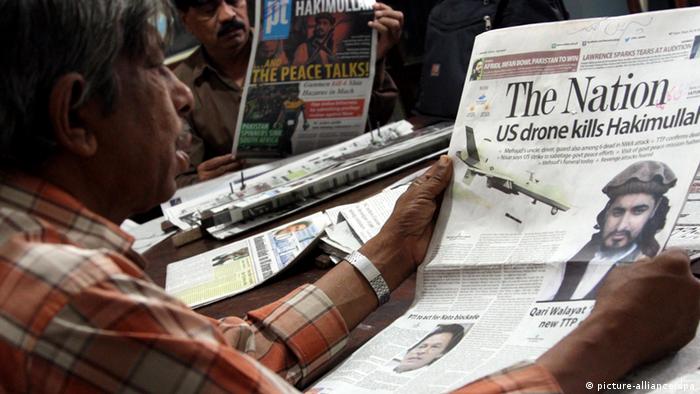 Hakimullah Mehsud - the head of the Tehrik-i-Taliban Pakistan (TTP) - was killed in a US drone strike on Friday, November 1, along with four other people, including two of his bodyguards, in the semi-governed North Waziristan area bordering Afghanistan.

Mehsud, one of the most feared Taliban militants, became the head of the TTP in 2009 at the age of 30 after his predecessor Baitullah Mehsud died in US drone strike. The US had put a bounty of $5 million (3.6 million euros) on Hakimullah Mehsud's head for the killing of the seven CIA employees.

A TTP spokesman said Sunday that Asmatullah Shaheen Bhittani, the head of the organization's supreme shura (council), had been appointed as their interim head. He said no decision had been taken on the permanent replacement of Mehsud. 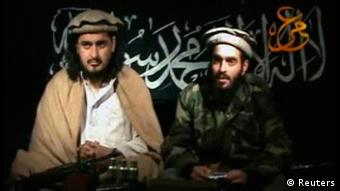 The Pakistani government has reacted angrily to the strike. Prime Minister Nawaz Sharif's government reacted by summoning the US ambassador in Islamabad to protest the attack. Chaudhry Nisar Ali Khan, the country's interior minister, said the strike on the Pakistani Taliban's most important leader was "not just the killing of one person, it's the death of all peace efforts."

Many in the Islamic Republic - where anti-US sentiment runs high - share their government's views on Mehsud. They also fear that the Taliban - which have claimed responsibility for the murder of thousands of Pakistanis in the last six years - will retaliate by unleashing more violence in the country, and that if there was any hope of "peace" with Islamists, it ended with Mehsud.

"There was finally a glimmer of hope for peace in Pakistan. It has vanished. The Taliban are going to avenge the death of Mehsud and it is very bad for the country," said Shaukat Rehman, a shop owner in the southern city of Karachi.

And he is right. The militants have vowed revenge:

"Every drop of Hakimullah's blood will turn into a suicide bomber," said a Taliban spokesman. "America and their friends shouldn't be happy because we will take revenge for our martyr's blood."

The Pakistani government claimed that a government peace delegation had been due to meet Mehsud in the Taliban stronghold North Waziristan before Friday's strike. This is why it claims the US drone strike was an "attack" on the peace talks. The government has shown its displeasure over Mehsud's death to an extent that the foreign minister said Islamabad was reviewing "every aspect" of cooperation with Washington. The US maintains it has an understanding with Islamabad on counter-terrorism policies for the region. 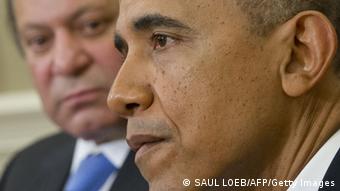 Drone strikes have become a thorny issue for Pakistani leaders, who face mounting criticism from the public for their inability to convince the US to halt them. While acknowledging that more militants have been killed in such strikes than civilians, Islamabad has nonetheless repeatedly called for an end to these strikes, saying they are a violation of its sovereignty and territorial integrity.

After winning the May 11 elections, Prime Minister Nawaz Sharif had made it clear that his party would rather engage in "peace talks" with Islamist militants than launch military operations against them. The center-right Tehreek-e-Insaf - Imran Khan's Movement for Justice Party - which governs the volatile province of Khyber Pakhtunkhwa, also opposes military action against the Islamists. Reacting to Mehsud's killing, Khan threatened to block NATO's crucial supply route to Afghanistan.

London-based Pakistani journalist and researcher Farooq Sulehria told DW he was surprised at Islamabad's reaction to Mehsud's assassination and that the Pakistani Taliban had denied PM Sharif's claims that his government had contacted them and arranged to meet. He called government's peace talk claims a "sham" and added that its stance on the Taliban is "full of contradictions."

"The government's objective is not to achieve peace. It is afraid of the Taliban's retaliatory attacks," Sulehria told DW. "Their real aim is to bring the angry Taliban factions back under the Pakistani military's command so a unified offensive can be launched to re-capture Kabul once the NATO troops leave Afghanistan in 2014."

Saleem Asmi, a Karachi-based senior Pakistani journalist, agrees: "The supposed parameters of peace talks were never defined, and there had never been even a hint from the Taliban that they were even interested in the process.

"How can an unborn process be described as having been 'murdered' by the drone strike?" he questioned.

Aamir Rana, executive director of the Islamabad-based think tank Institute of Peace Studies, is one of many experts who think that the Sharif government's dialogue strategy with the Taliban is the right path to restoring peace in the country. 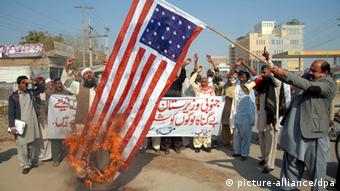 "The dialogue strategy with the Taliban is workable," Rana told DW, adding that it was also "a good sign that Sharif wants to have an upper hand in formulating the counter-terrorism strategy, and is not relying totally on the military."

Liberal Pakistanis have welcomed the death of Mehsud and say it will weaken the TTP. But experts warn against too much optimism. The say that while Mehsud's killing is a serious blow to the Pakistani Taliban, drone strikes alone cannot eliminate the militants.

Arshad Mahmood, a peace activist in Islamabad, believes that Mehsud's death gives Pakistan's rulers the upper hand in negotiating with the Taliban. "The government should use it as an opportunity. It should force the Islamists to accept Pakistan's law and constitution," he told DW. "But to do that, the Pakistani state has to change its policies and transform the country."

Analysts say that Islamabad's reaction to Mehsud's death suggest it is far from a transformation of this kind.

Can/should the November 1 targeted killing be seen as justification for the US drone program? Tell us what you think!

The Pakistani government has sought the help of the central body of religious clerics in an attempt to reach out to the Taliban for peace talks. But many Pakistanis think it is a bad idea. (03.10.2013)

Pakistani Prime Minister Sharif has assured the world after visiting the country's nuclear control authority that the Islamic republic's atomic weapons are protected. Some security experts, however, are not convinced. (07.10.2013)