Britain's Prince William and Duchess Kate have revealed the name of their newborn son: Louis Arthur Charles. Here are a few other British royal babies who've also had to smile for the camera.

The baby was born on Monday. He is Duchess Kate's and Prince William's third child, following Prince George, aged four, and Princess Charlotte, who turns three in May.

The boy is Queen Elizabeth II's sixth great-grandchild and fifth in line to the throne, after grandfather Prince Charles, father Prince William and the two older siblings. 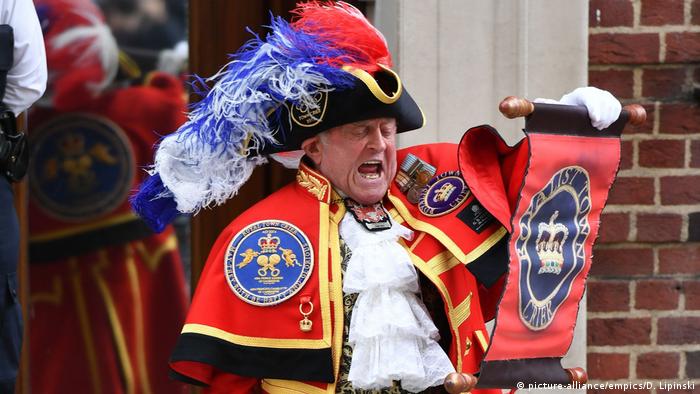 A town crier announces the birth of the royal baby

"Her Royal Highness and her child are both doing well," a royal statement said after the birth.

"The Queen, the Duke of Edinburgh, the Prince of Wales, the Duchess of Cornwall, Prince Harry and members of both families have been informed and are delighted with the news," it read.

The new arrival places Prince Harry, who will marry US actress Meghan Markle in May, to sixth place in the line of succession.

Glittering gowns, elegant suits and bold mini dresses worn by the late Princess Diana are on show at Kensington Palace, marking the 20th anniversary of her death. The exhibition charts her evolving style. (30.08.2017)

As Queen Elizabeth II turns 90 on April 21, she's drawing attention around the world. But when she makes public appearances, how can we know it's really her? Her identity has been borrowed countless times. (20.04.2016)