McCain Feels the Love From European Conservatives | Europe | News and current affairs from around the continent | DW | 04.09.2008

It's not just Barack Obama who has throngs of European supporters. A group of conservatives from across the Continent traveled to Minnesota to support their candidate for the US presidency: John McCain. 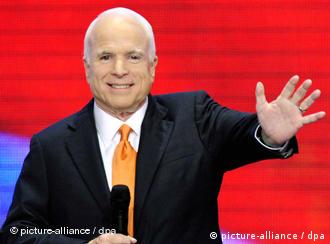 Europeans know McCain as someone "interested in trans-Atlantic relations"

Republicans celebrating their national convention have saved few words in hammering the Democratic presidential nominee Barack Obama for his "celebrity" tour of Europe this summer.

Yet Europe's conservatives were in attendance at the Republican National Convention in Minnesota, to proclaim their admiration for Republican Party candidate John McCain.

Republican speakers at this week's presidential nominating pageant have delighted in ridiculing Europe as a pro-Obama home of stifling welfare states.

Support from the European People's Party 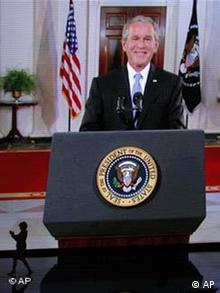 Obama visited the Middle East and Europe in July, meeting with the leaders of Britain, France and Germany and holding a major policy speech before an estimated 200,000 people in Berlin. Polls have shown Obama would win in a landslide if the US election was up to Europeans.

But McCain would "rather spend his time creating 200,000 jobs in America than speaking to 200,000 Germans in Berlin," Minnesota Senator Norm Coleman said at the Republican Convention.

Nonetheless, the derision hasn't stopped officials from the European People's Party, a center-right coalition of national conservative parties from across Europe, from traveling to St. Paul, Minnesota, to endorse McCain.

Former Belgian Prime Minister Wilfried Martens, who has served as EPP president since 1992, led the delegation.

"Despite the wave of Obama-mania in Europe, the EPP is one of the few European voices that have openly supported John McCain," he said.

Part of their affection for McCain comes from his long involvement in the International Republican Institute, a democracy-building group.

"We got to know him as someone who is very strongly interested in trans-Atlantic relations," Martens said.

Current US President George W. Bush is remarkably unpopular in Western Europe, which "of course is why there is so much hype around Obama," Martens said. But the Illinois senator, with only four years in office, "lacks the experience of John McCain." 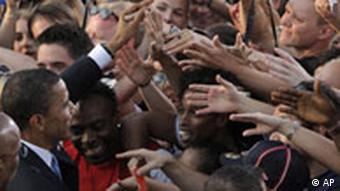 Obama was swarmed by admirers in Berlin

Even before to the convention, Obama's Berlin speech had been derided by McCain and Republicans in commercials that painted Obama as the "biggest celebrity in the world" and mocked Europeans for fawning over the Democratic candidate.

McCain made his own trip to Europe shortly after capturing enough votes for the nomination in March. He met with European leaders but gave no public speeches. McCain is also a regular at the annual Munich Conference on Security Policy.

EPP officials cite McCain's position on climate change, which proposes an energy policy that includes renewable energy sources, as another hopeful sign for his relations with European allies, if elected.

McCain, who will accept the party's nomination Thursday night, has in the past promised a renewed focus on US allies, promising not to follow the go-it-alone strategy of the Bush administration if he wins the Nov. 4 election and becomes president.

US presidential candidate John McCain's choice of greenhorn Alaska Governor Sarah Palin as a running mate took many by surprise. A German expert on US politics called the choice "risky, but very good." (01.09.2008)

John McCain is the presumptive nominee for the Republican Party. For his running mate, he has chosen Sarah Palin, a governor with little political experience, and this may be his downfall, says DW's Daniel Scheschkewitz. (01.09.2008)

McCain Would Be Good for Trans-Atlantic Trade, Says Expert

John McCain's nomination is nearly certain, but he's yet to win his party's full support. Republicans tend toward unilateralism, but McCain as president could have perks for Germany, says expert Stormy-Annika Mildner. (01.09.2008)