UK Prime Minister Theresa May has ruled out any negotiations over Gibraltar's sovereignty. May and European Council President Donald Tusk have held their first face-to-face talks since the UK triggered Brexit last week. 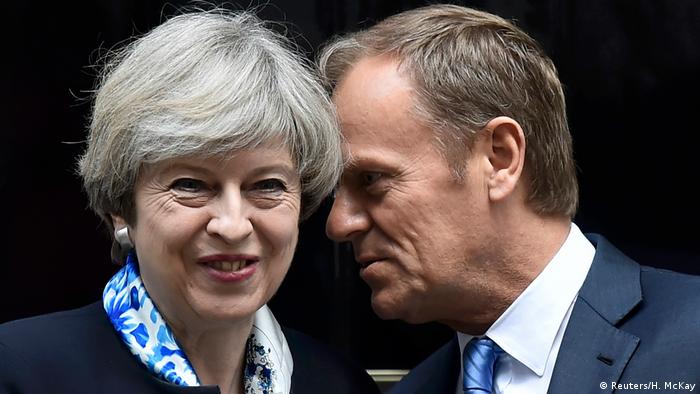 However, as the two leaders met in London for their first face-to-face meeting since the Prime Minister triggered Article 50 last week, formally launching Brexit, the tiny British enclave of Gibraltar continued to overshadow proceedings.

May made clear to Tusk that Britain would not make any concessions over its territory located off Spanish southern coast, adding that she would seek the best possible Brexit deal for Gibraltar. In a statement, May's office said that "there would be no negotiation on the sovereignty of Gibraltar without the consent of its people."

In the EU's draft joint position for the upcoming divorce talks, EU officials included a demand that any Brexit deal would not apply to Gibraltar without a second agreement between the UK and Spain. The clause effectively means that Madrid could block Gibraltar's access to any trade deal negotiated between Britain and the remaining 27 EU member states.

Also in the EU's Brexit demands, which the European Parliament approved on Wednesday, is a key clause calling for "substantial progress" to be made on any exit deal before any negotiations on a future trade relationship can begin. May had hoped to hold both negotiations in tandem.

Although Gibraltar voted overwhelming to remain in the European Union, there have no been no serious calls from the territory for a plebiscite on independence from the UK. The last such vote, in 2002, saw Gibraltarians reject the idea of the UK and Spain sharing sovereignty of the enclave by 99 percent to 1 percent.

The EU's position on Gibraltar prompted outrage among some Westminster officials, with former Conservative party leader Michael Howard saying May would be prepared to go to war to defend them.

Any failure to reach an agreement could see a "hard border" seperate the British enclave from the rest of Spain.

However, May and Tusk sought to lower tensions in their two-hour meeting.

"They agreed to stay in regular contact throughout the Brexit process to keep a constructive approach and seek to lower tensions that may arise, also when talks on some issues like Gibraltar inevitably will become difficult," an EU official said, speaking on condition of anonymity.

May and Tusk's talks coincided with German Chancellor Angela Merkel's meeting with the Prime Minister of the Irish Republic, Enda Kenny, in Berlin. Merkel and Kenny agreed that the UK's divorce from the EU must not undermine peace in Northern Ireland or lead to a "hard border" once again dividing the North from the Republic.

"As demonstrated by recent developments, the peace and stability there remains in a fragile state," Kenny said ahead of his meeting with the chancellor. "It is therefore critical that there is no return to a hard border."