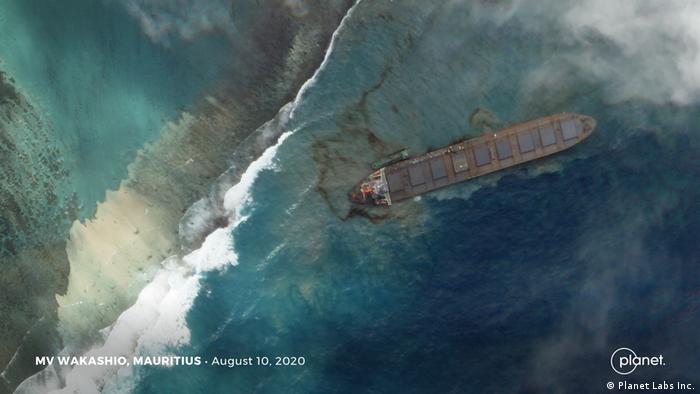 After a Japanese-owned oil tanker struck a reef off Mauritius on July 25, a prolonged period of inaction is threatening to become an ecological disaster.

Carrying nearly 4,000 metric tons of fuel oil, the tanker ran aground near Pointe d'Esny on the island in the Indian Ocean.

More than 1,000 tons of fuel leaked from a crack in the vessel’s hull, leading the Mauritius government to declare a state of environmental emergency.

"Local authorities failed to do enough to prevent what is now the worst ecological disaster in Mauritius," blogger Ish Sookun wrote in a post on August 8. "They started putting buoys and barriers to protect the shore only after the first signs of the oil spill became apparent."

French President Emmanuel Macron responded to calls for international help, sending military aircraft from the neighboring island of Reunion carrying pollution-control equipment and a naval vessel with booms and absorbents.

According to the Mauritius government, most of the oil that didn't spill from the stricken tanker, has now been removed.

"Thousands of species around the pristine lagoons of Blue Bay, Pointe d’Esny and Mahebourg are at risk of drowning in a sea of pollution, with dire consequences for Mauritius' economy, food security and health," said Greenpeace in a statement.

The community has taken matters into its own hands, with hundreds of volunteers building sugar cane pulp buoys and placing them in the water "to try to absorb and contain the oil which had already spread in our lagoons," Sookun reported.

More recently, human hair, which is said to be a superior oil absorber, was added to the mix, with locals donating their locks to fill the hand-made booms.

How to tackle oil spills

The method for tackling oil spills depends on several factors, including the type and amount of oil in question, location and weather conditions.

"Once the oil comes to shore, the more intensive the cleaning technique. You can risk causing further damage," said Nicky Cariglia, an independent consultant at Marittima, who specializes in marine pollution.

"If you wanted to remove all traces of oil, the techniques available become increasingly aggressive the less oil that remains. In mangroves, you would have the added risk of causing damage by trampling," Cariglia told DW. Highly sensitive mangrove ecosystems line the Mauritius east coast that is threatened by the current spill.

Because oil normally has a lower density than water, it floats on the surface of the ocean. This means that for clean-up action to be most effective, it should happen very quickly after a spill, before the oil disperses.

1. Scooping it all up

One method of controlling oil spills at sea, which was used after the Grande America cargo vessel sank in March 2019  some 300 kilometers (186 miles) off the French coast, is essentially scooping up the oil from the water's surface.

This is done using so-called booms, which act like a barrier to prevent the oil from spreading. Once it's contained, boats equipped with so-called skimmer machines can suck up the oil and separate it from the water. After being processed, the oil can even be re-used. 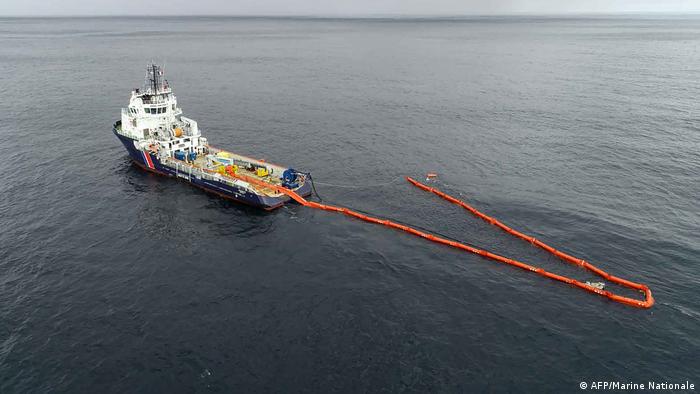 It seems like a simple method, but it only works when the oil is in one place — and under the right conditions.

"Encountering enough oil can be difficult," said response adviser Cariglia. When that's the case, the specialized vessels needed for the process can also make this an expensive and logistically challenging method.

In certain conditions, burning the oil off the water's surface can be the most appropriate method. In arctic or ice-covered waters, for example, it might be the only option.

In situ burning (ISB) would also be used to tackle an uncontrolled oil leak, where a lot of oil is spilling fast. When the Deepwater Horizon offshore oil rig caught fire and sank in April 2010, oil gushed from the seabed causing the largest accidental oil spill in history. ISB proved to be a highly effective technique in responding to the disaster. 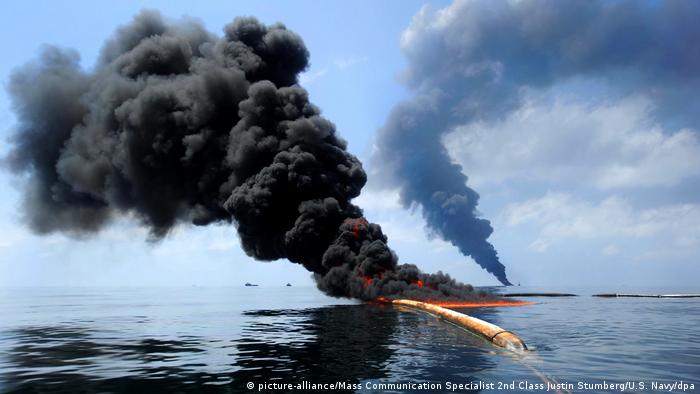 But the method also produces toxic fumes which can have a negative impact on the environment.

And it comes with challenges, too. "It can be difficult to herd enough oil to make it thick enough to burn," Cariglia said. "If the oil had dispersed over many days, it would not be an option."

Absorbents can be kinder to the environment: They act like a sponge to soak up the spilled oil. But they're more useful for clearing small amounts of oil on land, and are not usually effective in tackling a spill out at sea. In fact, employing these materials on the water can create further pollution.

"Recovering and disposing of these oiled materials requires a lot of energy," Cariglia said. "There's a risk that oiled debris will get lost at sea." 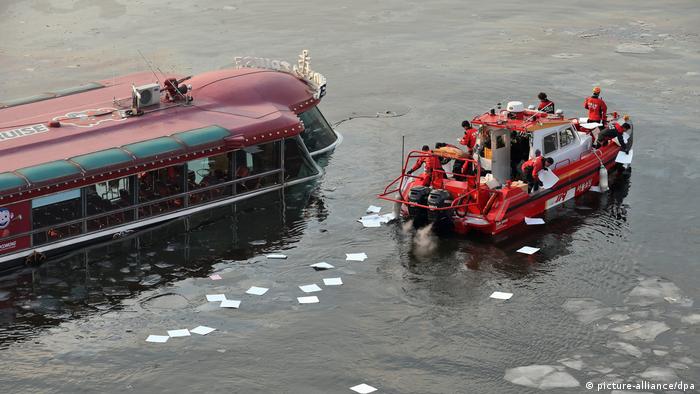 Experts also disagree over the effectiveness of different absorbent materials, which can range from natural products such as straw to highly engineered synthetics developed by scientists for the purpose of tackling oil spills.

Cariglia is wary of solutions purporting to suck up slicks. "It's not that they don't work," she said. "In lab experiments, they can work very well. But in real life, the oil has spread at sea."

4. Letting nature take care of itself

When the area of the oil spill is difficult to reach or very far out to sea, nature itself can help tackle the issue. Wind and waves will naturally disperse the oil over time, parts of it will evaporate, and naturally occurring microbes will also do their work to start breaking down the oil.

But this is a slow and unreliable process that needs to be closely monitored and "should not be confused with 'sitting down and doing nothing,'" according to Marine Insight, a maritime industry information site.

Chemical agents can also be used to aid this process. Cariglia is keen to allay environmental fears. "Toxicity tests are designed so that the only things that are approved are milder than the soap you would use at home," she told DW.

Though the dispersants themselves are not toxic, environmental problems can occur when they are used in sheltered or shallow locations. In that situation, using dispersants can mean that the oil spreads around more of the delicate marine environment. "For example, in locations where there are coral reefs, it would be better if the oil stayed on the surface," Cariglia said.

When it comes to tackling oil spills, she added, "there is no single miracle cure."

Mauritius has declared a "state of environmental emergency" and asked France for help after an oil spill from a Japanese-owned ship near vulnerable waters.

Three weeks after a cargo ship ran aground, efforts are being made to prevent an oil leak onto the world's largest raised coral atoll becoming an ecological disaster in the Solomon Islands. The area is a UNESCO site. (03.03.2019)