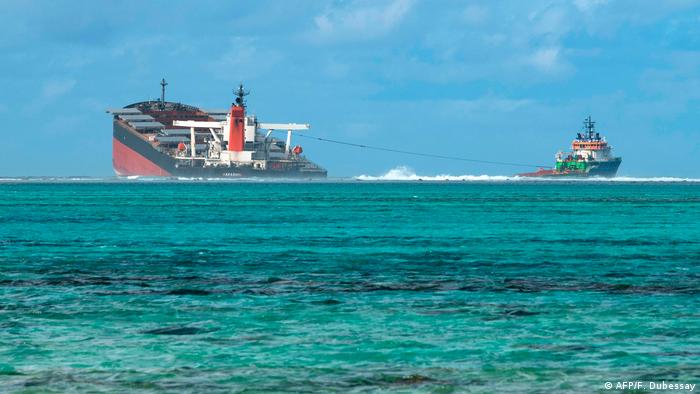 Mauritius authorities on Tuesday arrested the captain of a Japanese-owned bulk carrier that struck a protected coral reef last month and caused a massive oil spill, police said on Tuesday.

"We have arrested the captain of the vessel and another member of the crew. After having been heard by the court they have been denied bail and are still in detention," Inspector Siva Coothen told Reuters.

The MV Wakashio struck the coral reef off the Indian Ocean island nation on July 25. Some 1,000 tons of oil began spilling into the pristine waters on August 6, prompting the government to declare a state of "environmental emergency."

Some scientists and environmental groups have called the incident the country's worst ecological disaster.

The ship later split in two but emergency crews had removed most of the remaining oil from the carrier before it happened.

Experts from France, Japan and the United Nations are involved in the clean-up effort.

A Japanese Environment Ministry official said an additional team left for Mauritius from Japan on Wednesday to assess the leak's impact on local coral reefs.

The Mauritius government said it is seeking compensation from Nagashiki Shipping Co. Ltd, one of the listed owners of the ship. There are fears the spill will hit the tourism industry that the island population relies heavily on.

The Japanese company that owns the ship has also launched its own investigation.