Pope Francis and millions in Manila gathered for an outdoor Mass on the last full day of the pontiff's trip. He read a brief prayer in English to the vast crowd in the capital of the predominantly Catholic country. 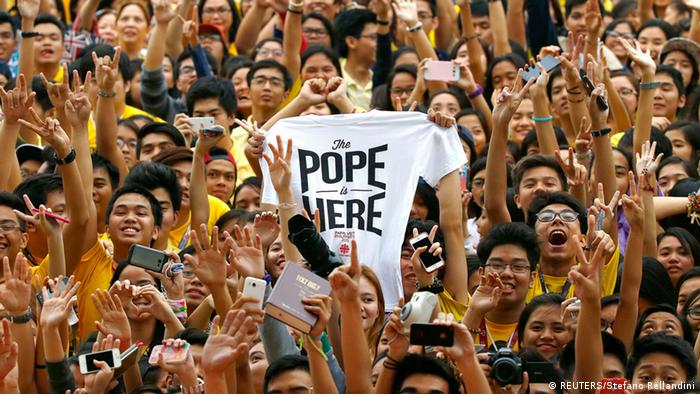 Pope Francis celebrated Mass with a huge crowd in Rizal Park on Sunday, in a ceremony started in song and a short blessing in English read out by the pope. Bells tolled a few minutes into the ceremony to signal the start of the Eucharist.

Manila's faithful braved stormy weather to attend the last major event of the pope's five-day visit, even camping out overnight in some cases. Francis Tolentino, chairman of the Metropolitan Manila Development Authority, estimated in comments to the Associated Press that roughly 3 million people had crammed into Rizal Park.

"It doesn't matter to us," one woman said on local television when asked about the rain. "It's as if we were being blessed with holy water."

Officials later estimated that a total of 6 million people had either attended the Mass or lined the motorcade route along which the popemobile traveled. That figure, if accurate, would beat the previous papal record, also set in Manila's Rizal Park, by Pope John Paul II.

The Vatican also said on Sunday that the pope held a 20-minute meeting with the father of a young Catholic girl who died while helping to organize his Mass in typhoon-hit Tacloban. The volunteer's father was overwhelmed by the loss, Vatican spokesman Federico Lombardi said, but was "consoled thinking that she had helped prepare the meeting of the people with the pope." 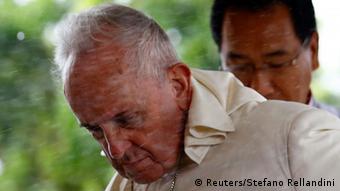 The rains acccompanied Pope Francis on his trip

Francis also opened his meeting at Manila's main Catholic University of Santo Tomas with a minute's silence for the girl. There, the pontiff lodged displeasure that only one girl was among a group of people allowed an audience with him.

"That's too few," the pope complained. "We are often too macho and don't allow women any room. But they see things with a different viewpoint and can ask questions which we men cannot even understand. When the next pope comes, please have more women and girls among your numbers!"

The one girl who could ask a question, a 12-year-old who had grown up on the streets, moved the pope greatly, he later said. Glyzelle Palomar explained how she had been confronted by drugs and prostitution on the streets, and tearfully asked "why is God allowing something like this to happen, even to innocent children?"

The pontiff could not offer a direct reply, but said in his remarks later that only people capable of crying were also capable of voicing the important questions. He said that marginalized people, those who have fallen by the wayside or have been "discarded," can cry: "But those who are living a life that is more or less without need, we don't know how to cry."

The former Bishop of Buenos Aires, born Jorge Maria Bergoglio, had lamented poverty and corruption in the Philippines earlier in his visit, during his meeting with President Benigno Aquino. Around one in four people live on the equivalent of $0.60 (roughly 50 euro cents) per day, according to a recent poverty study. About 80 percent of the roughly 100 million people inhabitants of the Philippines are thought to be Catholic, making the country a key Asian outpost for the Vatican.