Mass protests in Romania: Stop corruption! | Europe | News and current affairs from around the continent | DW | 21.01.2018

Up to 100,000 people have taken to the streets in Romania to support the independence of justice — against the ruling Social Democrats. Some marched 450 kilometers in protest. Cristian Stefanescu reports from Bucharest. 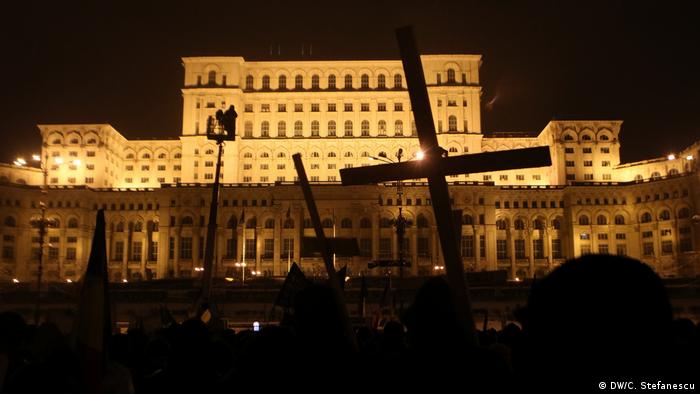 In the past, only stars like AC/DC and Andre Rieu have managed to fill the huge Piata Constitutiei square in Bucharest with tens of thousands of people. At the mass protests on Saturday, not only was the square full but so was the gigantic boulevard leading to the "Palace of the People," the parliament building.

The boulevard was built during the dictatorship to make Romanians feel small and humble in front of their omnipotent leaders. It takes many Romanians to defy this feeling in front of former authoritarian leader Nicolae Ceausescu's monstrous "palace" — and more than 60,000 rallied to do so.

There were also protests in other towns as up to 100,000 participants gathered nationwide, united by their dissatisfaction with the way their country is being governed.

Ten protesters had made headlines for 11 days in a row before the mass protests: They walked to Bucharest from their hometown of Cluj in Transylvania.

On the evening before the protests, Sorin Bobis, who initiated this march to Bucharest in the cold winter weather, told DW: "If there are people who can walk for 450 kilometers (278 km) from Cluj to make their voice heard in Bucharest when they say they are dissatisfied with the government, there will surely be a few thousand inhabitants of Bucharest willing to leave their homes on a weekend and take part in the protest." 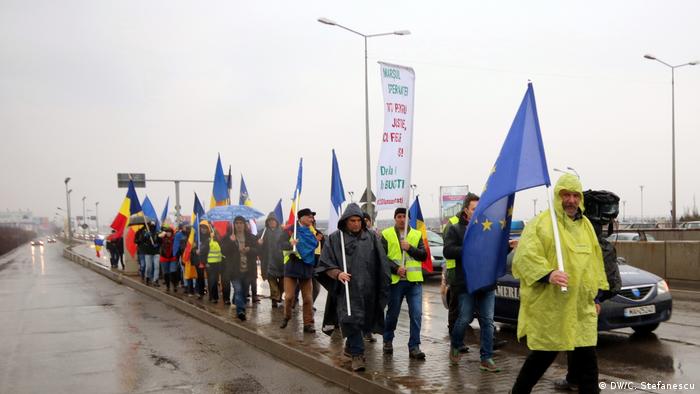 Sorin Bobis (in front) on his long walk to Bucharest

When Bobis reached Bucharest on Saturday, even more people joined him — including two blind men who had also walked from a smaller city in Transylvania to join the protest, which had been planned in December. Back then, the parliament adopted changes to the justice laws that critics believed challenged the independence and efficiency of the judiciary in Romania.

Protesters were angered in particular by a series of proposed amendments: Suspects would be present at a victim's hearing in court; house searches and collection of evidence would only be possible after a suspect had been notified; video footage would be eliminated from investigations, and those suspected of corruption would be exempt from investigative custody.

Some members of parliament who are themselves facing problems with the law have pushed for a decriminalization of abuse of power if the financial loss does not exceed a certain amount.

Because of all this — and the ongoing political chaos — tens of thousands of citizens have lost their patience with the current government, led by a coalition of the Social Democratic Party (PSD) and its smaller partner, ALDE. 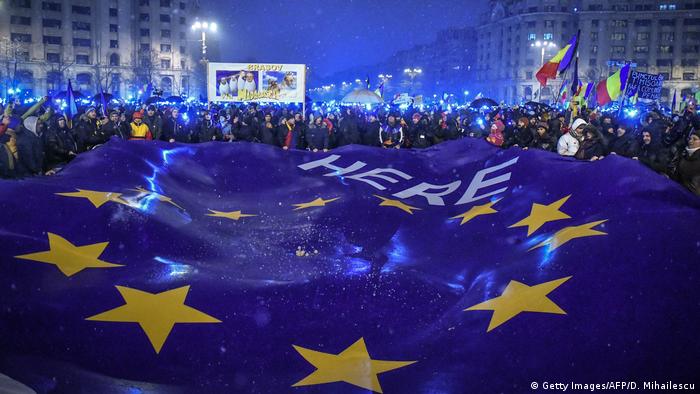 Even ethnic divides seemed to be forgotten on Saturday when members of the Hungarian minority who want an autonomous region joined the protests in Bucharest. When corruption becomes the common enemy, language barriers don't matter anymore: Peter Eckstein-Kovacs, former president of the Law Commission in Romania's senate, brought Romanians and Hungarians alike from Cluj to Bucharest. Even their placards were bilingual. "We want justice — liars shouldn't be in power," Eckstein-Kovacs, a member of UDMR, a political party representing the Hungarian minority in Romania, told DW.

Eckstein-Kovacs was one of the few politicians who were present at the mass protests. The demonstrators found locked doors when they approached the headquarters of the two parties who form the ruling coalition — PSD and ALDE. Only two worried-looking porters glanced at the protesters from inside the buildings. Closed doors: This was the way the ruling parties chose to answer, instead of communicating with the disgruntled citizens.

'First and foremost, you're a citizen'

"In a situation like this, a politician's place is among the people," MEP Siegfried Muresan from the European People's Party told DW. "Being a politician is only something temporary. First and foremost, you're a citizen." The young Romanian-born politician came to Bucharest to take part in the protests after having negotiated the EU budget in Brussels. Former Romanian president Traian Basescu even recommended him for the office of prime minister, after the second Social Democrat premier had resigned in less than a year. 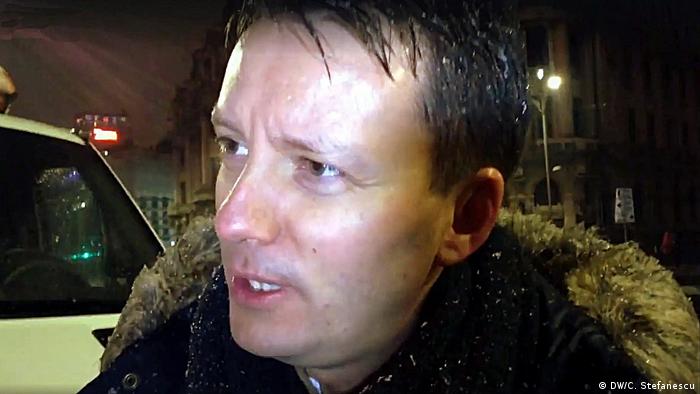 Mihai Tudose announced his resignation on Monday, after his party, the PSD, withdrew its support for him.

"Last year, they wanted amnesty laws," Siegfried Muresan explained. "Now they want to weaken the Anti-Corruption Directorate (DNA), to curtail the independence of prosecutors and judges. The people have taken to the streets to send a clear signal to the politicians: We don't accept this."

A European Parliament lawmaker has been tapped by the president to lead Romania's government. Her predecessor resigned in the wake of a fallout with leadership within his own Social Democratic party. (17.01.2018)