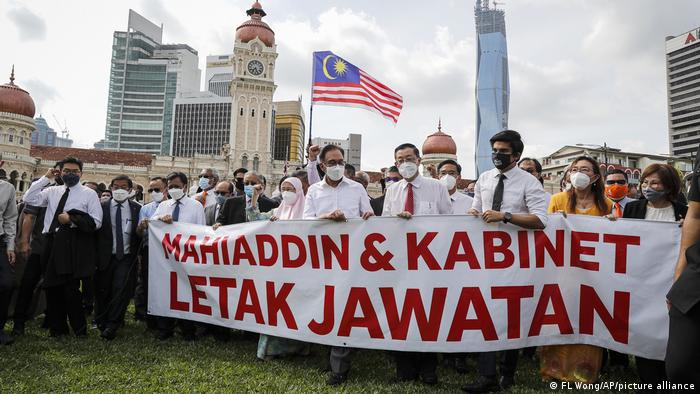 Malaysian security forces on Monday blocked opposition lawmakers from entering the parliament, as the deputies protested a two-week lockdown of the top legislative body. The government claims the parliament was closed due to coronavirus risk.

Around 100 lawmakers gathered near the parliament, demanding the resignation of Prime Minister Muhyiddin Yassin and his cabinet.

Political tensions have been rising in Malaysia over the government's handling of the pandemic. Critics claim Muhyiddin is using COVID measures as an excuse to cling to power.

Two-time former Prime Minister Mahathir Mohamad and longtime rival Anwar Ibrahim stood side by side in the protests — a rare sight since the collapse of their coalition government last year.

Why was the parliament shut down?

Monday's parliament meeting was set to be the last of a session convened at short notice after the biggest party in Muhyiddin's coalition asked him to resign.

The authorities announced they would be closing the parliament after 11 coronavirus infections were detected in the building.

Malaysia's Health Ministry said the legislature was deemed a high-risk venue, as four of the COVID cases detected among staff and others were suspected to be resulting from the fast-spreading delta variant.

But lawmakers and activists questioned the timing of the announcement.

On Thursday, King Sultan Abdullah Sultan Abdullah slammed Muhyiddin's government for misleading lawmakers on the status of mandates they issued during the seven-month COVID-19 state of emergency.

The opposition then immediately filed a motion of no confidence against Muhyiddin. It was expected to have been raised Monday. Over the weekend, hundreds of protesters called on Muhyiddin to resign

What did lawmakers say?

Anwar, the opposition leader, said that Muhyiddin's government had "lost its legitimacy," and no longer commanded majority support in parliament.

"We are protesting today because we want to protect the people," he added.

Syed Saddiq, an opposition lawmaker and a former sports minister, argued that the closure of the parliament made no sense, as "almost all MPs and officials have received two doses of vaccine."

Mahathir, who was the world's oldest government head until February 2020, said Muhyiddin "refuses to step down" despite mass protests against his government.

"This government has failed to carry out its duties but is continuing to cling to power," Mahathir told reporters.

The former prime minister demanded the cabinet's resignation, arguing that this was the only solution to end "this prolonged political turmoil."