Prime Minister Mahathir's party has pulled out of a coalition with his long-time arch rival Anwar Ibrahim. The decision is the latest chapter in the pair's political tug-of-war. 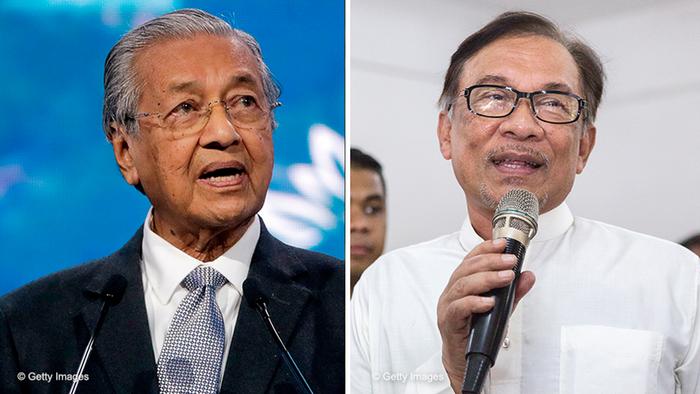 Politics in Malaysia returned to chaos on Monday as Prime Minister Mahathir Mohamad submitted his resignation to the country's king.

The prime minister's office confirmed the decision in a short statement, saying the resignation letter was sent at 1 p.m. local time (0500 UTC). Mahathir also quit as chairman of his Bersatu party.

Minutes before the resignation, Bersatu confirmed it had pulled out of the four-party Alliance of Hope coalition that unexpectedly ousted the government of former leader Najib Razak in 2018.

As part of the coalition deal, 94-year-old Mahathir had promised that his longtime arch-rival Anwar Ibrahim would succeed him as prime minister in a year or two.

However, rumors emerged at the weekend that the Bersatu party was trying to form a new government and thwart Ibrahim's succession bid.

The move by the Bersatu party would allow Mahathir — the world's oldest prime minister — to remain in power for the full five-year term.

Mahathir, who first held the position of prime minister from 1981 to 2003, had repeatedly refused to say when he will transfer power.

His stalling has reignited his decades-old feud with the 72-year-old Anwar. The pair were Malaysia's top two leaders during Mahathir's first stint as premier but fell out politically.

Anwar on Sunday denounced a "betrayal" by his coalition partners that effectively annuls their historic election victory that ousted another coalition that had ruled Malaysia since independence.

The former opposition icon — who was jailed for years on widely-criticized sodomy charges — was also expected to meet the king on Monday.

Ironically, Bersatu's weekend maneuvers would restore to power UMNO —  the Malay party of disgraced former leader Najib Razak, who with several of his party leaders is standing trial for corruption.

It would also propel to national power a fundamentalist Islamic party that rules two states and champions Islamic laws.

It was not immediately clear if Mahathir could form another government with the support of other parties.

The Reuters news agency cited sources as saying that a faction in Anwar's party had met officials from the other three parties in efforts to form a new coalition.

With only 30 to 80 remaining around the world, the death of a 25-year-old female Sumatran rhino means the animal has become extinct in Malaysia. Decades of poaching had left the animals critically endangered. (23.11.2019)

An animated movie made by DreamWorks and a Chinese studio has been blocked by Malaysian authorities over a scene showing a map of the South China Sea. The cartoon, titled "Abominable," tells a story of girl and a Yeti. (20.10.2019)

In Kuala Lumpur, next to skyscrapers, you'll find traditional mosques, churches and Buddhist temples. The city is a melting pot of nationalities, and that cultural diversity is especially apparent when it comes to food. (10.01.2020)