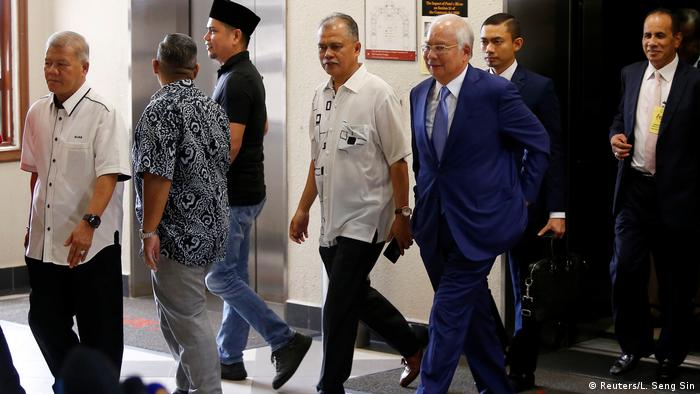 On the opening day of the second trial into the 1MDB scandal, chief prosecutor Gopal Sri Ram described how complex financial transactions between 2011 and 2014 enabled Najib to "to obtain gratification for himself."

Malaysian and US authorities allege about $4.5 billion (€5 billion) was siphoned off from the fund established by Najib in 2009 to promote economic development.

When the scandal first broke in 2015, Najib and his inner circle were put under enormous pressure. The attorney general later cleared Najib of any crime, saying that the $681 million in his bank account was donated by Saudi princes ahead of 2013 elections and most of it was returned.

Gopal accused the disgraced former prime minister of abusing his power to throttle an investigation.

"He interfered with the course of investigation of the case which has come to be known as the 1MDB scandal. He took active steps to effect a coverup of his criminal acts," Gopal told the Kuala Lumpur High Court.

He told the court that prosecutors would show fugitive financier Low Taek Jho, better known as Jho Low, was Najib's "alter ego" and that the two cooperated in the scam and coverup.

Najib was voted out of office last year amid public anger at the scandal. Prime Minister Mahathir Mohamad has vowed to prosecute those involved and recover the stolen funds. Najib claims he is innocent and the trails are political revenge.

The trail that began on Wednesday is the second but most significant. Najib faces four counts of abuse of power and 21 other charges of receiving, using and transferring illicit funds to pilfer 2.3 billion ringgit ($546 million) from 1MDB  between 2011 to 2014.

On Tuesday, prosecutors finished their arguments in the first trial that started five months ago. That trial involves seven charges linked to the transfer of money from a former 1MDB subsidiary to Najib's bank accounts. A judge will decide on November 11 whether to acquit him or call on him to enter his defense.

The former Malaysian Prime Minister has been hit with new charges related to a huge financial scandal. If he is convicted he faces up to 20 years in prison for each charge. (08.08.2018)

Malaysian police say cash and luxury items seized in raids on scandal-plagued ex-PM Najib Razak were valued at €234.3 million. Razak and associates are being investigated for fraud linked to state fund 1MDB. (27.06.2018)