Anwar Ibrahim says he has a parliamentary majority to form a new government. His claim comes less than seven months after the collapse of the previous administration of Mahathir Mohamad. 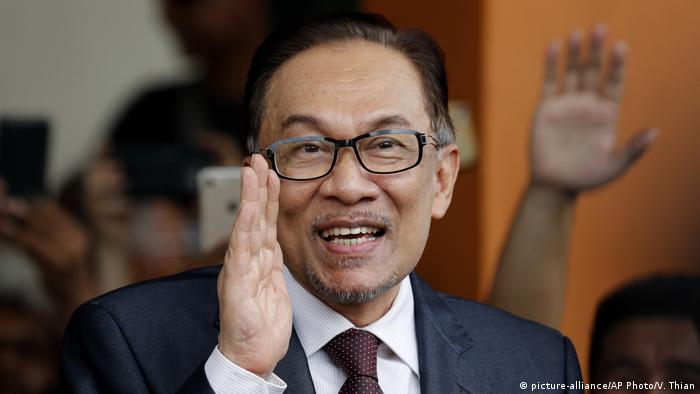 Malaysian opposition leader Anwar Ibrahim said Wednesday he had secured a majority in Parliament to form a new government that is both "strong and stable."

"I am not talking about [a majority of] four, five or six...but much more than that,'' said Anwar, who did not give any firm numbers but said it was close to two thirds of the 222 lawmakers.

"They [lawmakers] recognize that the country must have strong, stable and accountable leadership to manage the crisis and to do so with compassion and concern for the plight of all people who are struggling in this pandemic economy," Anwar said in a statement.

Anwar said that he had been granted an audience with the king to confirm his appointment, but that the meeting had been postponed as the king is in hospital.

How likely is the new government?

There was no immediate reaction from Muhyiddin, who is set to give a televised address later Wednesday.

Should Muhyiddin get an audience with the king before Ibrahim, he could advise him to dissolve parliament and order snap national elections. Muhyiddin came to power in March, and his opponents have accused him of grabbing power by shifting alliances instead of earning it through votes.

Who is Anwar Ibrahim?

Anwar, 73, has had a political career rocked by a number of scandals, in a country that has made headlines for its corrupt officials. He was jailed for 10 years for sodomy and corruption after a row with the government, in an event that his supporters have described as a plot to destroy his political career.

He was granted a royal pardon in 2018, as part of the deal with Mahathir for him to take on the premiership.