Police in Malaysia detained one woman thought to have assassinated the older half-brother of North Korean leader Kim Jong-un. Authorities are searching for a second woman who escaped with suspect Doan Thi Huong. 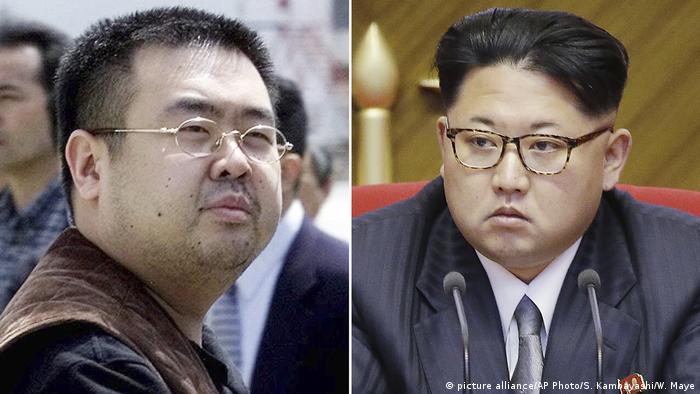 Malaysian authorities said on Wednesday that they had arrested a  woman carrying a Vietnamese passport in connection with the death of North Korean leader Kim Jong-un's older half brother, Kim Jong-nam.

Kim collapsed at the low budget terminal of Kuala Lumpur International Airport on Monday. He died on the way to the hospital, and reportedly told the emergency medical workers that someone had sprayed chemicals in his face.

"He told the receptionist at the departure hall that someone had grabbed his face from behind and splashed some liquid on him," police official Fadzil Ahmat told local newspaper "The Star." "He asked for help and was immediately sent to the airport's clinic. At this point, he was experiencing a headache and was on the verge of passing out."

A police statement named the suspect as 28-year-old Doan Thi Huong, who was "positively identified from the CCTV footage at the airport and was alone at the time of the arrest." "The Star," citing a police source, said that authorities were searching for a second female accomplice and "several other suspects" in connection with the killing.

South Korean intelligence officials were quick to blame Kim Jong-un for the assassination, citing a longtime feud between the half-brothers.  According to Seoul, the leader experienced "paranoia" about his sibling and was suspicious that Beijing tacitly supported him by allowing him to live in its autonomous territory of Macau.

Indeed, at one time it was Kim Jong-nam who was the heir apparent in Pyongyang as the eldest son of late President Kim Jong-il. However, he lost favor during a much-publicized botched attempt to enter Japan with a fake passport in 2001. The passport gave the alias Pang Xiong, which can mean "Fat Bear" in Mandarin. After being deported to China, he told officials he had been trying to visit Tokyo Disneyland with his son.

Kim Jong-nam had been living in exile in Macau for at least five years before his death, and was trying to return there when he was killed. In exile, Kim Jong-nam voiced some very muted criticism of his brother's regime. He told a Japanese journalist " without reforms, North Korea will collapse, and when such changes take place, the regime will collapse."

If his death was ordered by his brother, it would be the latest in a series of high-profile assignations by North Korean agents that have included members of the Kim family. In 1997, Kim Jong-nam's cousin Yi Han-yong, a high-profile defector, was shot dead outside his home in Seoul. In 2013, Kim Jong-un's uncle by marriage, Jang Sung-taek, was abruptly stripped of his high-level defense duties, declared a counter-revolutionary and executed. Kim Jong-nam was himself allegedly the target of a botched assassination attempt in 2012.

South Korean intelligence has reported that Kim Jong-un ordered the assassination of his half-brother. Malaysia police have detained a woman holding a Vietnamese travel document who was identified on CCTV footage. (15.02.2017)

Pyongyang may be about to test an upgraded intercontinental ballistic missile (ICBM), South Korean media has reported, quoting officials. Experts on the country's nuclear program believe the claims to be creditable. (19.01.2017)