According to a recent poll, the major parties contesting in May's state election in North Rhine-Westphalia are unlikely to win a majority. A loss for the ruling CDU-FDP coalition could mean trouble on the federal level. 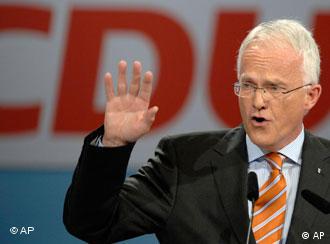 The crucial upcoming election in the German state of North Rhine-Westphalia is too close to call, according to a poll published in the German newspaper Bild am Sonntag.

The poll, commissioned by surveying firm Emnid, projects that in the election on May 9, neither the ruling Christian Democrat-Free Democrat coalition nor a partnership between the Social Democrats and the Greens will be able to land a majority.

According to the survey, Premier Juergen Ruettgers and his Christian Democrats (CDU) currently have 38 percent support, while the Free Democrats (FDP) sit at eight percent. The Social Democratic Party has the support of 32 percent of voters, with the Greens coming in at 12 percent.

The poll said the socialist Left party, in the state's political mix for the first time, currently has the support of seven percent of voters.

The Bild article noted that an SPD-Greens-Left government could become a reality, though SPD state leader Hannelore Kraft said her party would not consider such a coalition.

"The Left party in NRW is neither ready to govern nor does it want to govern," Kraft told the Bild am Sonntag.

The outcome of the election could have significant effects on Germany's national political landscape. If the current government is defeated, the ruling federal CDU-FDP coalition led by Chancellor Angela Merkel could lose its majority in the upper house of the German parliament, the Bundesrat.

Are German politicians for sale?

The president of the German parliament called for a review of party financing laws after revelations that business leaders paid for meetings with two state premiers. (02.03.2010)

While Chancellor Angela Merkel's partners in government have been languishing in the polls, the Greens have more supporters than ever. Their success has sparked talk of an alliance of unlikely bedfellows. (19.02.2010)

For the first time in four years, the German parliament will be divided into coherent political ideologies. But the new center-right partners will struggle to force their agenda in a straitened economy. (27.10.2009)