Magawa the rat wins bravery medal for sniffing out mines

UK charity PDSA has presented the African giant pouched rat with its Gold Medal for "life-saving devotion to duty." His work helping clear land mines in Cambodia makes him the first rat to win the prestigious award. 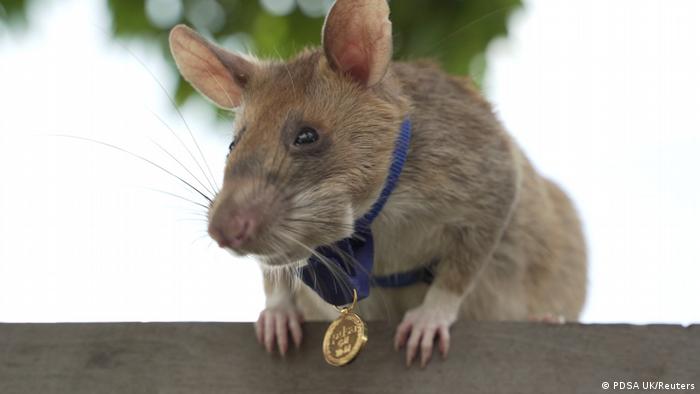 The UK veterinary charity PDSA awarded Magawa its Gold Medal for "life-saving devotion to duty, in the location and clearance of deadly land mines in Cambodia." He is the first rat ever to win the bravery gong.

Magawa, 7, has sniffed out 39 land mines and 28 unexploded munitions in his distinguished career.

He has cleared more than 141,000 square metres (1.5 million square feet) of land, or roughly 20 football pitches, in the southeast Asian country.

Leftover mines are a legacy of the nation's brutal civil war in the 1970s and 1980s.

Up to 6 million remain undiscovered, according to data from the Cambodian Mine Action Center (CMAC),

Mine-clearing NGO the Halo Trust says over 64,000 casualties and more than 25,000 amputees have been recorded in Cambodia since 1979. 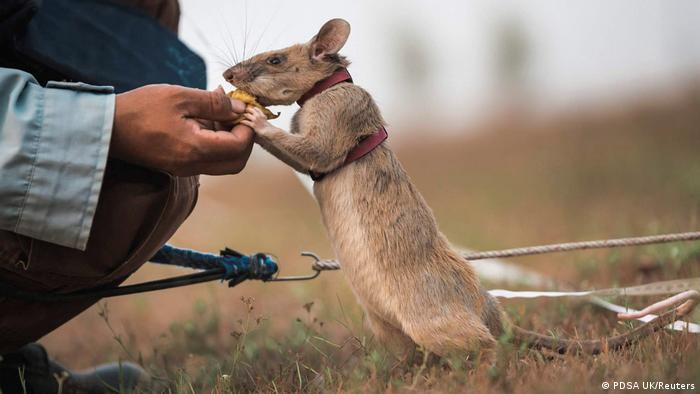 How does Magawa sniff out mines?

The rodents are taught to detect a chemical compound within the explosives and ignore scrap metal.

This means they can search for mines more quickly. Once they find an explosive, they scratch the top to alert their human co-workers. The training takes one year.

Magawa weighs just 1.2kg (2.6lb) and is 70cm (28in) long, making him small enough and light enough to walk over land mines without triggering them.

He can search the area of a tennis court in less than half an hour, something that would take a human with a metal detector up to four days, according to the Tanzania-based Belgian charity who trained him up.

"Magawa's work directly saves and changes the lives of men, women and children who are impacted by these landmines," PDSA director general Jan McLoughlin was quoted as saying by Britain's Press Association.

At the ripe old age of seven. Magawa is close to retiring from his heroic work.

The average life span of a giant African pouched rat is eight years, according to California's San Diego zoo.

Khmer Rouge genocide in Cambodia: Did justice take too long?

The conviction of former Khmer Rouge leaders for genocide is a symbolic human rights victory. However, the legal process has been criticized as being marred by corruption and delays. Ate Hoekstra reports from Phnom Penh.