′Macron needs to shed his image as president of the rich′ | Europe | News and current affairs from around the continent | DW | 07.05.2018 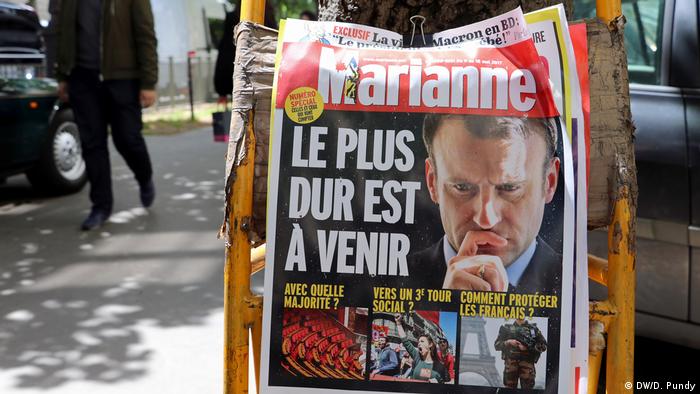 DW: Mr. Grossman, the non-French media devotes plenty of coverage to President Emmanuel Macron's many reforms and his tenacity when faced with resistance, as the ongoing rail worker strikes show. What do the French make of this?

Emiliano Grossman: Macron was viewed very positively when he took office. He still benefits from this now. He comes across as very dynamic and efficient. And his electoral victory certainly took the political establishment by surprise. But there are the first signs of a certain reform fatigue creeping in. His approval ratings have dropped considerably in recent weeks. That is not just linked to the rail worker strike which has been going on for weeks, there's also the "Sarkozy effect." Nicolas Sarkozy also began his presidency with a cascade of reforms but over time it became harder and harder for him to implement them. 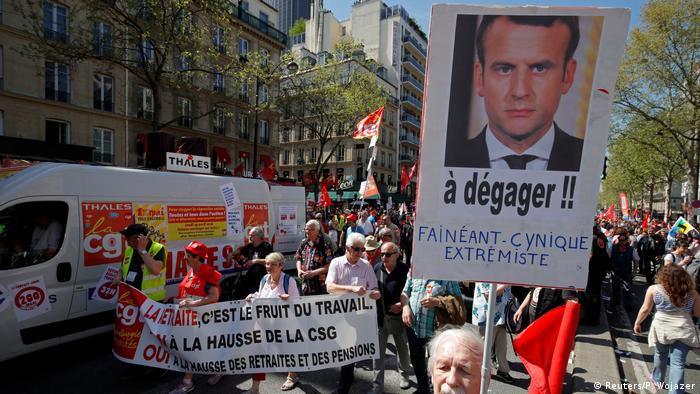 I think Macron is at a crossroads. Will he be one of those presidents who start out with grand ambitions and then grow very, very unpopular? Or will he overcome this critical phase and push through his reform agenda?

Which factors will determine that?

It will depend in large part on whether his reforms bear fruit. France's economic situation is currently better than one or two years ago, but Macron can hardly take credit for that. He would benefit if there were long-term improvements in the overall economic situation, growth in key sectors, and most importantly if companies created jobs. 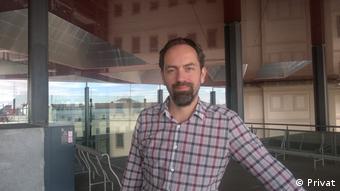 But there is also a factor that foreign observers might not be so aware of. Macron needs to shed his image as a "president of the rich." The reforms he has initiated have clearly benefited the well off and super rich. Right now, he is trying to scrap the "exit tax." It was introduced by Sarkozy's conservative government to make it harder for the rich to flee tax by moving to Belgium or Switzerland. It was not very successful but Macron wants to abolish the tax anyway for purely symbolic reasons.

The French are generally regarded as reluctant to carry out reforms. But in which areas do the French desire changes? And does that overlap with Macron's reform agenda?

Macron won the election because of his relatively radical reform agenda. I don't think any president in the past 10-15 years has begun his tenure enjoying so much support from the very start. So the situation is a little different to when his predecessors Hollande and Sarkozy took power. The French people's reluctance to undertake reforms or their outright aversion to them today is probably less pronounced than it was several years ago. But Macron needs to exploit this opportunity to carry out his reforms and then sell them well.

But it looks like he is only doing a mediocre job at that. According to surveys, 56 percent of Macron's compatriots are disappointing along with him. These ratings are better than those of Hollande and Sarkozy during their time, but they're not very good either. Was that to be expected?

I think the problem lies in the French political system which places too much emphasis on one single individual so that peoples' expectations of the president are just too high. The system was created in the 1950s to prevent France sliding into civil war. It worked, thanks to the charisma of Charles de Gaulle [who founded the Fifth Republic]. But none of his successors had his kind of personality, so falling approval ratings are practically systemic. 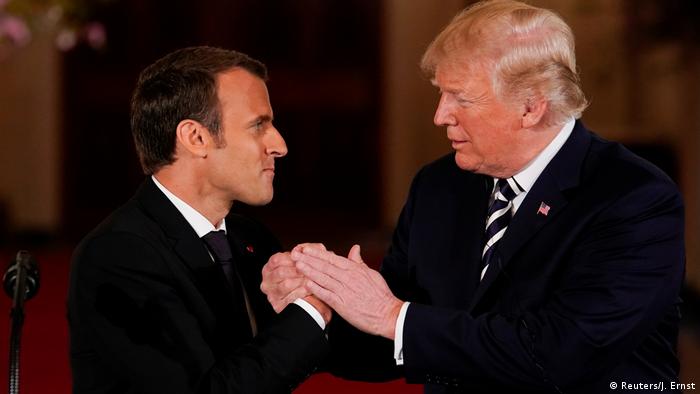 Speaking of de Gaulle: International observers also tend to notice many of Macron's public relations efforts. He seems to love grand gestures. What do his compatriots think of that?

I think many of these public relations events are quite popular. I personally am a little torn because these big gestures can also be deceptive. They can work in the short term but if no real substantial reforms follow, people may grow wary.

What about actual policies? Think Tank iFRAP graded Macron on his first year in office. They gave him a score of just 5.3 points out of 10 for his reform efforts so far. How come?

It is very hard to reform France. There are many structural obstacles. And Emmanuel Macron only briefly served as economy minister so he doesn't have much experience in the executive.

Do you think Macron will go down in history as a great reformer?

To be honest, I think it's far too early to say.

For years, the Germans told the French to emulate Germany's so-called Agenda 2010 reform program initiated by then Chancellor Gerhard Schröder. Now that Macron has been in office for a year, do you think there are more similarities or differences to Germany's previous reforms?

I think Macron would not want his policies to be compared to Schröder's Agenda 2010 reform program. He would rather be compared with others. But he is certainly ambitious enough to make his reforms as far-reaching as those carried out by Schröder.

The interview was conducted by Andreas Noll.

French railway workers are continuing their series of two-day protest strikes against the reform plans of President Emmanuel Macron. But a slight majority of the French people seem to be siding with the government. (28.04.2018)

From German Chancellor Angela Merkel to Syrian President Bashar Assad, planting trees has been a way for leaders to mark new beginnings or commemorate past events. DW looks at some significant tree-planting moments. (27.04.2018)