Bright colors are everywhere in downtown Skopje. Protests happen every evening at 6, and people are demanding change in what has become known as Macedonia's "Colorful Revolution," Kristina Ozimec reports from Skopje. 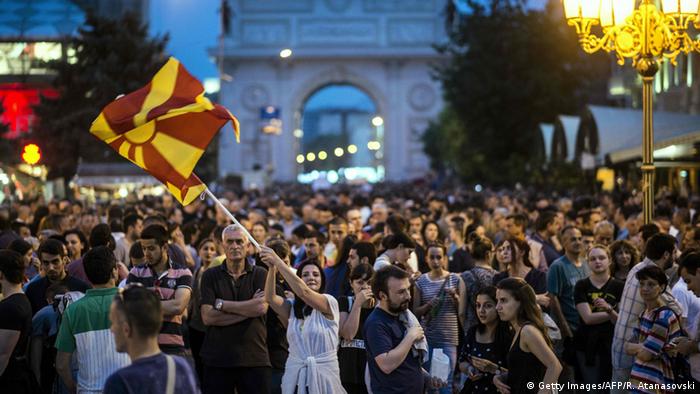 Branimir Jovanovic, an economics researcher at Italy's University of Turino, had no clue that a night in jail was in his near future when he returned to Macedonia two weeks ago. On April 13, the day protesters demolished the office of Macedonian President Gjorge Ivanov, Jovanovic and a dozen others were arrested - often in a very brutal fashion. Pictures of the academic covered in blood and being pushed around by the police spread on social media.

"I think my arrest was a true image of our unequal fight with the regime," Jovanovic told DW. "Us little people - who only have good intentions on our side, brave hearts and a clear mind - against them: the powerful, who have a lot of money, stolen from us, surveillance equipment, rubber bullets, smoke bombs and water cannons," he added. "But, just like many times in history, the heart will overcome the weapons and David will win again against Goliath."

The protests in the Republic of Macedonia started the day Ivanov announced his decision to pardon politicians currently charged with crimes or under investigation for them in the aftermath of a wiretapping scandal. Ivanov has been accused of coordinating with the ruling VMRO-DPMNE to protect party officials from prosecution. The president's move, called unconstitutional by pundits and citizens alike, has deepened Macedonia's tense political standoff. Ivanov's declaration is also considered a huge blow to Macedonia's newly established Special Prosecution, which has a mandate to investigate the accusations that the government has wiretapped more than 20,000 people. 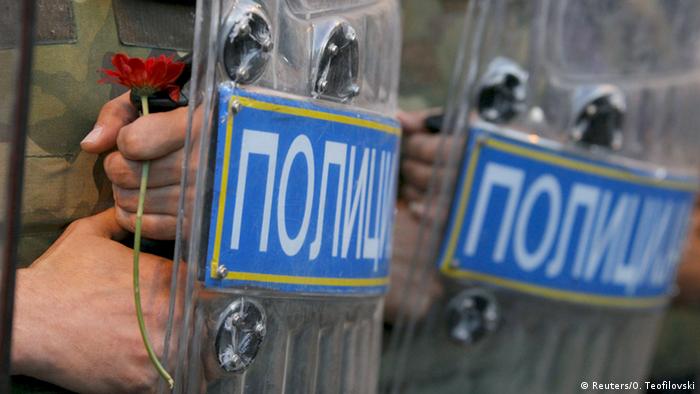 The atmosphere has become much more festive since the arrests of April 13. People started showing up with paintball guns, and the target of their artwork became the Porta Macedonia, a triumphal arch erected from 2011 to 2012 as part of the controversial "Skopje 2014" project, which cost the country over 600 million euros. Protesters consider the Porta Macedonia an icon of "Gruevism": a political philosophy named after Prime Minister Nikola Gruevski, who left office in an internationally brokered deal in January after what dissidents call a near decade of nationalism, surveillance and extravagance.

"The protesters, we are colorful ourselves - from different ethnic backgrounds, ages, genders and many other things," the economist Jovanovic said. "The colors are our answer against the grayness that this government has been pushing for years. Just like when they painted the bunkers in Albania after Enver Hoxha fell, we are giving color to the 'bunkers' that Gruevski and his gang made: the bunkers that occupied freedom of thought, the bunkers that hid the billions that they stole in the last 10 years. They dictated grayness; we give them color back. They forced uniformity; we give back variety."

The "Colorful Revolution" went viral on social media and in real life. The "Warrior on a Horse" fountain on Macedonia Square, which closely resembles Greece's Alexander the Great and cost about 10 million euros when it was constructed as part of Skopje 2014, was red for a day to symbolize the victims of the regime. Another night, it bubbled over after activists filled it with detergent. The Justice Ministry, the city council, the streets of the city center - all have been brightened by activists for the occasion.

Macedonians have been drawn to their revolution for a variety of reasons. A man who asked to be identified only as Stefan said he had taken to the streets to protest the treatment of LGBT people.

"The regime is completely homophobic, and we are marginalized," he said. "I've seen it get worse - and we have to change that. Society is patriarchal; it promotes these values. And this is especially visible in the oppression of women and LGBT people."

Roza Jovanova, whose two daughters have left Macedonia and now live in Germany, said she took to the streets because as an economist she fears that the state's borrowing could destroy the nation's economy. "The state became the biggest employer," Jovanova said. "The state gives the companies procurements, everything is controlled by the people who control the state, and honestly I am afraid how the younger generation will deal with all these problems - and where they will start: Do they start with the poverty? Do they start with the dictatorship and the complete immoral upside-down values it set? I don't know who will clean this mess up, and this takes time, and the world is racing ahead. We are not standing; we are drowning."

In spite of efforts in recent years by the national conservative government to divide Macedonians on ethnic lines, the Colorful Revolution has drawn a diverse group of revelers. Many have waved the Macedonian and Albanian flags together.

Ali, an ethnic Albanian holding a Macedonian flag, said he was attracted to the protests because injustice had become the norm for him and many of his compatriots. "They punish the everyday citizen if he doesn't pay tax for selling a couple of vegetables on the market," Ali said. "But they can now steal millions and be pardoned by the president. Not to mention the interethnic hate they spread all the time."

Protesters have vowed to continue waging their Colorful Revolution until the government addresses their demands: They want Ivanov to back off on his plan to pardon politicians charged with crimes - and they want him to resign as president. They have also requested the establishment of a special unit of the Criminal Court that would be responsible for cases under the jurisdiction of the Special Prosecution and the forming of a technocratic government to organize fair elections.