Voting the government out has become nearly impossible for Macedonians, EU mediator Peter Vanhoutte told DW ahead of his last day in office. The Balkan country can get back on track only with international support. 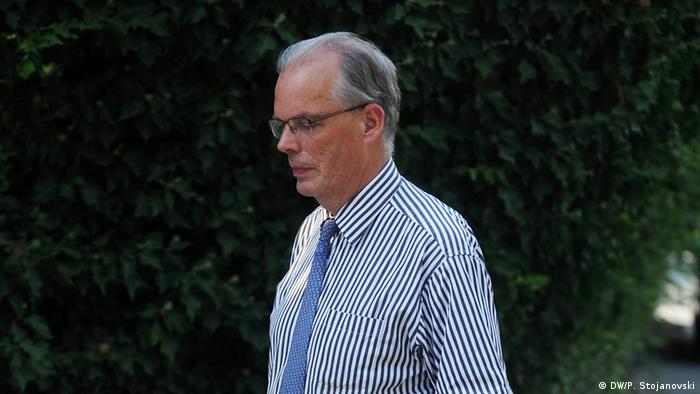 March 25 is Peter Vanhoutte's last day in office, and the Belgian diplomat is not happy. He arrived in the former Yugoslav Republic of Macedonia 10 months ago as the EU representative tasked with mediating between the warring political parties and helping the landlocked Balkan country reform its stuttering democracy.

"I am shocked by the current situation, the atmosphere of fear, suppression of freedom, by the high number of people currently in detention for the simple fact that they opposed this government or refused to obey its rules," Vanhoutte said.

The political crisis in Macedonia, an EU candidate country since 2005, began in January 2015, after the main opposition Social Democrats revealed evidence of mass wiretapping and widespread corruption in the government, ruled by the national-conservative VMRO-DPMNE. Massive protests by the opposition and various NGOs ensued, but to no avail. Fearing that the crisis might exacerbate ethnic tensions in the country and destabilize the whole region, the European Union decided to act. A group of experts led by the retired EU diplomat Reinhard Priebe prepared and published a report in June that noted serious deficiencies in the country, including various forms of government corruption, electoral fraud, blackmail, extortion, illegal surveillance and political influence over the judiciary, among other serious issues.

As an experienced Belgian diplomat and former member of parliament, Vanhoutte was sent to Skopje to help with the implementation of necessary reforms. He says his mediation has resulted in the creation of the Office of the Special Prosecutor, which is responsible for investigating the contents of the wiretapped materials, and also helped achieve some progress concerning the electoral process. But, Vanhoutte said, apart from that "in all other areas mentioned, no progress has been made." 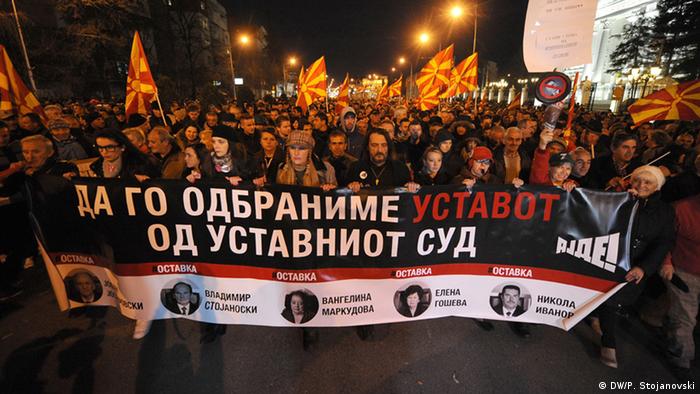 On March 15, Macedonians protested a legal change that would give the president broad pardoning powers

Vanhoutte, a 60-year-old diplomat who spent part of his career working as an international mediator for the UN, said he was concerned by the ruling party's total control of all segments of society.

"The system of control established by VMRO-DPMNE is reaching to all corners of society and doesn't allow any free and critical thinking, let alone any suggestion to readjust course to a more democratic one," Vanhoutte said. "The resulting climate is one of general fear. People are afraid to be fired or to end up in prison."

Led by Nikola Gruevski, the VMRO-DPMNE came to power in 2006, promising integration into the European Union and NATO and a focus on the economy in a country where the unemployment rate has approached 30 percent. Gruevski resigned in January under pressure from EU and US diplomats, but his party still controls the government and is considered favorite to win the early elections planned for June 5.

"Macedonia is clearly not ready for elections," Vanhoutte said. "At this stage, elections will not solve anything, but only further deepen the current crisis".

Last week a leaked report from Macedonia's State Electoral Commission showed that almost 300,000 names out of 1.8 million on the voter registry might be fake. The opposition has argued for years that VMRO-DPMNE is rigging the elections. Vanhoutte said plenty of other problems persist in addition to those with the voter registry.
"Lack of media freedom and absence of any balanced political reporting is one of the main reasons why elections are not a good idea now," Vanhoutte said. "In addition, the absence of any separation of party and state makes it impossible to organize free and fair elections with a level playing field for all parties."

Vanhoutte was also critical of what he called the "lack of decisiveness of the international community."

"It is nearly impossible for the local citizens to bring the society back to normal," Vanhoutte said. "Regime change by elections is not an option anymore. International support is the only alternative, and action is urgently needed. Such action should result in the creation of an ad hoc technical government for at least two to three years - time necessary to solve the many problems with its financial management, the judiciary, education and media the country is facing."

Over the past few months, Vanhoutte was regularly targeted by pro-government media and by the ruling party, which declared him persona non grata because of his outspoken critique of the government. But, instead of arguing, he started tweeting cat memes accompanied by entertaining comments.

Vanhoutte's tweets became an instant hit on the social networks and received broad public support. He said the posts were aimed at balancing "the ongoing debate between a powerful governmental coalition and relatively weak opposition parties."

Although he is leaving his post as an EU mediator, Vanhoutte said he planned to come back in Macedonia at the beginning of April - but this time as a private person on his own initiative in order to help civil society.