Protesters hit Macedonia′s capital with paint balls and soap suds in a ′Colorful Revolution′ | Europe | News and current affairs from around the continent | DW | 20.04.2016

Wednesday marks day nine of what Macedonian protesters have started calling the "Colorful Revolution." Skopje is awash in paint and fountains are filled with soap bubbles in protest against government corruption. 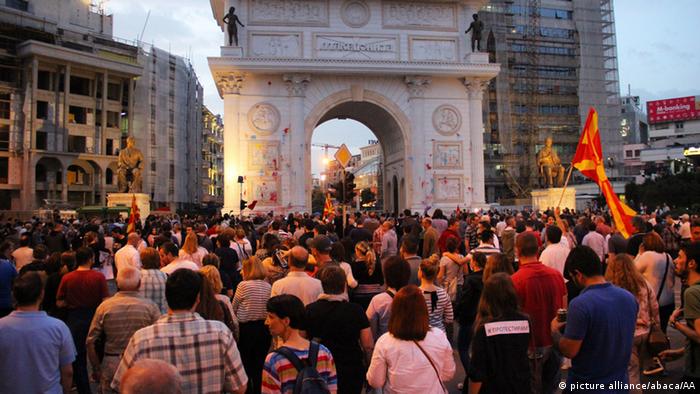 Throughout Skopje, the capital of the Former Yugoslav Republic of Macedonia, protesters are pelting monuments with paintballs.

The city of a half-million people has seen thousands participate in nightly protests ever since the country's president pardoned dozens of high-ranking politicians last week who had been implicated in a wiretapping affair.

In protesters' eyes, the president's pardon is yet another signal that their government is corrupt at worst and incompetent at best. The city's brand-new monuments have come to symbolize both.

The structures are just one part of the "Skopje 14" renewal project, which began in 2010 as a plan to build a few dozen monuments, sculptures and buildings. Since then it has ballooned in ambition and price.

The most exorbitant result is a 22-meter-high (72-foot) statue of the country's most famous son, Alexander the Great, his horse reared gallantly atop a white marble column.

The cost of the monument was estimated at 10 million euros ($11 million), but a general lack of transparency has plagued the entire project. With one in four Macedonians unemployed, the spending comes at a bad time.

And so on Monday, protesters filled the fountain below with laundry detergent.

Early the next morning, they dumped some red paint in the water as well. The liquid became a symbol of the "blood" shed by the people in their collective fight for good governance. The waters were soon drained and returned to normal, but some of the lions flanking the fountain still have their eyeballs and testicles painted red.

The "Colorful Revolution" is rather diffuse, with no clear leader and no clear political platform. In that sense it resembles the Democracy Spring movement in the US, France's #Nuitdebout protests or the 15-M movement in Spain.

Protesters are mostly young and unemployed - a kind of common theme in Europe. They're frustrated with the political establishment, corruption and their own uncertain employment opportunities. Like in other European protest movements, the participants in Skopje's "Colorful Revolution" are using social media to connect with each other and to draw attention to what's going on in the capital.

"Protest," a Macedonian-language Facebook action page, is helping to organize the anti-government demonstrations throughout the country. Its demands are clear: First among them is to revoke the blanket pardon made by President George Ivanov. Second is Ivanov's irrevocable resignation. And parliamentary elections, which are scheduled for June 5, are to be delayed.

These demands - and many of the posts on Twitter and other social media outlets - are written in English, in addition to Macedonian. The intent seems to be to internationalize the message and make the movement accessible to people outside the country and thereby increase awareness for their protests.

Hristina Efinska, a 28-year-old protester who works at a duty free shop at the Skopje airport, told DW that she views the protests as a form of art.

"A lot of money was given for [the monuments], money that we could have used for a smarter purpose. So people are very angry with these 'monuments,' and coloring them means expressing their revolt by 'making them pretty' and 'making them real art'."

Not all Macedonians support the protesters, and some are frustrated by the acts of spraypainted vandalism on the city's brand-new monuments. One common conspiracy theory on Twitter was that the protests were a US attempt to overthrow the government - perhaps funded by former financier George Soros.

Demonstrations are set to go on, though, with the next protest scheduled for Wednesday evening. As in previous events, supporters are using social media to spread the word.

The protest can be expected to continue, at the very least, through Friday.

That's the date when members of the government will convene in Vienna, together with the EU, for a crisis meeting.

Protesters are demanding a seat at that table but have yet to receive a reply.

Thousands of people have protested in the Macedonian capital for a fourth night against the president's decision to grant pardons in a wiretapping scandal. The political crisis is deepening in the volatile Balkan state. (15.04.2016)

"Young, dynamic, hopeless?" That is the name of this year's Pentecost drive by the Catholic charity Renovabis. It seeks to draw attention to the lack of perspectives for young people in southern and eastern Europe. (17.04.2016)