The 24-year-old could be charged with attempted murder over the 14 people injured in the attack. He reportedly overstayed a tourist visa in 2017 and does not have a French criminal record. 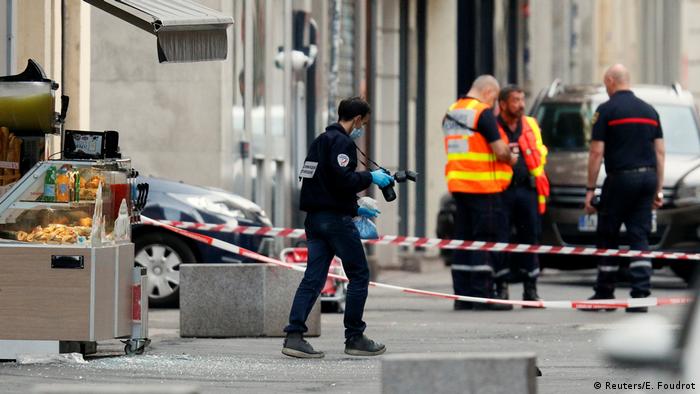 France's counter-terrorism prosecutor Remy Heitz said on Friday that the main suspect in last week's bombing in Lyon had pledged loyalty to "Islamic State" (IS) extremists. French media has since reported that the suspect, identified only as Mohamed Hichem M., was an Algerian who had overstayed a tourist visa in 2017 and was unknown to police before this incident.

Heitz said that the man had admitted to "pledging allegiance to the IS deep down inside and dropping off the explosive device he had prepared beforehand."

Investigators have said that they have proof the suspect ordered a pack of 20 batteries corresponding to the remote used to trigger the device.

Fourteen people were injured in the explosion outside a bakery in the central French city.

Mohamed Hichem M. was arrested on Monday. Heitz has said there is surveillance footage that shows the suspect heading toward the center of Lyon on a bicycle, then leaving a paper bag in the middle of the pedestrian-only street. He then returned to his bike and sped away, with the explosion occurring about one minute later.

The suspect's parents and brother were also detained for questioning but later released after police determined there was no evidence they were involved in the crime.

The 24-year-old could be charged with attempted murder, criminal terrorist conspiracy, and manufacturing an explosive device with terrorist intent.

The French justice minister has alleged the female partner of an Islamist prisoner smuggled in a ceramic knife for a terror attack. Two guards were stabbed. The prisoner's partner was reportedly shot and later died. (06.03.2019)