LuxLeaks whistleblowers go back to court in Luxembourg | Europe | News and current affairs from around the continent | DW | 11.12.2016

LuxLeaks whistleblowers go back to court in Luxembourg

The PricewaterhouseCoopers workers who exposed dirty tax deals are appealing their convictions. They had passed more than 30,000 documents on to the investigative journalist Edouard Perrin. 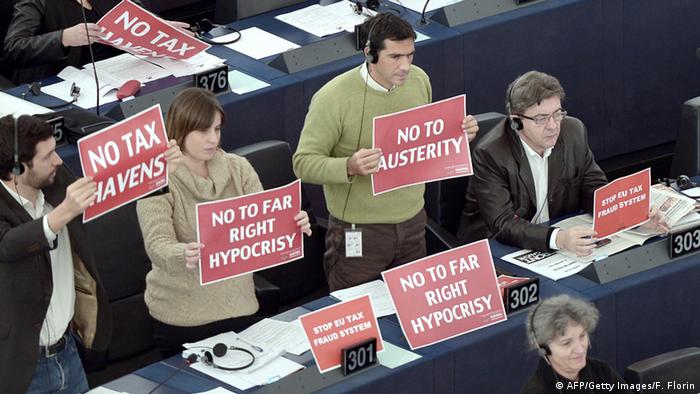 Luxembourg is bracing for demonstrations on Monday, with many protesters expected to come from France to show support for Antoine Deltour, Raphael Halet and Edouard Perrin, who are returning to court for exposing deals that helped multinational corporations pay massively reduced taxes. Deltour and Halet, former employees of PricewaterhouseCoopers (PwC), passed on more than 30,000 documents to Perrin, an investigative journalist, for the 2014 revelations that became known as the Luxembourg Leaks, commonly referred to as LuxLeaks.

The LuxLeaks revelations were explosive. They showed how more than 300 international corporations minimized their tax rates by secretly negotiating tax rulings set up by PwC - with at least one company successfully securing an effective tax rate of less than 1 percent for 2010. Though Deltour and Halet were convicted and Perrin is headed back to court for another round, companies such as Pepsi, IKEA, the energy provider E.On, Apple and Heinz have not yet been charged with any offenses.

These companies have used crafty methods to channel their revenues through Luxembourg, bypassing other European countries and depriving them of billions in tax revenues. Anja Osterhaus, a political scientist who works with the NGO Transparency International, is outraged. "Actually, those who made tax avoidance possible should be standing trial: the corporations and the politicians," Osterhaus told DW. She demands at least a minimum of protection in Europe for whistleblowers such as Deltour and Halet. "You cannot leave it to individual states to decide whether they want protect whistleblowers or not," she said. 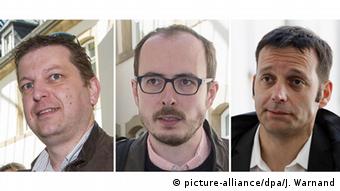 From left to right: Halet, Deltour and Perrin

In the first trial, the court acknowledged the fact that Deltour and Halet had acted as whistleblowers and recognized the general public interest in their actions. Nonetheless, Deltour and Halet left the trial with a criminal record. More than 200,000 people have signed a petition in support of Deltour, and activists have collected money for his legal fees.

Sven Giegold, a member of the European Parliament from Germany's Greens who specializes in fiscal politics, testified at the first trial. He pointed out to DW that the deals struck in Luxembourg have been declared illegal under European State Aid Law. Furthermore, the nation did not report these tax deals to the financial authorities affected by them even though it has been obligated to do so since 1977. "The whistleblowers laid bare illegal conduct," Giegold said. "It is even more scandalous that they are being persecuted by the Luxembourg legal system."

Members of the European Parliament are especially concerned about the effort to put Perrin back on trial. Giegold finds it perfectly normal for journalists to deal with secrets in their work. "If journalists get into trouble for betraying secrets," he said, "then things do not look good for press freedom."

But the Grand Duchy did not change its business practices. Just before the trial began, the Brussels-based NGO Eurodad published a report on the dramatic rise of secret tax deals in the EU. In Luxembourg, the number of secret tax notes rose from 346 at the end of 2014 to 519 at the end of 2015 - an increase of over 50 percent.

According to Eurodad, the Netherlands and Belgium top the list of EU countries that offer corporations generous tax cuts. Each of those countries has at least 16 laws that companies can use to dodge taxes. The EU average is about 11 such laws per state. In Germany, there are eight laws in this category. According to the European Commission, member states are losing 50-60 billion euros in annual revenue to the corporations' active avoidance of taxes.

At the very least, LuxLeaks has stimulated the debate on transparency and fair taxation in the European Union. In June, the EU states agreed to a directive that would make it more difficult for corporations to relocate where they report their revenue. And, in the future, national tax authorities must inform their EU counterparts about such tax deals.