Both the Spanish and English-language versions of the Puerto Rican artist's song have been dominating airwaves. Music streaming has helped the reggaeton hit gain worldwide popularity beyond its Latin roots. 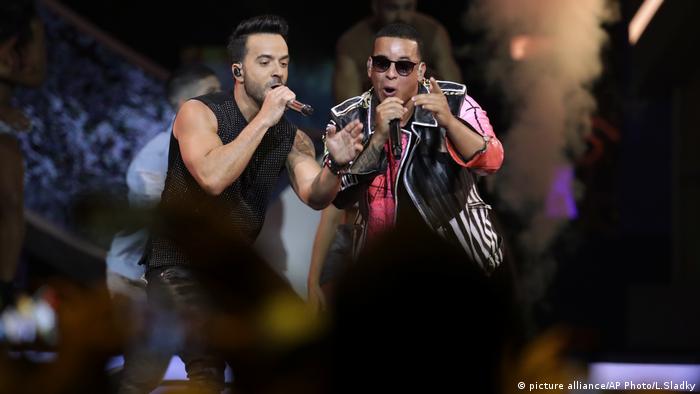 Though the song title means "slowly" in Spanish, the rise of "Despacito" has been anything but sluggish.

On Wednesday, the Universal Music Latin Entertainment label, which brought the reggaeton song by Puerto Rican musicians Luis Fonsi and Daddy Yankee (above, left and right) to the airwaves in January 2017, announced that "Despacito" had earned the status of most-streamed song of all time.

The Spanish-language January original, with its heavy, hip-swinging beat and sexually-laden lyrics, went viral shortly after its release at the beginning of this year, and an April remix of the song featuring Canadian popstar Justin Bieber helped push "Despacito" to its current record 4.6 billion streams, Universal Music said.

In the process, "Despacito" dethroned Biber's 2015 hit song "Sorry," which, according to the Latin music label, had held the top spot until now with 4.38 billion streams.

On YouTube alone, the Spanish-language original of "Despacito" has garnered over 2.6 billion views, while the English remix has earned over 4.2 million views. The remix hit has remained in the number one spot on the Billboard Hot 100 for 10 consecutive weeks and continues to top the play rankings for Radio Songs, Hot Latin Songs and Latin Airplay.

Watch: The most-streamed songs on Spotify in 2016

From Puerto Rico to the world

"Despacito's" success has crossed linguistic and cultural boundaries in its rise to the top of the music charts.

Reggaeton, which originated in Puerto Rico in the late 1990's, blends hip hop, rap, and musical influences from Latin America and the Caribbean, particularly Jamaica. Latin American youth culture is a major theme of the genre that fills dance halls and parties, and reggaeton lyrics are often highly explicit.

Originally an underground music form, Reggaeton gave a voice to black Puerto Ricans and was rejected by the US musical establishment in the early 2000s when it began to be embraced by a young Latino generation in the United States.

"Streaming has opened up the possibility of a song with a different beat, from a different culture and in a different language to become a juggernaut of success around the world," Grainge said.

"Despacito" artist Fonsi added that, "Streaming is a connector for audiences worldwide and it has helped my music reach every corner of the planet. It is truly an honor that ‘Despacito' is now the most streamed song in history."

The most-streamed songs on Spotify in 2016