Lufthansa pilots to strike when DB trains back on track

The Lufthansa pilots' union will strike on October 20 and 21. The action comes just in time: The German train drivers' union has promised no stoppages for seven days when its current strike ends at 4 a.m. Monday.

On Sunday, the Lufthansa pilots' union, Cockpit, announced that its next strike would last from 1 p.m. (1100 UTC) Monday until 11:59 p.m. on Tuesday. The pilots have found themselves locked in dispute with Lufthansa's management over retirement benefits.

"The goal of the strike is a new collective agreement for all employees of the cockpit crew," the union announced Sunday on its website, adding that members regret "the inconvenience to passengers."

The strike will affect flights nationwide. Last week, the union kept planes for Lufthansa's budget carrier Germanwings grounded. Talks between the airline and the union broke down in September.

On Sunday, the German train drivers' union, GDL, announced that it would launch no further strikes for at least seven days. The union's current stoppage, set to end at 4 a.m. on Monday, has brought to a halt about two-thirds of long-distance trains operated by Deutsche Bahn (DB), Germany's main means of mass transportation and the carrier of millions of people daily. 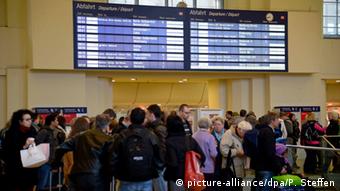 "I think we'll speak over the next week and during that we'll take a break of at least seven days," GDL head Claus Weselsky told public broadcaster ZDF Saturday. On the topic of whether it was right for the GDL to launch a strike on a weekend that regularly sees Germans crisscrossing the land to begin or end the autumn school vacations, Weselsky said that on national rails "it's always peak season - seven days a week." He added that the union merely awaited a "negotiable offer."

In addition to shutting down most long-distance trains, the strike has also affected urban and regional services and rail freight traffic. Drivers also launched an overnight strike on Thursday and a nine-hour strike on October 7.