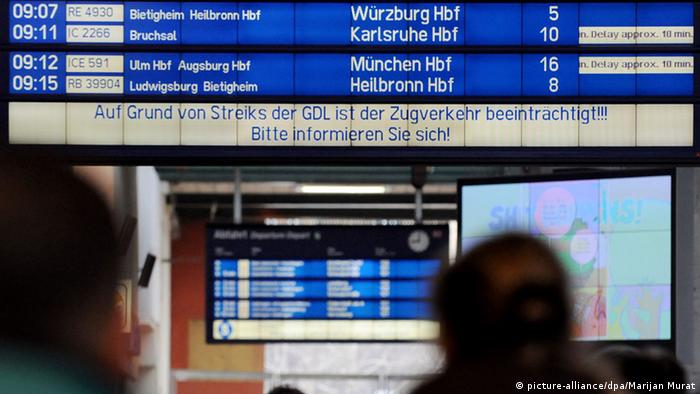 GDL said the strike call was primarily for its members, but other rail staff such as train attendants and service personnel were also called upon to join the walkout.

According to the union, the strike is in support of a demand for 5 percent higher wages and a reduction in working hours from 39 to 37 hours a week. In addition, GDL seeks the right to hold collective bargaining negotiations for rail workers who are represented by rival unions.

German state-owned rail operator Deutsche Bahn (DB) said it had "no understanding whatsoever" for the new walkout, and called on GDL to return to the negotiating table. In a statement, DB said the union's claim that the rail operator was not interested in discussing their demands was "brazen."

At the moment, Berlin is drafting a bill ensuring that only the strongest labor union with the most members in a company is allowed to conduct wage negotiations. The draft is intended to limit the powers of unions representing only certain professions like train drivers or pilots.

"DB is really expecting us to keep silent until the new law bans us," Weselsky said, adding that the union would intensify its strike actions until all rail workers got a new deal.

Pilots to join in the chaos

Pilots working for Lufthansa's budget offshoot Germanwings have announced they'll go on a 12-hour strike Thursday starting at midday to protest plans by the German airline to curb their retirement benefits.

Pilots said they wanted to keep intact the old regulations whereby they could retire at 55 and continue to receive part of their salaries. Lufthansa wants them to retire at 60 at the earliest.

More than 4,300 flights have been canceled by strikes in Germany since April, affecting some 500,000 passengers.

Passengers have faced delays on German rail services as train drivers widened a series of strikes in a long-running dispute. At the same time, freight pilots with the country's national carrier are staging walkouts. (08.10.2014)