Just under half of Iraq's voting population cast a ballot to choose 329 parliamentarians. Higher turnout was observed in areas that were freed from "Islamic State" occupation. 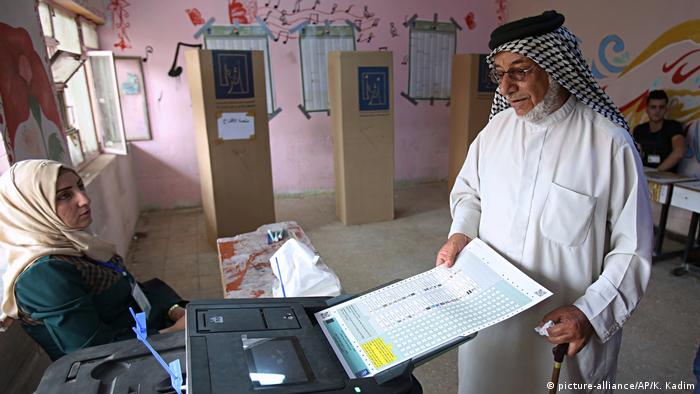 Polls closed on Saturday in Iraq's first parliamentary elections since the country declared victory over the "Islamic State" (IS) insurgency.

The election is the fourth since the fall of dictator Sadam Hussein. The vote was held amid public concerns over corruption and pressure on politicians to improve services and revitalize the economy in the oil-producing country.

​​​​​​PM Abadi vying for second term: Prime Minister Abadi is seeking to extend his tenure and hoping that the defeat of the IS insurgency can give him a boost. The British-educated engineer came to power four years ago, when the militant group held a third of the country's territory.

"Iraq is strong and unified after defeating terror," Abadi said after casting his vote on Saturday. But now that the military campaign is over, Abadi is vulnerable to political challenges from other Shi'ite leaders.

Read more: The Iraq War: In the beginning was the lie

Who are the other candidates?

Among the contenders vying for Abadi's job is Hadi al-Amiri, the leader of the main Shi'ite paramilitary group, who spent more than two decades fighting Saddam from exile in Iran. Amiri has close ties to Iran and his organization has been accused of abuse of Sunni Muslims in Iraq. But his supporters stress his important role in the defeat of IS.

Nuri al-Maliki, who was Prime Minister of Iraq from 2006 until 2014, is another prominent contender. Maliki had to step down after IS made significant territorial gains in the country. The former prime minister is positioning himself as a champion of Shi'ites and hoping for a political comeback.

Stuck between Iran and the US: Saturday's parliamentary elections were marred by tensions following the US withdrawal from the landmark 2015 Iran Deal. Iraq is allied with both the US and Iran, but a new confrontation between both countries could prove destabilizing for Iraq, as Shi'ite groups seek to pull the country closer to Iran.

Votes being counted:  Official results of the parliamentary elections will be announced on Sunday or Monday. Iraq used an electronic voting system for the first time, in hopes of mitigating concerns of election fraud. Some local media reported balloting delays at several polling stations, due to issues with the electronic devices.

Opinion: Will victory against 'IS' bring peace to Mosul?

The coalition's defeat of the so-called "Islamic State" in Mosul has shown it can wage war. Can it now wage peace? It won't be easy, writes Matthias von Hein. (10.07.2017)