Charges have been dropped against seven accused at Germany's mammoth negligence trial. Three 2010 techno rave organizers remain after rejecting fines. Relatives of the 21 killed still insist on a full probe. 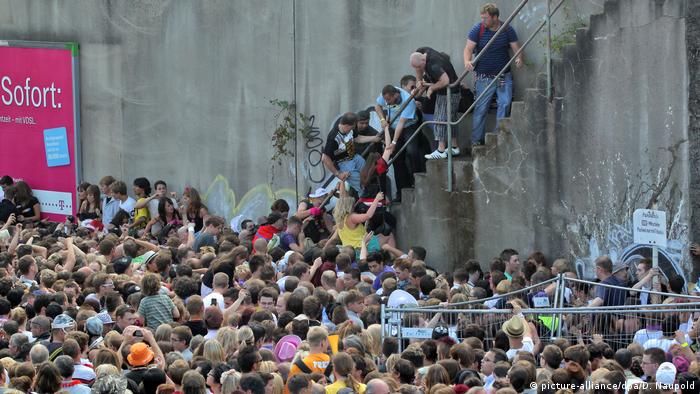 Presiding judge Mario Plein said Wednesday that "many persons" were collectively to blame for the 21 young people killed in a mass panic at Duisburg eight years ago but he argued that 14 months of proceedings had still not established individual guilt under German law.

Wednesday's dropping of charges against the accused — six Duisburg city officials and one event organizer — had been  expected since the court foreshadowed the move mid-January at special talks between defense lawyers, prosecutors and advocates for victims and relatives.

Three choose to remain on trial

Three Love Parade organizers who worked for the Berlin-based firm Lopavent elected Wednesday to remain on trial – seeking to clear their names – after rejecting fines of 10,000 euros ($11,400) offered by prosecutors.

Jürgen Widera, a Duisburg Protestant pastor who chairs a trust for victims, said many parents wanted the judiciary to continue examining "further mosaic stones" so as to established the causes of the crush that also left 652 injured, some traumatized.

"Naturally, we will now intensively pursue our obligation to investigate," said Justice Plein while denying that the judiciary had overlooked culprits during the trial - held for space reasons in a Düsseldorf conference center - by Duisburg's Regional Court since December 2017, involving so far 59 witnesses and 8 experts.

"Many persons are to blame," Plein said, adding that the court already saw mistakes in planning the event and a collective failure on the festival day, 24 July 2010. Trial termination for the seven was, however, "right," said Plein, saying their individual guilt was minimal or at most moderate.

Klaus-Peter Mogendorf, who lost his son, Eike, in the mass tragedy, demanded Wednesday that "this trial not be terminated" and urged the court at its Wednesday session to continue its probe, saying that in 2010 it was "glass-clear" that there had been culprits.

In July 2010, techno music fans were funneled through a single egress - a large disused two-lane vehicle tunnel – onto former rail yards at Duisburg, a Rhine river city in western Germany.

The 62-year-old civil engineer accused the court Wednesday of citing from an expert report it commissioned only selectively and not hearing important witnesses.

Organizers had known that the rail yard access should be been widened via earthworks and that a required public address system to inform pedestrians had been omitted, said Mogendorf.

Duisburg's Social Democrat (SPD) mayor Sören Link, who was elected after the disaster, said he understood the disappointment of survivors and relatives of those killed after 101 days of trial proceedings.

"The trial days up to now have shown how difficult the search for causal, individual guilt is – and this is what [German] criminal law is about," said Link.

Prosecutors had argued that a statute of limitation – effective tens years after the disaster – would force a trial closure by 28 July 2010.

Justice Plein told Mogendorf Wednesday that the statute of limitation "does not matter," adding that the court continued to work on the basis of establishing sufficient suspicion.

The charges against my client have not been established. The planning errors did not lie with the [public] site supervision," said Kapteina.

The 2009 collapse of Cologne's archive killed two people, destroyed innumerable historical documents and caused millions in damage. Over nine years later, a court found that the builders were largely not to blame. (12.10.2018)