The former Duisburg mayor has denied any involvement in planning the 2010 Love Parade festival, in which 21 people were killed during a stampede. The ex-mayor is not among the six city officials facing criminal charges. 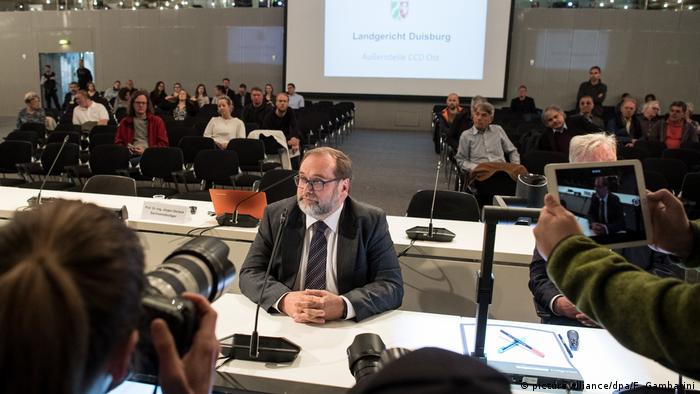 Adolf Sauerland, former mayor of the German city of Duisburg, told a court on Wednesday that he bore no responsibility for the planning errors that saw 21 people crushed to death at the Love Parade music festival during his time in office in 2010.

Testifying as witness before a court in Dusseldorf, Sauerland said he was "not active in the approval process," and that he "did not have to issue or prepare any permit" in the lead up to the techno festival.

Sauerland appeared as witness in a criminal case brought against six Duisburg city employees and four festivals organizers, in what is set to be one of Germany's largest ever trials. Sauerland, however, faces no charges.

Twenty-one people were crushed to death and a further 652 were injured at the Love Parade in Duisburg in 2010, after hundreds of thousands of festival-goers hit a bottleneck at one of the tunnels leading to the festival grounds.

Sauerland refused to take any political responsibility for the accident and was accused of showing a lack of empathy to the victim's families. He was subsequently voted out of office by referendum in 2012.

Chief presiding judge Mario Plein expressed his dismay that Sauerland, as Duisburg's sitting mayor, could have had so little knowledge of the planning ahead the event. "We are not talking about the Flea market in Duisburg-Marxloh," Plein said, referring to an area on the eastern side of the city. "We're talking about the Love Parade. This is what's difficult to understand."

Previous editions of the Love Parade had seen more than a million party-goers take to the streets in Berlin, Essen and Dortmund. Similar numbers were expected to travel to Duisburg for the 2010 festival.

The former mayor responded by saying that "ultimately, the question was whether the event was eligible for approval or not."

Read more: The businessman behind the ill-fated Love Parade

Sauerland admitted that he had initially raised the idea before the city council that Duisburg should apply to host that year's parade, provided that a suitable plot of land could be found. The council approved the measure by a large majority, including Sauerland's own vote.

Once a former freight station grounds was confirmed as the festival's venue, Sauerland said he left the planning to the relevant officials, although his spokesman did take part in some of the Love Parade planning meetings.

Sauerland also told the court that Duisburg's police chief at the time had warned that hosting such a large-scale music event was unfeasible in a city of Duisburg's size and structure. Sauerland said he had asked city officials to evaluate those warnings and at the time had assumed that this had been done. However, he admitted that he had no knowledge of the city council's findings, or if a probe was ever undertaken.

The trial is set to be one of Germany's largest in the post-war period. Seventy lawyers – 32 representing defendants and 38 representing 65 joint plaintiffs, mainly relatives of those killed — were in the courtroom on Wednesday to hear Sauerland's testimony.

The number of lawyers and plaintiffs involved saw the case moved from the regional court in Duisburg to a 500-capacity convention hall in Dusseldorf.