The businessman behind the ill-fated Love Parade | Business | Economy and finance news from a German perspective | DW | 26.07.2010

The businessman behind the ill-fated Love Parade

The organizer of the ill-fated Love Parade, German fitness czar Rainer Schaller, has a reputation for swimming against the current and making risks pay off. Now the entrepreneur has become the obejct of public scrutiny. 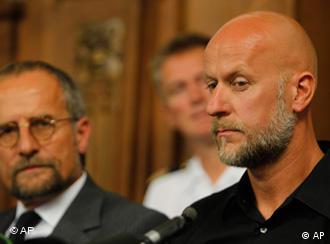 After a mass panic killed 19 people at the Love Parade techno music festival in Duisburg on Saturday, one of Germany's less conventional entrepreneurs has found himself in the public spotlight. Rainer Schaller, who took over Love Parade in 2006, owns a successful chain of fitness studios.

McFit, as Schaller's chain is called, boasts prices as low as 16,90 euros per month. It has 118 throughout Germany, some 900,000 members, and a turnover of 134 million euros. Love Parade was intended to serve as a marketing tool for the company, which plans to expand across Europe.

41-year-old Schaller's success can in part be explained by his willingness to take risks.

According to the Handelsblatt daily newspaper, Schaller's first fitness studio was an illegal operation which he kept amongst friends and operated in an attic above his parents' supermarket outside of Nuremberg. He comes from a family of grocers who taught him the "mathematics and accounting" of running a business. 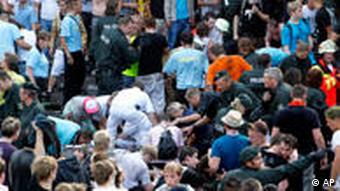 When Schaller opened the first McFit in Wurzburg in 1997, he did every job in the new business himself, from cleaning to training and administration tasks. He advertised the new McFit studio as being "now also in Wurzburg," giving the impression that it was part of a large, successful chain.

Unlike most fitness chains in Germany, McFit's strategy is to offer a barebones gym with limited classes and training staff and no extra amenities such as saunas. Customers have around-the-clock access to the machines, but showers cost 50 cents extra.

The concept proved popular, and Schaller opened his second studio in 1998.

In 2008, the chain recruited Ukrainian celebrity boxers Vladimir und Vitali Klitschko to represent it, and in 2009 it opened its first studios in Austria and Spain.

In 2009, he told the Handelsblatt newspaper that McFit's interest in Love Parade was to "use a relatively small budget to gain a high recognition factor. We spent a lot of time thinking about what kind of crazy thing we could do to make ourselves more well-known. We chose Love Parade."

Schaller expressed his condolences at a press conference Sunday, reading from a text and visibly upset. 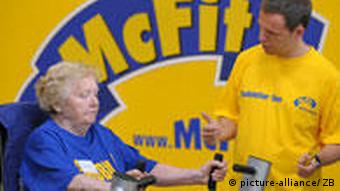 McFit was the main sponsor of the ill-fated Love Parade

"The Love Parade was always a peaceful and joyous party that will now forever be overshadowed by yesterday's tragic events. Out of respect for the victims, families and friends, we will discontinue the event. The Love Parade is no more. Words are not enough to describe the extent of the shock I feel," he said.

Love Parade was founded in 1989 by Berlin DJ Matthias Roeingh, also known as Dr Motte. In some years it drew more than a million visitors, but planning and financing issues caused it to be cancelled in 2004 and 2005.

The event was revived and relocated to the Ruhr region in 2006 by Lopavent, a Schaller-owned company. McFit has sponsored it with 3 million euros per year ever since.

After mass panic broke out at Saturday's Love Parade music event and killed 19 visitors, state prosecutors have opened up an investigation of possible negligent manslaughter in the planning of the event. (26.07.2010)

German state prosecutors have opened an investigation into the stampede that killed 19 people and injured hundreds at the Love Parade music festival in Duisburg. But questions remain as to what caused the tragedy. (25.07.2010)

Berlin to Feel the Love Once Again as Parade Returns

Concerns that the Germans would experience a massive depression after the World Cup ends on July 9 have been allayed thanks to news that the world famous Love Parade will be back this year after a two-year absence. (23.02.2006)

Recriminations begin to fly over how 19 people were killed at a dance music festival in the German city of Duisburg (25.07.2010)

An investigation is launched into the disaster at the Love Parade in Germany (26.07.2010)