More Than One Million Dance at Annual Love Parade

More than 1.2 million ravers danced to powerfully amplified techno music blaring from 37 floats on a main highway in the western German city of Dortmund on Saturday at the annual Love Parade. 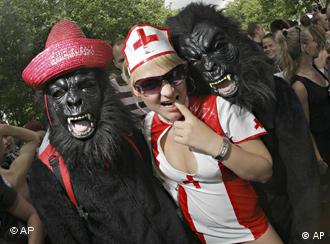 Some ravers were scantily clad; others went for fur suits

Once famous as a summer institution in Berlin, the techno parade hit the western city of Dortmund on Saturday, July 19 and proved it had not lost its popularity with the change of venue.

More than 1.2 million flocked to a roughly one-mile long main road which had been closed to allow the scantily dressed mostly young people to shake to techno music blasted from 37 floats.

Some 250 DJs are taking part in the event, which is expected to last until midnight Saturday.

Driven by electronic dance music, the spectacle has gained a reputation over the past two decades for loudness, outlandish garb, marathon dancing, and, by some accounts, widespread use of the drug ecstasy.

Organizers said 15 of the bands came from abroad, including from Australia, South Korea, Ukraine and Turkey. Each band occupied a float. The amplifiers required cooling to stop them overheating. 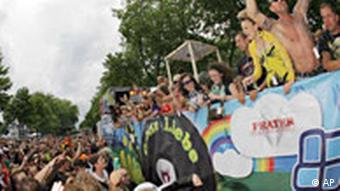 Pump up the volume - ravers give it their all

"It's a wow," giggled Austrian raver Doris, 33, in a purple wig, giant sun-glasses and a very small dress as she gyrated past, taking yet another swig from her can of beer in the bright sunshine.

Michel, 21, from the south-east of Germany, was just as gushing as he described how he and his girlfriend had arrived in Dortmund on the eve of the parade with nowhere to stay and had danced much of the night in a club.

"We made new friends who let us sleep (with 10 others) in a two-bed room at a bed-and-breakfast hotel. Real nice people," he said.

The parade was being held in the west of Germany for a second year after leaving Berlin, where the annual spectacle began in 1989.

Organizers predicted a turnout of 1.2 million at the event on a section of national highway which was closed to traffic by city authorities and gave this year's parade its motto, "Highway to Love."

DJ WestBam, first up of 250 disc jockeys mixing the music, opened the event with his new Highway to Love "hymn."

Promoters said the parade could be seen live by satellite broadcast in 53 nations of the world. The event was to continue all night in city clubs and other dance venues in Dortmund, a big industrial city in Germany's Ruhrgebiet metropolitan sprawl.

DJ Moby Says Love Parade Made Germany Cool in the US

US musician Moby said the famed German "Love Parade" has made Germans sexy in the eyes of Americans. Surprise, surprise: Grooving, bare-breasted women at the festival are appealing, he said. (06.04.2008)