Love and hate collide in UK counties over Brexit | Europe | News and current affairs from around the continent | DW | 13.06.2016

Love and hate collide in UK counties over Brexit

Love or hate the European Union? In Wales and Greater London the views on the upcoming referendum couldn’t be more extreme. Maximiliane Koschyk visited both ends of the spectrum, in Aberystwyth and in Romford. 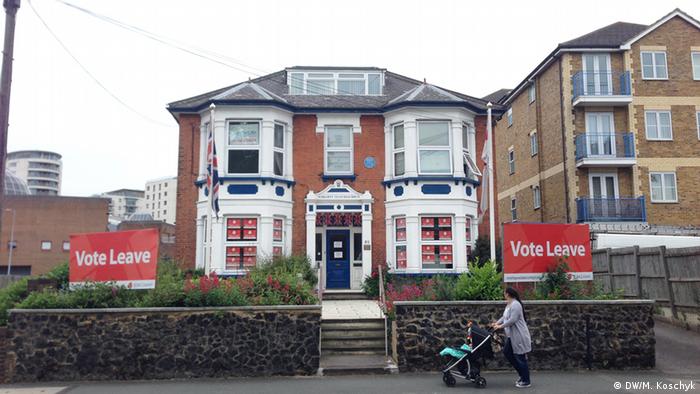 With just 10 days to go until the EU referendum, the question of 'Remain or Leave' looms large over the United Kingdom. But even if many Brits are still undecided, some have already made up their mind - especially in the counties of Ceredigion and Haverings: A recent survey by British pollster YouGov declared Havering in Greater London as the least EU-friendly county in the United Kingdom.

Ceredigion on the other hand was polled as the most EU-friendly county.

The Welsh county may make an odd candidate for EU fandom - that is until you ask locals about their feelings for the British. "In this town you don't say an English person is the same as a Welsh person - that is not acceptable," says Jean Francois-Poncet. He's sitting in a pub at the promenade of Aberystwyth, one of the two larger cities in Ceredigion County. "The Welsh people tend to definitely consider themselves closer to Europe than closer to the English."

No EU, no high-speed internet or infrastructure

With both French and Welsh citizenship, Francois-Poncet considers himself to be truly European. He is one of the 11,000 students who flock to the university each term - almost doubling the population of 15,000 people. Students like him profit from the free movement within the EU and programms such as the Erasmus exchange.

It's early June and term is almost over, but Francois-Poncet is staying in Aberystwyth. He's campaigning for "StrongerIn," the movement that wants the UK to remain in the EU. "We have realized that the EU was investing more in poor areas in Wales than the British government would." High-speed internet, traffic infrastructure, and research grants for the University of Aberystwyth are on the list "If Ceredigion is today as developed as it is, it is partly due to EU funding," he says.

An elderly man in the pub compliments the young campaigner on his pronunciation of ‘Ceredigion.' The Welsh are proud of their language, something the EU was able to bank on. "The Welsh language has always received support from European legislation in terms of protection," says Anwen Elias, an expert on regional politics and the EU at the University of Aberystwyth. The Welsh independent party Plaid Cymru has also played an active part in the 'StrongerIn' campaign in Wales. No wonder, says Elias. "They see the European Union as a way of supporting Wales to become more autonomous," she says.

That doesn't mean Wales would seek to leave the Kingdom and become an independent state. For Welsh politicians the EU vote goes beyond the political party spectrum."It is not a vote about sentiment alone," says local MP and Liberal Democrat Mark Williams. "It is about hardheaded economic realities, that we stand to lose and it will be a tragedy were this country to vote for Brexit."

A matter of economic survival

Wales relies on funds from the EU, as the government in London is not providing any help, according to Williams. "Sometimes we've been overlooked by the UK treasury," he says. Outside of Aberystwyth, the farmers in the Welsh countryside would not survive without the money from Brussels. 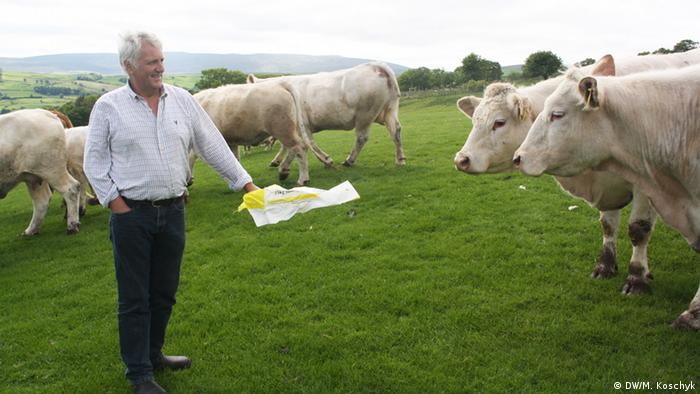 For Farmer Glynn Roberts agriculture subsidies from the EU are sustaining rural life in Wales.

"To be honest, in reality the market doesn't pay enough for our products at the moment," says Glynn Roberts, president of the Welsh Farmers Association. Welsh farmers make around 30,000 euros per year, but almost half the figure comes from EU subsidy payments. "We have to have some kind of financial help, not to sustain agriculture, but to also sustain the rural economy and the rural life."

Leaving the EU would not only mean the end of financial aids, but the loss of a currently protected market for the farmers, says Roberts. Geographic indications, which currently protect French Champagne and Italian Parmesan, would no longer include Welsh lamb. "We will see more of a competition of cheap imports coming into this country at the detriment of our own prime product," he says.

Travel 200 miles west to Haverings county, or "Brexit Central" as the YouGov poll might suggest, and it's a totally different picture. "People are so annoyed these days," says Sue Connelly, the Constituency Secretary of the Conservatives Association in Havering. "Everyone is coming here and they are taking advantage of us." In her mind free movement within the EU is not a gain, but a problem. "We need proper border control,"she says. "We want a managed immigration system like the Australians." 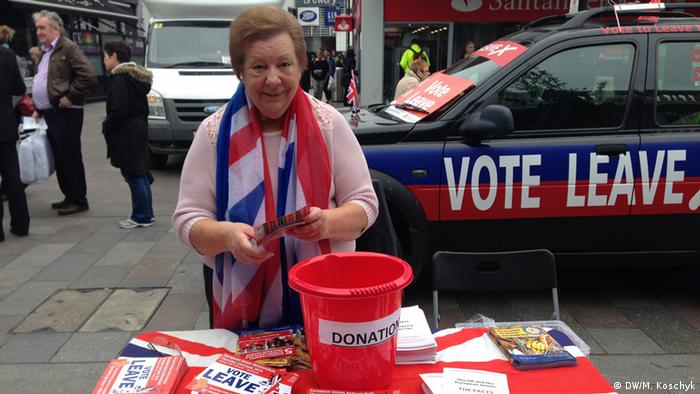 Connelly is preparing for a day of campaigning at the Margaret Thatcher House in Romford. The Conservatives Association headquarters are not hard to miss: Two large "Vote Leave" posters flank the front yard and every inch of the front windows is plastered with campaign signs. Connelly and Andrew Rosindell, the local MP, make their way to the city center in two cars covered in campaign stickers

Pubs are festooned with England flags, the St. Georges Cross, to mark the Euro 2016 football championship now underway in France. "I think the people of Romford are very patriotic," says Rosindell. "No one has ever come to Britain and told us how to run our own affairs."

Another day, another debate 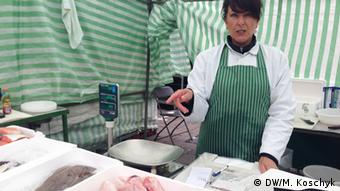 A flag of St. George's Cross also hangs over the stall of Kim Crosbie, a fishmonger at the Romford Market. "I would like to come out," she says about the EU. Crosbie takes issue with the EU Common Fisheries Policy, which settles the quota of how much of the stock can be fished. "Everyone can fish our waters," she says, "but we are only at about 24 percent, and can't do it all of the time."

"I think the mood of the country is swinging toward leaving the EU because people want the British government to make laws rather than impose them on us," says Rosindell.

An elderly man approaches the campaign stand and complains to Rosindell about Irish citizens being allowed to vote in the referendum. "That is a debate for another day," says Rosindell, waving him off.

"Ok," says the man and lets Sue Connelly pin a "Vote Leave" button to his jacket.

With just a couple weeks to go until the EU referendum, Britain's Leave campaign is dominated by in-fighting. Samira Shackle reports from London. (09.06.2016)

UK Prime Minister David Cameron has warned voters against risking the economy and voting in favor of a "little England." In the same televised Q&A, leading euroskeptic Nigel Farage said he thought the EU was "done for." (07.06.2016)

Ten reasons why Britain won't vote to Brexit the EU

For months, the Brits have threatened their fellow EU members with a Brexit that could destabilize the entire European Union. But guess what: That probably won't happen. (28.05.2016)