Ministers in France and Germany's southern state of Bavaria have urged voters to head to polling stations. The calls come despite shutdowns of public spaces amid a rise in COVID-19 cases in both countries. 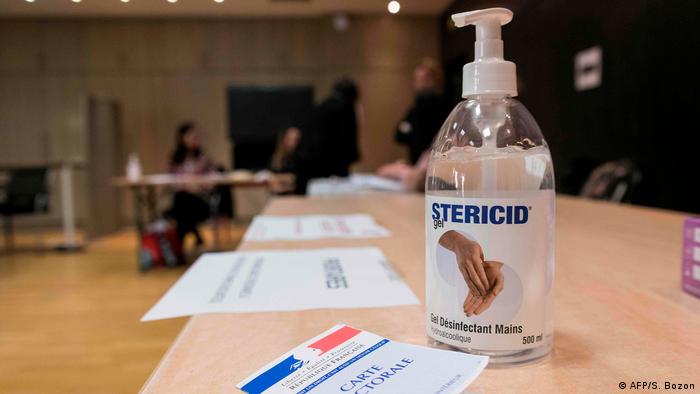 Voters across France and Germany's southern state of Bavaria are heading to the polls on Sunday for local elections despite fears of low turnouts due to the coronavirus outbreak.

On Saturday night, France shut down all unnecessary public spaces including cafes, restaurants, gyms and cinemas, and residents have been ordered to stay at home to curb further spread of COVID-19.

The government has also closed indefinitely all schools, universities, child-care centers, and banned gatherings of more than 100 people, throwing into question the rationale for holding the polls.

But French President Emmanuel Macron insisted that voters turn out to elect mayors and municipal councils to protect local democracy.

"It is important, following the advice of scientists which we have done, to ensure the continuity of our democratic life and that of our institutions," Macron said.

A recent opinion poll showed that 28% of potential voters in France were "concerned" about the risk of infection at polling stations, which are often set up at schools.

France, one of the worst-hit countries by the novel coronavirus in Europe, has over 4,400 confirmed cases and 91 deaths to date.

Officials have ordered stepped-up hygiene measures at polling stations including hand sanitizers and the safe spacing of voters waiting in line.

The two-round local polls are an important mid-term test for Macron. His party dominated Paris during the 2017 presidential elections but he has since lost support over his autocratic leadership style and perceived favoritism of France's rich and elite.

Macron's popularity plummeted further following last month's sex-tape scandal which left the race for Paris mayor in turmoil. His preferred candidate and close ally Benjamin Griveaux dropped out after excerpts of videos and texts he shared with a woman two years ago were shared on social media.

Across France, some 47.7 million people are registered to vote in around 35,000 municipalities. Polling closes at 6 p.m. local time (1700 UTC). The second round of voting is scheduled to take place on March 22.

Meanwhile, municipal elections in the southern German state of Bavaria have begun as planned despite being the second-most affected region in the country by the coronavirus outbreak.

Bavaria counted 681 infections on Saturday — an increase of 123 cases compared to the day before — out of 3,800 confirmed infections across Germany.

German states have also stopped public gatherings of more than 100 people. Schools and kindergartens will also be shut in most states until after the Easter holiday in April.

Approximately ten million people are eligible to take part in 4,000 state-wide polls for some 40,000 mayors and city or municipal councils positions, as well as those at the district and county council level.

Officials say they noted an increase in postal voting this week because the public's interest in participation remains high despite the COVID-19 outbreak.

The local elections are a litmus test for Bavarian parties, following the 2018 state elections and the European elections last year.

"The challenge is immense," Bavarian state premier Markus Soeder told a local news conference, ahead of the vote.

According to polls, Mayor and Social Democrat Dieter Reiter (SPD) has a good chance of re-election in the state capital of Munich, but he may have to take part in a run-off vote on March 29.

The release of a sex tape that ended the mayoral ambitions of a Macron ally has led to the arrest of a Russian artist and his partner. The artist said he shared the images to fight political "hypocrisy." (16.02.2020)

Infamous criminal Gilbert Chikli was named the ringleader of a scheme to steal money from powerful individuals by posing as French Foreign Minister Jean-Yves Le Drian. He called his conviction a "scandal." (11.03.2020)

Agnes Buzyn is President Macron's nominee to become mayor of the French capital. Last week, Benjamin Griveaux abandoned his bid after being embroiled in a sex tape scandal. (17.02.2020)

Al-Shabaab gunmen have taken control of a hotel in the Somali capital, Mogadishu. Several explosions and gunfire were heard outside the building.