Life after lockdown: Virtual events could be here to stay | Business| Economy and finance news from a German perspective | DW | 30.06.2020

Life after lockdown: Virtual events could be here to stay

The coronavirus pandemic caused a halt to large events worldwide, so organizers looked to different ways of continuing business as usual. Their solution? Online gatherings — which could be here to stay. 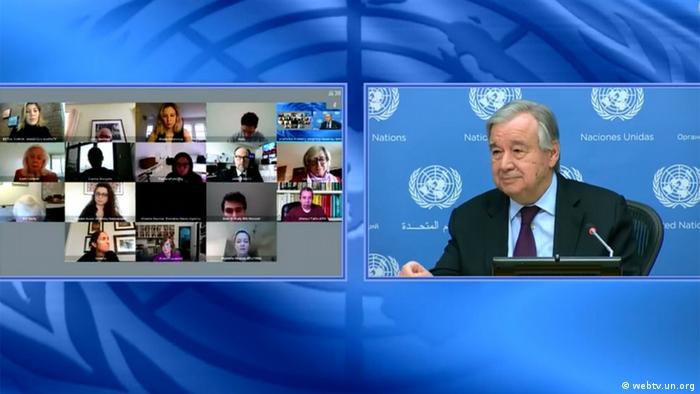 One of the joys of attending conferences pre-COVID were spontaneous meetings, corridor chats, and drinks with like-minded people. This was all but gone after the coronavirus pandemic caused events to be called off and gatherings limited to only a handful of people.

What resulted was a collection of academic and business events turning to online platforms to collaborate, network and share ideas. This wasn't without its challenges, says Diana Raiselis, a German Chancellor Fellow who researches nightlife with Clubcommission Berlin.

"A conference's actual program is only one small part of an event — the post-session side chats, unexpected experiences, and spontaneous run-ins make up the rest," she said. "I think it's a question of depth or breadth," Raiselis added, "there's something about physically being with other people and sharing an experience that creates connection." 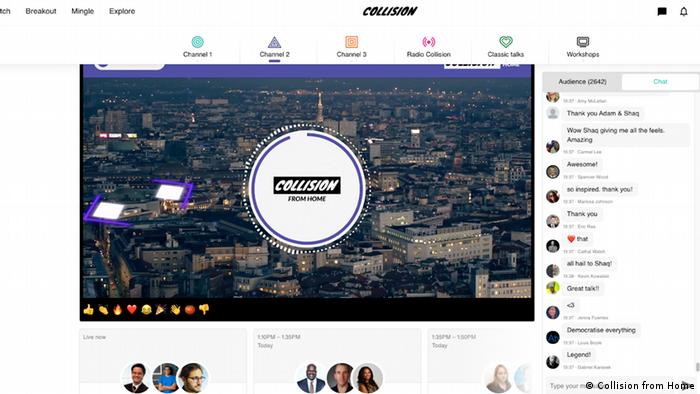 Collision from Home's online platform, which brought thousands of people together

Collision from Home was one such event that went online. The technology conference usually hosted in Toronto, Canada, boasted 32,000 attendees from 140 countries  all logging on to a custom-built online platform.

Attendees logged in for talks from a plethora of big names, flicked between with the click of a button instead of rushing between stages. Despite dedicated "breakout” chatrooms and one-to-one video calls for networking, there was a general impression that people missed the energy of being able to meet others and make contacts in person.

Collision from Home tackled this with a feature introducing attendees to each other for speed dating-style three-minute video calls. In response, one attendee tweeted: "Remote networking may be better than in-person networking after all!"

This sentiment stands strong among the organizers, who wanted to keep networking at the core of the conference experience. Furthermore, they intend to license their platform to other conferences with hopes to revolutionize how events are held.

"The future, I think, is hybrid," Paddy Cosgrave, the CEO and Founder of Web Summit and Collision said, disputing that these events would become online-only.

Technical hitches on the first day caused occasional setbacks; talks were postponed and users reported login issues. "The sheer volume of people logging in essentially caused the system to freeze because it suspected some sort of DDoS [distributed denial of service] attack," Cosgrave said.

Meanwhile, a session with American professional basketball player Langston Galloway was rescheduled after 40 minutes of delays. Attendees took the news in good spirits, expressing patience and support in the chat.

"Trying to resolve that in real-time with huge speed — of course all remotely — was one moment that was quite challenging. We fixed it, but of course, there's lots more to learn in terms of working remotely," Cosgrave said. 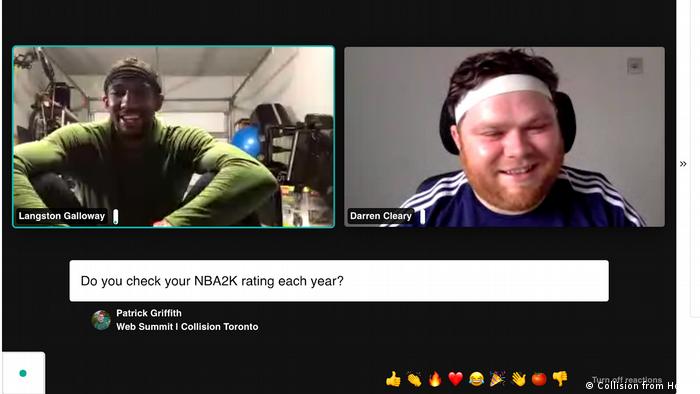 Warm-up session with American professional basketball player Langston Galloway at Collision from Home. Galloway took questions from the audience while leading a workout for participants

A hybrid model for the future

Cosgrave is not the only event organizer who believes in a mixed model going forward. Fernanda Parente, the co-founder of Rosy DX, a studio for digital transformation, says online conferences require "an extra layer of planning" as organizers consider the audience's role.

Parente's previous experience lies not only as a co-curator and moderator of events but also as an audience member. "The current pandemic is a steep learning curve for the events industry and I hope this will motivate organizers to keep creating new formats.”

"Networking is a major part of conferences and it's hard to allow for serendipity in online events, encounters need to be somehow scripted," she added.

While networking events outside of offline conference schedules make for opportunities to meet a wide variety of people, they also have one key disadvantage against online conferences—diversity of participation.

Upon reflection of an annual meeting that took place over the internet, Diana Raiselis noted the benefits of online models, "I recognize that a virtual format absolutely makes wider, and more climate-responsible, participation possible." Getting together for our mental well-being — and the planet

There are also psychological benefits to meeting in person. "Humans need interaction with peers to improve their development," said Dr. Jonas Carvalho e Silva, a specialist in clinical Psychology and Culture, adding "it's important to encourage physical socialization of individuals for the good of mental health and enforcement of learning skills, which are built during contact with others."

Dr. Carvalho expressed that online events left him feeling a "mix of exhaustion and frustration." He said this came from "the strong feeling that my perception through a screen of so many speakers and panels was too superficial."

The benefits of in-person events shine through in terms of human interaction, which has been sorely missed during lockdown. However, online conferences bring more people together, without the limits of space, all without the environmental damage of flying thousands of people to one place.

Even online events limit participation, just in a different way, says Dr. Carvalho, "what I want to see is humanity developing new strategies of virtual and physical interaction with social inclusion for those who cannot access these types of communication."

Fernanda Parente echoes this. She wants to see a future that combines the best of both worlds. Even as cities and countries begin to open up, she says online is here to stay: "Hybrid formats will become prominent in the foreseeable future."

Your next business meeting could be inside a VR headset

With the SARS-CoV-2 pandemic stopping in-person meetings and conferences, videoconferences are the new norm. But video calls are old technology. Soon, conferences and meetings will be held in 3D, using VR headsets. (16.04.2020)

How has life changed for women in the past 25 years?

In 1995, delegates from around the world came together in Beijing for the Fourth World Conference on Women. DW takes a look at 12 of the critical areas of concern that were flagged a quarter of a century ago. (06.03.2020)

Encore: Helping musicians through the pandemic