Libya's UN-backed Prime Minister Fayez al-Sarraj said he wants to step down by the end of October. The announcement comes amid talks on ending the country's conflict. 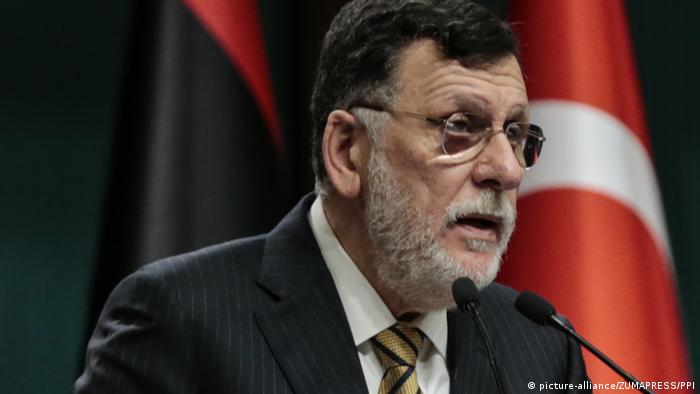 Libya's internationally recognized Prime Minister Fayez al-Sarraj on Wednesday said he wants to hand over power to a new government by the end of next month.

"I declare my sincere intention to hand over the tasks of power to the coming executive authority in a time no later than October," Sarraj said in a televised address from the capital, Tripoli.

The announcement comes amid talks between Libya's rival factions on ending the country's conflict. Earlier this month, they had agreed to hold elections within 18 months and appoint a new government.

The German government and the United Nations have announced an online summit for Libya, scheduled for October 5, DPA news agency reported.

The meeting will include UN Secretary General Antonio Guterres, foreign ministers, and representatives of the conflicting parties in
Libya, as well as representatives from Germany and the UN, the United States, Britain, France, China, Turkey, the United Arab Emirates, the Republic of Congo, Italy, Egypt and Algeria as well as the European Union, the African Union and the Arab League.

The meeting comes after Berlin organized a summit in January, where parties agreed to stop supplying weapons to the warring factions.

Differences within the Sarraj government surfaced last month during protests over corruption and power cuts in Tripoli and other western cities. The country's south and east had also reported similar protests.

Libya has been split between rival administrations controlling the country's east and west following the toppling of longtime ruler Moammar Gadhafi in the 2011 NATO-backed uprising.

Sarraj is head of the Tripoli-based Government of National Accord, which is backed by the UN.