Libya is still in crisis

Three years after the overthrow of Moammar Gadhafi, celebrations in Libya are muted. People are angry that the interim government recently extended its mandate. Elections have been promised, but no date has been set. 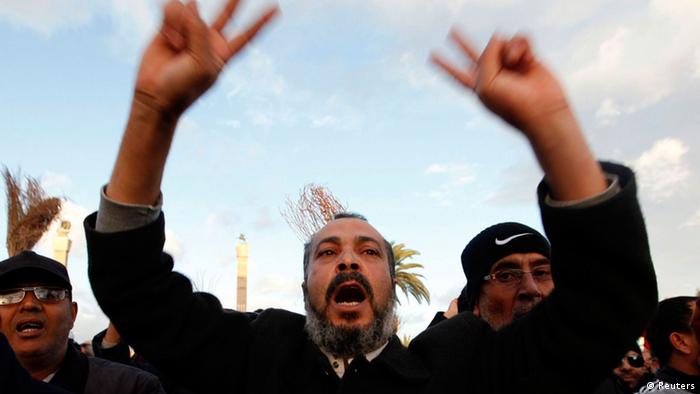 This should be a time of celebration in Libya: The rebellion that toppled former leader Moammar Gadhafi and triggered the start of the country's transition to democracy began three years ago. Yet many Libyans opted to stay away from this year's anniversary celebrations: They say the country has nothing to celebrate.

Much of the initial enthusiasm that followed the revolution has waned. Militias continue to enjoy impunity, and the political roadmap drawn up in 2011 now hangs in the balance. For weeks, demonstrators have been calling for the dissolution of a parliament whose deputies they accuse of incompetence and the abuse of power. On Sunday (02.03.2014), protesters stormed the Libyan parliament building, calling on members of the interim General National Congress to resign. Two lawmakers were shot and several others wounded. 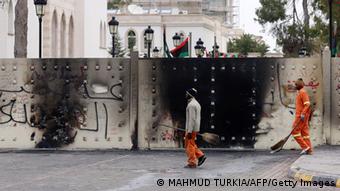 Protesters stormed the parliament building in Tripoli on Sunday, March 2

Just two weeks ago, on February 17, 2014, the streets of Tripoli were decked out with national flags to mark the overthrow of Gadhafi. For several hours, crowds celebrated on Martyrs' Square, where a dazzling firework display lit up skies over the city. However, as one resigned spectator commented: "In a few hours' time, the fun will be over and the worries will return."

The political crisis is now very serious. The National Congress, the parliament elected in 2012, is split into two cross-party camps. On one side are the Islamists and the revolutionaries, who are calling - respectively - for more influence for religion and former rebels. On the other side are the liberals and the nationalists, who want to maintain the status quo and limit the influence of the Muslim Brotherhood.

The split began with the so-called "Isolation Law," which excludes members of the former regime from holding political office. This law was pushed through in early 2013 by revolutionary militias who besieged the parliament building. The current protests are directed at the government, which has been trying for weeks to unseat the "Islamist Block." On February 7, 2014, most of its members also voted to extend its own mandate, shortly before this was due to expire.

However, Abdel Majid Mlegta, a leader of the liberal National Forces Alliance, declared the decision invalid and accused the other side of blackmail. The party leadership was obviously trying to obtain a compromise that would allow it to approve the change of government in exchange for watering-down the Isolation Law. This would give the party's founder, Mahmoud Jibril - one of the few politicians who enjoys popular support, but who is currently excluded as he held office under the previous regime - with a good chance of becoming president in the forthcoming election. 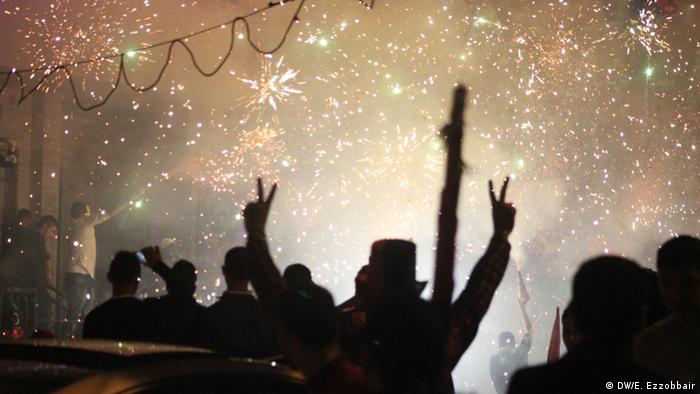 Three years after the fall of Moammar Gadhafi, many Libyans feel they have nothing to celebrate

The split endangers not only the political stability of the country but also its social cohesion. The main reason for this is that politics and military force are dangerously entangled: Both sides have used allied militias to exert pressure at the national level.

The anniversary celebrations were scarcely over before the "Qaqaa" ("Saber-Rattling") and "Sawaiq" ("Lightning") Brigades provided yet another example of this. Qaqaa commander Othman Mlegta announced that from February 7, 2014, the National Congress was no longer legitimate and demanded that power be transferred to the Supreme Court. "Parliamentarians who do not step down within five hours will be arrested," he declared.

Like the commander, many members of these two brigades come from the small but influential town of Zintan, which provides military support to the Liberal party. The Liberals were thus inevitably seen as being behind the threat. Their insistence that they had nothing to do with it convinced no one, not least because Abdel Majid and Othman Mlegta are brothers. The five-hour ultimatum was extended, reinforcing the impression that this was not a gaffe by renegade militiamen but a political power-play. 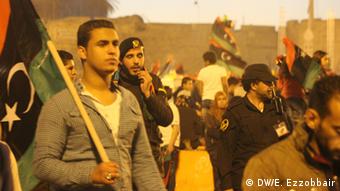 The split in the Libyan National Congress is threatening social cohesion

From the Liberals' point of view, a crisis cabinet under the supervision of the Supreme Court would be desirable, as it would temporarily silence the opposition. Forces from the port city of Misrata, who are for the most part supporters of the Islamist camp, quickly announced that they would - if necessary - "defend parliament and democracy with weapons."

Political observers of the country have also warned that if the two sides fail to reach an agreement, the militias will be fighting each other in Tripoli. The Liberals still hold a trump card: The Supreme Court is currently debating whether or not to repeal the Isolation Law.

Constitution in the crossfire

In the middle of all this, Libyans cast their votes on February 20, 2014 to elect a constituent assembly. Known as the "Committee of 60," it is tasked with hammering out a constitution within four months, thereby setting out Libya's eventual form of government, among other things.

Because this is virtually impossible, in view of the many conflicting domestic demands on the table, the incumbent government has already drawn up a Plan B that would see the election of a new transitional authority this summer, independent of the drafting of the constitution. 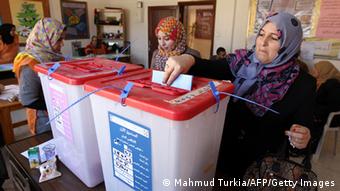 In response to sustained public pressure, Congress President Nuri Busahmain expressed his readiness to strike a compromise. In his speech to mark the anniversary of the start of the revolution, he pledged that new elections would "take place as soon as possible."

But critics say this isn't specific enough. They fear a continuation of the crisis and an intervention by political forces in the constitution-writing process, in an attempt to secure and protect their own interests. The low turnout in the constituent assembly election – 12 percent of those entitled to vote, compared with more than 50 percent for the presidential election in 2012 – reflects the frustration of voters and the fact that they were ill-prepared, despite having waited so long for the election to take place.

"I don't think I'll get enough votes," said Asma Al-Usta, a candidate for a constituency in the capital. "I wasn't able to run an appropriate electoral campaign without state support, because media fees are high. Most of those voting don't know whom to vote for."

A woman's world in post-revolution Libya?

Three years ago Libya was hurtling headlong into the revolution that culminated in the death of Moammar Gadhafi. Although instrumental in the fall of the regime, women face mixed fates in the country of new men. (17.02.2014)

Bloody tribal fighting at the gates of Tripoli

Rebels and supporters of the old regime of Moammar Gadhafi are engaged in some fierce fighting near the Libyan capital of Tripoli. The brewing conflict shows how inseparable tribal feuds are from politics. (05.02.2014)