You could count the number of Chinese star athletes who have dared to come out on one hand. Sexual diversity is tolerated in China — but only if LGBTQ people keep their sexual orientation to themselves. 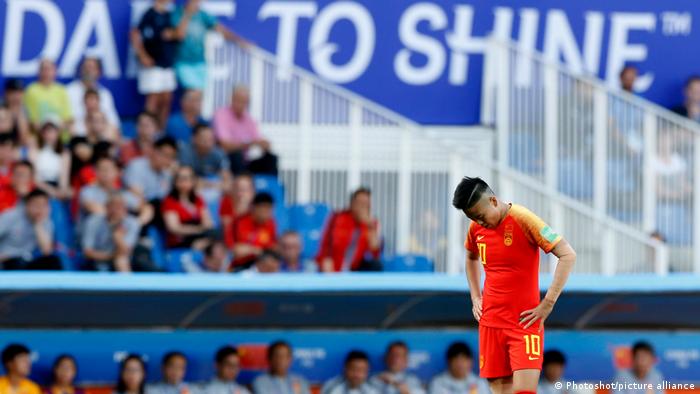 Li Ying is back with the Steel Roses. New national team coach Shui Qingxia, the first woman at the helm of the Chinese women's national footall team, has named the 29-year-old striker to the squad for the AFC Women's Asian Cup in India, which kicks off on January 20.

At first glance, this should come as no surprise. After all, at the 2018 tournament, Li scored seven goals in five matches to win the Golden Boot. The forward also scored the Steel Roses' only goal at the 2019 World Cup in France, getting the winner in their 1-0 group-stage victory over South Africa.

However, Li, who has scored 30 goals in her more than 100 games for the national team, was dropped for last summer's Tokyo Olympics. There was much speculation that this had to do with her having come out.

In a post that went viral just weeks before the Games' opening ceremony, Li Ying had made her love for influencer Chen Leilei public on the Chinese portal Weibo.

"You are the source and target of all my tenderness," she wrote shortly after the first anniversary of the start of their relationship.

"It's no secret that there are homosexuals in women's football," wrote Zhao Zen, a football journalist and blogger with more than five million followers. "But Li Ying is the first to dare to publicly announce her sexual orientation and her girlfriend. I congratulate her for her courage."

But not all the responses were positive, and some were outright homophobic. Shortly after having posted the message, it disappeared from Li's account. Could this have been due to outside pressure?

The number of female or male elite athletes in China who come out as gay can still be counted on one hand. After Li Ying, volleyball star Sun Wenjing dared to come out last September, but only two years after she had ended her playing career.

In 2018, professional surfer Xu Jingsen became the first gay athlete in China to come out when he used Weibo to announce his intention to participate in the Gay Games in Paris.

"Yes, I am gay," Xu wrote, posting a photo montage showing him on a surfboard in front of a rainbow flag. "We have the right to choose love and to be loved. Sex, age and skin color are not shackles."

Xu went on to carry the flag for the 69-strong contingent from mainland China at the opening ceremony in Paris. The next Gay Games were originally scheduled to be held in Hong Kong in 2022 but were postponed until November 2023 due to the COVID-19 pandemic. Gay athletes from Taiwan have already announced that they will not participate in the Games due to concerns about their safety.

In 2019, Taiwan became the first Asian country to legalize same-sex marriage, but it remains banned in mainland China. Sexual diversity is tolerated by the communist rulers, but only as long as people keep their orientation to themselves.

Any public expression of sexual diversity is bound to run into resistance. Shanghai Pride, which was the oldest and largest LGBTQ event in China, with bicycle parades, Pride runs, parties, forums and exhibitions, was shut down in 2020. Even before that, the event's organizers were subjected to harassment from government censors. 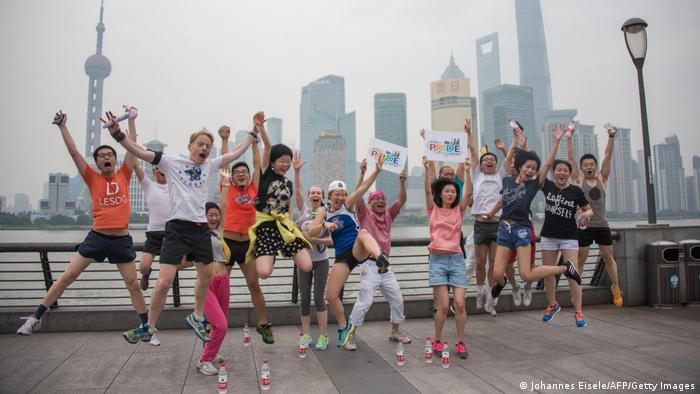 In July 2021, the Ministry of Civil Affairs blocked and removed hundreds of LGBTQ websites and social media user accounts, especially at universities.

"It is impossible for China to get to the forefront of the world on this issue," Hu Xijin, editor-in-chief of the state-run "Global Times", wrote on his blog, defending the authorities' actions. "Our certain conservativeness is inevitable and reasonable."

Last September, "sissy men" were banned from television on the instructions of President Xi Jingping.

The LGBTQ community has adjusted to the harder line.

"Since authorities in China launched a crackdown on organizations supporting LGBTQ rights on college campuses, we have been very careful about not making any event too LGBTQ-oriented," a Chinese LGBTQ activist who asked to remain anonymous, told DW.

"While the government has certainly tightened their control over LGBTQ organizations, members of the community will still find ways to organize activities that put less emphasis on the queer elements," he said. "We are all adapting to the new climate in China, which is being more discreet."

According to a documentary by "Dao Insights", the number of people in China who are lesbian, gay, bisexual, transgender or queer is estimated at around 70 million. The country of 1.4 billion people is still a long way from openly embracing sexual diversity.

"Sexual and gender minority people in China still live in the shadows, with only 5% of them willing to live their diversity openly," a 2016 study by the United Nations Development Programme (UNDP) stated.

The fact that Li Ying was dropped from the national football team for the Tokyo Olympics may or may not have had to do with her coming out.

Six months prior to her Weibo post she had already made her love for Chen Leilei public on Facebook. Access to the US-based social media network has been blocked in China for more than a decade, but it's hard to imagine that it would have escaped the attention of state censors – who in turn would have brought the post to the attention of the national FA and coaching staff. 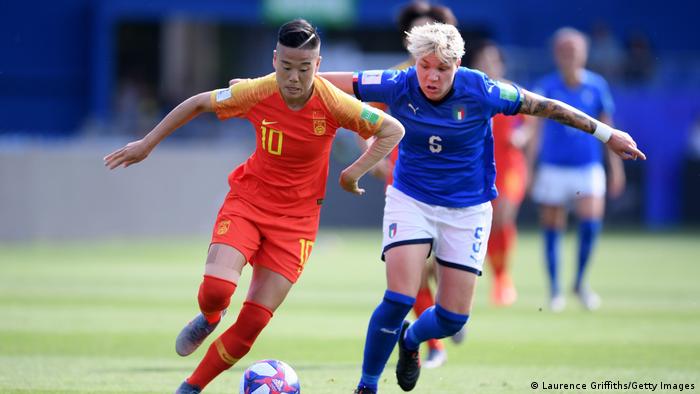 Li Ying (left) seen here in a World Cup match against Italy, is one of China's most prolific goal scorers

Still, weeks later, in February, the striker did feature in three Olympic qualifying matches, and scored three goals – before being dropped for the playoff games against South Korea in April. Also dropped from the Olympic squad were Tang Jiali, who plays for Tottenham Hotspur, and midfielder Shen Mengyu of Celtic.

In the absence of the three, China's Olympic experiment went completely off the rails, with the young, inexperienced team only able to earn a draw out of their three preliminary round matches – while being outscored 17 to 6. National team coach Jia Xiuquan was forced to resign.

Shui Qingxia, his successor, has brought all three back into the fold, and Li Ying is part of the squad for the Women's Asian Cup. And while the striker is active on Weibo again, now she is largely limiting herself to writing posts about football – and she's made no mention of her relationship.