Formula One champion Lewis Hamilton has claimed pole position for the season-opening Australian Grand Prix in Melbourne. It was his fifth straight pole and seventh in Melbourne. 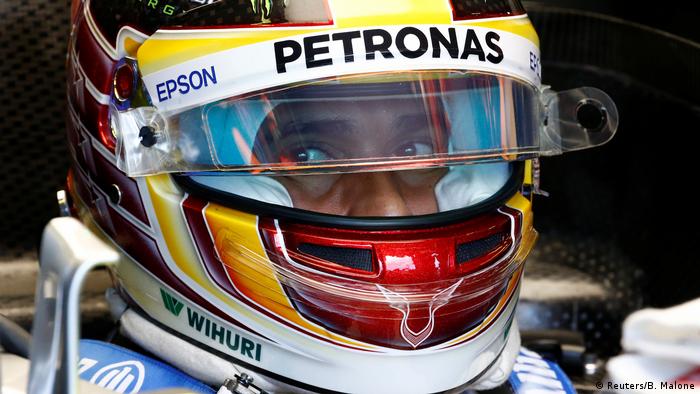 Mercedes' Lewis Hamilton dominated the last lap at the Albert Park circuit in Melbourne on Saturday to grab pole position for the Australian Formula One Grand Prix.

The Briton lapped the circuit in 1 minute and 21.164 seconds, which was 0.664 seconds clear of Ferrari's Kimi Raikkonen. Ferrari's Sebastian Vettel finished third.

By taking pole position on Saturday, Hamilton extended his record to 73 poles overall.

Hamilton's Saturday's performance showed the world champion would be the favorite to win this year's Australian Grand Prix.

Read more: Formula One: Five changes for the 2018 season

"I'm so happy with that lap. It was such a nice lap. I'm always striving for perfection and that was as close as I could get," Hamilton said, adding that it was "surprising was to see how quick the Ferraris were." The British driver insisted they should not be taken for granted.

"You would think that with the results we had it would be the norm but it isn't. It's so intense and my heart is racing," he said.

Hamilton's teammate, Valtteri Bottas, suffered a heavy crash in the final shootout. Bottas was unharmed, but the session had to be paused for 10 minutes to clear the debris.

While last year's race winner Vettel regretted that Hamilton "had quite a big gap at the end," he said his lap "was pretty good" as well.

The German said he could still challenge Hamilton to win the Australian Grand Prix.

"It's very close; we saw yesterday on the long runs that the pace is very close," Vettel said.

"It's not the easiest place to overtake, but who knows. We have an opportunity at the start. I'm really happy for the team, it's a good result. Let's get going," Vettel said.

Both Hamilton and Vettel are hoping to clinch their fifth world title in a season with a record 21 grands prix.

Formula One champion Lewis Hamilton has said he is sorry for publicly making fun of his young nephew for wearing a princess dress. He said it was "not acceptable" to "marginalize or stereotype anyone." (27.12.2017)