Lewis Hamilton won the British Grand Prix after another commanding drive but both Mercedes suffered punctures in the closing stages. Hamilton was able to limp over the line, but teammate Valtteri Bottas wasn't so lucky. 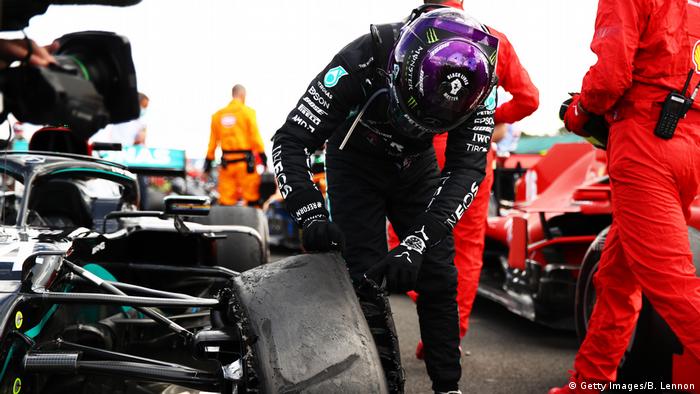 Lewis Hamilton's front left tire gave up halfway through the final lap of the British Grand Prix but Hamilton didn't, as he limped over the line to win for the seventh time at Silverstone.

Aside from the late drama, it was a routine victory for Hamilton, who led from start to finish. Mercedes had looked certain to secure maximum points again but Valtteri Bottas also suffered a puncture, this time on the penultimate lap, and that saw the Finn finish just outside of the points in 11th.

"Down the straight the tire deflated and that was a heart-in-the-mouth moment... I was just praying to get it round," said Hamilton. "I've definitely never experienced something like that on the last lap."

Renault — Despite the win for Mercedes, it was a great day for the two Renaults. Daniel Ricciardo and Esteban Ocon finished fourth and sixth respectively, making it a fine outcome for the French constructors.

Daniel Ricciardo (Renault)— Despite finishing just outside the podium places, it was a great result for Ricciardo, who finished fourth after qualifying eighth fastest. Helped by the technical problems and subsequent indecision of the McLaren-Renaults ahead of him, Ricciardo had applied the pressure in the first place and picks up some valuable points,

The crazy finale— There were punctures for both Mercedes and Grosjean in the final couple of laps, which lit up an otherwise unremarkable race. It threatened a DNF for Hamilton, but in the end he was able to steer his car home for victory.

Lap 52/52 HAMILTON WINS THE BRITISH GRAND PRIX! Hamilton only limps over the line in the end as he also got a puncture! But he wins, Verstappen takes second and Leclerc somehow gets on the podium too.

Lap 51/52 Disaster for Bottas! The Mercedes drive gets a puncture on the penultimate lap and Verstappen passes him to get second! It looks like the Red Bull won't be the only car to pass Bottas, who has got very unlucky there. Meanwhile, Hamilton is cruising to victory.

Lap 45/52 "Carlos needs to get a move on," says Norris, who is starting to feel the heat from Ricciardo behind him. Turns out Sainz is suffering from vibrations too, which could give Norris a shot at his teammate in the closing stages. But no... Norris' fears are confirmed as he is passed by Ricciardo!

Lap 40/52 Verstappen pits and it's a free one for the Red Bull, with Leclerc some 25 seconds back in fourth. Up top, Hamilton is gradually getting clear of Bottas, but the Finn remains just under three seconds behind his teammate despite some vibration issues.

Lap 35/52 Albon pits and serves a five-second penalty for his earlier clash with Magnussen. Albon is 17th, which also means last. At the front, the two Mercedes continue to trade fastest laps as they continue to pull clear of Verstappen's Red Bull.

Lap 30/52 Over halfway through the Grand Prix and Hamilton's lead is still at 2.1 seconds. Max Verstappen is a further five seconds back in third. Bottas has just set a new fastest lap.

Lap 25/52 Sainz seizes fifth from Grosjean, but the move will be the subject to investigation. Sainz was guilty of a weave, which may land him in hot water. Ricciardo trying his luck against Grosjean now, but for now he's holding firm.

Lap 20/52 The safety is out again, this time after Kvyat crashes. Hamilton complains that the safety car is going too slowly, which was greeted with agreement by the other drivers. The safety car eventually makes way once more...

Lap 15/52 Hamilton pits and that triggers all of the front runners to do the same. Bottas, Verstappen and Leclerc all change tyres in quick succession. Grosjean, in fifth, elects to stay on the mediums though.

Lap 10/52 Hamilton sets the fastest lap, but Bottas responds with a fastest lap of his own. But Hamilton is already 1.5 seconds ahead of his teammate.

Lap 5/52 The safety car has made way, with no drivers deciding to take a gamble with a trip to the pit lane. Hamilton made a quick run for it, leaving Bottas and Verstappen napping a bit. Sainz and Ricciardo in pursuit of Leclerc.

Lap 1/52 GO GO GO! Leclerc briefly passes Verstappen for third, but the Red Bull fends off the Ferrari to hang on to his place. At the front, it's a clean start for the two Mercedes. However, the safety car us deployed after a collision between Albon and Magnussen, which puts Magnussen out of the race.

World champion Lewis Hamilton swept to a seventh pole position at his home grand prix on Saturday, finishing much faster than teammate Valtteri Bottas in another impressive display by Mercedes.

Hamilton, who had not topped any of the three practice sessions nor the first two parts of qualifying during which he even spun, was there when it mattered with a Silverstone record time of 1 minute 24.303 seconds. It's his 91st career pole and third of the season.

Bottas trailed by a massive three-tenths of a second and Max Verstappen was a distant third for Red Bull, more than a second behind Hamilton.

Max Verstappen. “Mercedes was just way too fast. You try to do the best you can and I did that. From third, you have a fighting chance."

The 5.891 kilometer Silverstone track is one of the cathedrals of motorsport.

On the F1 calendar since the inaugural season in 1950, it offers an all-round test for the drivers with a mix of high-speed sweeping turns and hard braking zones — there are 18 corners in total.