Lewis Hamilton led from start to finish to win the Hungarian Grand Prix, his second win in a row. The Briton will go in to his home race on top of the standings, after Max Verstappen pipped Valtteri Bottas to second. 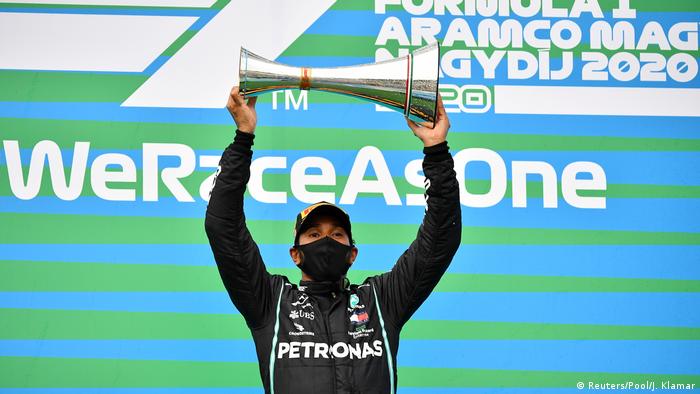 Lewis Hamilton followed up last week's win in the Styrian Grand Prix with another victory in Hungary, to put Mercedes in a strong position going into next week's British Grand Prix.

After claiming a seventh straight pole at the Hungaroring, equalling Michael Schumacher's record in Budapest, Hamilton never looked in danger of relinquishing first place. He has now matched Schumacher's win record for the most wins in a single Grand Prix, with eight.

Dutch rival Max Verstappen endured a more dramatic afternoon, crashing into the barriers on the practise lap, putting his place on the grid in doubt.

But the Red Bull engineers did an impressive repair job to get the car ready – and Verstappen rewarded them by jumping from seventh to third on the first corner when the lights went out, and then going second shortly after. He eventually finished second, ahead of Hamilton's teammate Valtteri Bottas, who got off to a poor start.

Drive of the day — Max Verstappen. The Dutchman was a doubt to even make the grid after crashing on his way to his starting spot, but still finished second.

Quote of the day — "I want to say thank you to the mechanics. You guys saved the day. You're legends" – Verstappen.

The champion takes the fastest lap point on the final lap to ensure its maximum points. A consumate drive from start to finish. His teammate Valtteri Bottas recovered from a shocking start to finish third behind Max Verstappen, who made a recovery of his own after crashing on his way to the grid.

Lap 68 of 70: Hamilton has it in the bag. Two big questions remain: can he take the fastest lap point? And can Bottas snatch second from Verstappen?

Lap 66 of 70: The champion gets his way and is out comfortably in front of Verstappen. Further back, Albon has gone past Vettel to send the German down to sixth.

Lap 65 of 70: Hamilton may well want to come in to have a stab at taking the fastest lap point from his teammate. He's got a big enough lead but is running out of laps.

Lap 64 of 70: Very odd there. The Mercedes crew seemed ready for a Hamilton pit stop that never came. Seemed a bit of confusion on the radio there.

Lap 60 of 70: Hamilton still out there and still leads, now by almost 25 seconds. Bottas hasn't quite mounted the challenge to Verstappen that might have been expected. Not yet, anyway.

Lap 55 of 70: Hamilton on the radio says his tires "don't feel good". His lead over Verstappen is 22 seconds, can he pit with his lead in tact?

Lap 53 of 70: Stroll hits the pits, it's nice and quick and he manages to get in and out ahead of Vettel, disappointing for the German there and Stroll has a good opportunity to have a decent pop at the podium.

Lap 49 of 70: Red Bull could be in trouble after appearing to dry the track under Albon's car during a pitstop. That could even mean a disqualification in the worst case.

Lap 45 of 70: Vettel up in to fifth for now, after a bit of pitting from others. Hamilton looks fairly safe but the minor places are up for grabs.

Lap 41 of 70: Bottas is rocketing round the track now and gaining on Verstappen rapidly. Looking very much like yet another Mercedes 1-2.

Lap 33 of 70: Bottas, also now on hard tires, duly takes the fastest lap point and moves to third. There seem to be mixed thoughts on whether this rain is coming.

Lap 33 of 70: Instant result for Vettel, who lays down the fastest lap time so far.

Lap 31 of 70: Vettel now going to hard tires, without waiting for the expected rain shower. A gamble? Hamilton has lapped both Ferraris, though Leclerc and Vettel have both pitted twice.

Lap 29 of 70: Ferrari must be expecting Leclerc to make it to the end on his new tires but he's got some serious work to do. There's some talk that rain is not far off.

Lap 24 of 70: Hamilton, so good at leading from the front, is still doing exactly that. He looks to tally untroubled. At the other end of the scale, Leclerc is not a happy bunny and has pitted again to try different tires. He's down in 15th, a lap behind the leader.

Lap 19 of 70: Vettel, who looks much quicker than Leclerc, now passes his Ferrari teammate on the outside. The German is up in eighth.

Lap 18 of 70: Stroll, as expected, slips past Magnussen back up in to third. There's a real battle between the two Ferraris and Albon's Red Bull car, which is sandwiched between them. Finally, Albon slips past Leclerc in to seventh but the Frenchman won't let teammate Vettel through. Elsewhere Gasly has retired, with flames coming from the back of his vehicle.

Lap 13 of 70: Bottas easing his way up the field again now, after a slick overtake on Grosjean helped him up to fifth. Vettel, after that shoddy pit stop is still back in ninth. It looks like Hamilton vs. Verstappen, with Bottas also in the frame. Pretty incredible from the Red Bull driver after he crashed on the way to the grid.

Lap 9 of 70: Hamilton has reclaimed the fastest lap from Bottas. It's all settling down a little now. The Englishman's lead is now more than 8 seconds.

Lap 8 of 70: It sounds like Bottas may be penalized for that jump start.

Lap 7 of 70: Right, after all that tire changing, Hamilton still leads and Verstappen  just set a new fastest lap. Bottas', after this jump start is down in seventh just ahead of Vettel.

Lap 4 of 70: Hamilton eased ahead early on and continued to cruise, the gap to second was over seven seconds at one point. But then Bottas and Hamilton pitted , changing to medium tires it seems. Vettel then pits but can't find an easy route out. He will have lost some time there. Stroll has also gone in and out. Frantic.

Lap 1 of 70: Lights out and a shocker from Bottas, who drops right down to sixth. In better news for Mercedes, Hamilton retains his lead while Stroll moves to second and Verstappen shakes off his pre-race nightmare to move up from seventh to third. Vettel sits in fourth.

-- Verstappen looks to have made it to the start somehow, but the condition of his car remains to be seen.

-- The Red Bull mechanics are still working away on fixing Verstappen's car. There's only ten minutes to go. Arguably the best driver in the wet could miss out in the rain, here.

-- Max Verstappen has managed to crash on the way to the starting grid and the Red Bull mechanics have had to find a new nose cone and a front wing. Not an ideal start. It happened on Turn 12, which is likely to cause real problems in these slippery conditions.

-- There's a little rain in the air today and it looks likely to be intermittent during the race. That could be good news for Ferrari's Sebastian Vettel, who was quickest in the wet on Friday.

"It should be an exciting race," the German told Sky Sports. "We will see. I hope we don't have to start behind a safety car.

"Their [the cars in front of gim's] pace is genuine, not just in qualifying but also the race. If you are fast, you are fast. It will be a bit of a stretch but we will try."

-- Reigning champion Lewis Hamilton claimed his second successive pole of the truncated 2020 Formula 1 season with a track record, while teammate Valtteri Bottas completed an all Mercedes front row. The two drivers have won a race each so far and already look likely to battle for the driver's title.

Six-time world champion Hamilton clocked a rapid time of one minute and 13.447 seconds on his second run, while Racing Point came in  third and fourth with Lance Stroll and Sergio Perez. Following them were Sebastian Vettel and Charles Leclerc for Ferrari, after a much-improved display by the Italian team. Racing Point have caused some controversy this year, with a car designed closely on that which won the title for Mercedes last year.

What the drivers said

-- "I have to pinch myself. It doesn't register [matching Schumacher's record of eight poles in Hungary.] It's quite humbling because I work with an incredible bunch of people who do an amazing job here and back home."
Lewis Hamilton

-- "I'm very happy. The car was really strong throughout today and the whole weekend so far. It feels great when you manage to put it all together at the end of qualifying."

Lance Stroll, who sits third on the grid.

-- The Hungaroring is a familiar location, with a track that doesn't tend to quicken up all that much over a race weekend. Conditions during qualifying were cooler than usual for the time of year, with rain threatening but never falling.

Overtaking is always tough, given the tracks frequent twists and turns, and it's sometimes compared to that used at Monaco.

On the track, Sebastian Vettel continues to trail the pack. However, when it comes to issues like environmental protection, sexism or racism, the former F1 champion is making his voice heard — not to everyone's liking.