A faction within Germany's Left Party has been criticized for posting a comic of a grim reaper holding a bloody scythe painted to resemble the flag of Israel. The group was commenting on the Venezuelan political crisis. 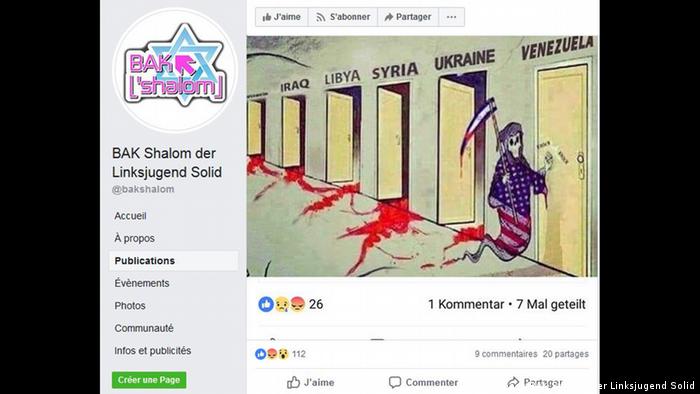 A far-left faction within Germany's socialist Left Party has retracted a cartoon insinuating that Israel was instigating a violent coup in Venezuela after party members accused it of anti-Semitism.

The Cuba Si Hessen group posted the image on Facebook on Wednesday. It shows a grim reaper cloaked in a United States flag and holding a bloody scythe painted to resemble the flag of Israel.

The figure knocks at a door titled "Venezuela." Blood spills out of other opened doors marked "Iraq," "Libya," "Syria" and "Ukraine."

The group captioned the image with: "We stand on the side of the legitimate Venezuelan president, Nicolas Maduro, and oppose any form of intervention. Yankee go home!"

'We didn't notice the Star of David'

One of the Left Party's pro-Israel factions, Shalom, condemned the post on its Facebook page a day later.
Read more: Things to know about Germany's Left party

The image used "anti-Semitic references" to side with "crude anti-Americanists" in its interpretation of the political crisis in Venezuela, it said.

"We didn't notice the Star of David," the group said. "We had intended to criticize the roll of the United States in the undemocratic coup currently being instigated by the right-wing opposition in Venezuela." Israel, it added, "had nothing to do with the coup."

Read more: Germany's political parties — what you need to know

Cartoon 'not suitable' for criticism

The head of the Left Party in the central state of Hessen criticized Cuba Si Hessen in comments to Die Welt newspaper.

"The cartoon is not a suitable way of criticizing the role of the United States in the current situation in Venezuela," Petra Heimer said.

The Left Party is a successor to the Socialist Unity Party of Germany (SED) that ruled East Germany from 1949 to 1989.

Since its founding, it has often criticized Israel for its role in the Middle East conflict. Party members have, however, repeatedly been accused of crossing the line from criticism of Israel to anti-Semitism.

In 2011, activists in the western city of Duisburg handed out flyers critical of Israel that included a Star of David merged with the Nazi swastika.

In the same year, the head of the Central Council of Jews in Germany, Dieter Graumann, said "the old anti-Zionist spirit of East Germany is still haunting the party."

"Paradoxically, it is mainly representatives from western Germany who today act out an almost pathological, blind hatred of Israel."