The top Social Democrat in Germany's Bundestag has called a regional Alternative for Germany leader a "Nazi." In January, Björn Höcke said he thought Germany paid too much reverence to victims of the Holocaust. 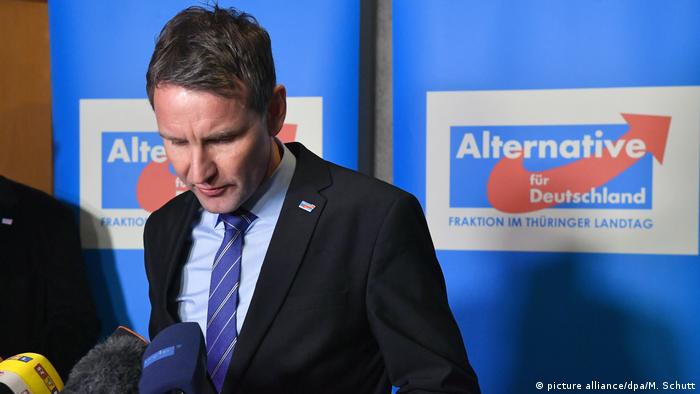 The chairman of the Social Democrats (SPD) in Germany's parliament on Saturday doubled down on his assertion that Björn Höcke, the disgraced Thuringia state parliamentarian for the Alternative for Germany (AfD), is a "Nazi."

Thomas Oppermann's remark came specifically in response to the AfD state speaker's statements that criticized Germany's commemoration of its Holocaust crimes. However, Höcke and other members of the AfD have also consistently made outrageous statements about refugees and Germans of color.

"For me, Björn Höcke is a Nazi," Oppermann said at Saturday's meeting of the SPD's state delegates in Thuringia. "Someone who wants to resuscitate the ethnic ideology of the National Socialists has no place in a democratic society."

Oppermann said Germany could no longer tolerate discrimination based on gender, religion, national origin or heritage. "Someone who does not observe this ground rule of democracy has no business in the Bundestag," he said.

"These stupid politics of coming to grips with the past cripple us," Höcke told the AfD's youth wing in January. "We need nothing other than a 180-degree reversal on the politics of remembrance." Referring to Berlin's Memorial to the Murdered Jews of Europe, he added: "We Germans, that is to say, our people, are the only people in the world who have planted a monument of shame in the heart of their capital."

After AfD leaders initiated proceedings to expel Höcke from the party, he attempted to backpedal on his statements. Speaking at a Thuringia state meeting of the AfD last week, Höcke said he had made a "mistake" and taken the wrong tone with what is a very serious subject.

The AfD had nicked voters from both the center-right and Oppermann's own center-left SPD, but the German public's taste seems to have turned a bit following Höcke's disparaging of the commemoration of the nation's mass murders. The SPD has now overtaken German Chancellor Angela Merkel's Christian Democrats, 32 percent to 31, in polls ahead of September's elections,and the AfD is third,  with 11 percent - a number that once would have been unthinkable for a far-right party.

The diverse city of Cologne is bracing for massive protests ahead of the AfD's planned party congress in April. The willingness of the Maritim Hotels group to host the event and other AfD meetings has led to nationwide calls for boycotts.