German officials fear "sensitive" asylum files in the lawyer's possession may now be in the hands of Turkey's intelligence service. 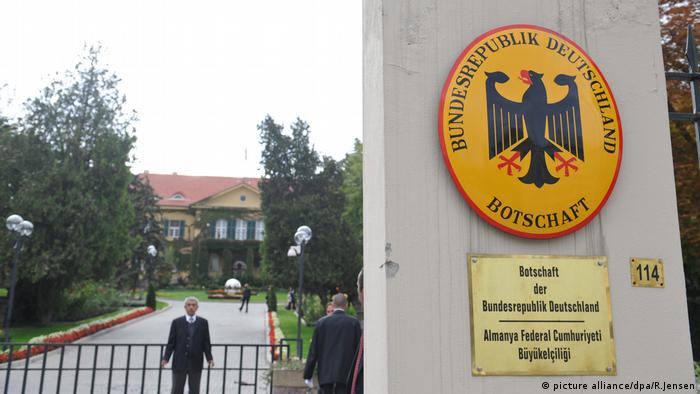 The man, from Turkey, had been assisting the embassy in Ankara by looking into the cases of Turkish citizens seeking asylum in Germany, according to news magazine Der Spiegel, which first broke the story.

A German diplomatic source told Agence France-Presse that the lawyer had provided "internationally customary and, in our view, indisputably acceptable support."

"His detention is incomprehensible to us," they added.

The diplomatic source said Germany was "intensively engaging to clear up the allegations and free him from custody."  The lawyer, who Der Spiegel says has been accused of espionage, cannot receive consular assistance from Germany because he is a Turkish citizen.

As part of his work for the embassy, the lawyer had sought information from local police and prosecutors about the likelihood of certain asylum-seekers facing imprisonment on their return to Turkey.

The German government now fears that "sensitive data and entire files of up to 50 asylum-seekers have reached the Turkish intelligence service," the diplomatic source said.

Turkish authorities may have seized more than 250 other files in a search of the lawyer's offices, German media reported.

Many of the files concern pending asylum claims, including those of Kurdish activists and followers of US-based Islamic cleric Fethullah Gulen, who Turkish President Recep Tayyip Erdogan accuses of orchestrating a 2016 failed coup.

Sevim Dagdelen, a member of the German parliament from the Left party with Turkish-Kurdish roots, criticized the foreign ministry for waiting nearly two months since the lawyer's arrest to make the incident public.

"By not knowing about the actions of Turkish authorities and their acquisition of highly sensitive data from political refugees for more than two months, hundreds of people seeking protection in Germany were probably exposed to immediate danger from the Turkish secret service and from Erdogan's network of spies and thugs in Germany," she told DW.

An "Islamic State" fighter from the US has already been deported and plans are to repatriate a German and a Danish citizen later on Monday. Ankara is also preparing to return scores of other Europeans. (11.11.2019)

Four of six Germans arrested this week have been conditionally released, according to local media. They have been accused of spreading pro-Kurdish propaganda. (07.10.2019)

Prominent Turkish journalist Ahmet Altan was among those detained in a government crackdown following the failed coup attempt of 2016. He was rearrested after an appeal of the ruling that set him free. (12.11.2019)