Greek lawmakers are set to hold a third vote to elect a new president. Should the sole candidate fail to get the number of votes required, this will trigger an early election, possibly endangering the country's bailout. 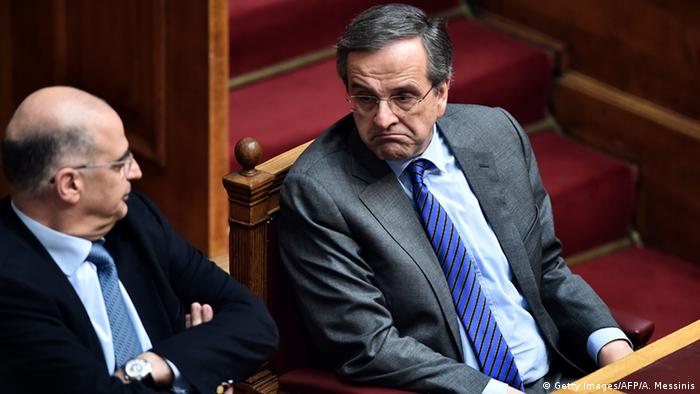 Prime Minister Antonis Samaras (pictured right) was set to go into Monday's vote in parliament knowing that if his candidate, Stavros Dimas (pictured left), fails to get enough support to be elected president, it will spell the end of his conservative-center-left government.

In last week's second round, Dimas, 73, a former European Commissioner, fell 32 votes short of the 200 required. In Monday's third round, he will only require 180 votes to be elected.

Under Greece's constitution, failure in the third attempt to elect a successor to 85-year-old Karolos Papoulias would trigger snap elections, and recent opinion polls put the far-left Syriza party ahead of his coalition.

Over the weekend, Samaras continued to try to persuade the hold-out lawmakers to support Dimas, in order to avoid early polls.

"The Greek people don't want early elections. The Greek people understand where this adventure could lead," Samaras said in an interview broadcast on Nerit public television on Saturday.

The "adventure" that the prime minister was referring to was the very real possibility that an early vote would be won by Syriza, a party that opposed the terms of the EU-IMF bailout, which has kept Greece from defaulting on its debts - and has vowed to seek to renegotiate them.

However, according to a recent opinion poll conducted by the Alco institute, while Syriza would become the biggest party in snap elections, it would not win enough seats to govern on its own.

Concerns about where Greece is headed politically, caused German Finance Minister Wolfgang Schäuble to weigh in on the issue on Saturday.

"We will continue to help Greece along the path of difficult reforms," Schäuble told the mass-circulation Bild newspaper. However, if Greece "decides to take another path, this will be more difficult," he added.

Stavros Dimas has lost the first round of a critical presidential ballot. Should he fail to gain approval of at least 180 lawmakers, it could spell disaster for the nation's economic recovery. (17.12.2014)

Brexit: UK to restart trade talks with EU after threatening to quit 25m ago