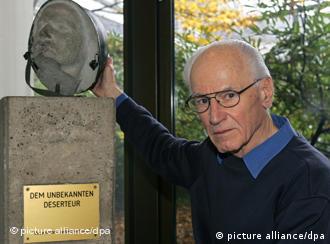 Ludwig Baumann has fought for the honor of 'traitors'

Germany's parliament, the Bundestag, voted unanimously on Tuesday to rehabilitate soldiers sentenced to death for deserting during World War II.

The legislation is the culmination of a decades-long battle for justice on behalf of those who turned their backs on Hitler's forces.

'War treason' was a vague judicial term from the pre-Nazi period. The Nazis applied it to soldiers, and finally even civilians, in various situations: for desecrating an image of Adolf Hitler, for having the wrong political attitude, for conversing with prisoners of war, for warning or helping persecuted Jews, or for dealing on the black market, to name a few.

Historians estimate that Nazi military tribunals sentenced about 30,000 people to death for desertion or treason during the war; 20,000 were executed. An estimated 100,000 people received prison sentences. If they survived, it was with a criminal record. Finding work became a problem, and they were branded for their "betrayal of the Fatherland." 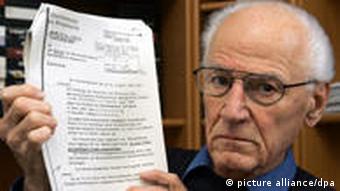 Germany's major political parties had first declined to support the current legislation because it was brought before parliament by the Left Party. Many of the party's leading figures were once members of the Communist Party of former East Germany. The parties finally agreed to sponsor the bill when the Left Party removed itself from the list of backers.

Arbitrary rulings under the treason law

Conservative politicians had opposed collective rehabilitation, calling instead for a case-by-case review to determine whether there had been any "legitimate" convictions. But a justice ministry review headed by Hans Hugo Klein, a former judge at the constitutional court, established that the Nazis' treason law was a merciless instrument of repression, and was so vague that it gave room to arbitrary rulings.

Rehabilitation of the 'war-time traitors' will be a long-delayed victory for one man in particular: Ludwig Baumann, 87, who in 1990 founded the Federal Association of Victims of Nazi Military Justice. Since then he has fought an uphill battle against prejudice and bureaucracy to see the records wiped clean. He is the sole survivor of the group who initiated the association 20 years ago.

"I didn't want to be part of it any longer"

Baumann was an infantryman in occupied France when he deserted his regiment in 1942. He was caught and tortured and spent 10 months in a death cell. His sentence was converted to 12 years imprisonment, and he was sent to the army prison in Torgau, Germany.

He survived, but when he returned to Germany after the war, he found that the stigma of treason clung to him.

"I received many death threats. We were treated like as cowards, scumbags and traitors. No one was on our side."

One group left to fight for

It took years before opinion started to turn. Finally, in 1998 and 2002, laws were passed that rehabilitated conscientious objectors, those found guilty of undermining the war effort, spies and deserters – among them Baumann himself.

That left the small group of those charged with military treason - and Baumann continued his battle on their behalf, despite the fact that his own honor had been restored.

According to Baumann, 68 death sentences were handed down for wartime treason, and they were all executed but for one. General Walther von Seydlitz-Kurzbach survived because he was by that time a Russian prisoner of war.

Baumann is pleased that parliament is about to close one of the last chapter's of Nazi military arbitrariness. But that does not mean he has forgotten the past: “It was such a horror, it hounds me to this very day.”

Germans have gathered throughout the country to honor military opposition to Nazi Germany and to mark the 65th anniversary of a failed plot by German resistance fighters to kill Adolf Hitler. (20.07.2009)