Millions of hectares of land in Africa, Asia and Latin America find their way into the hands of large-scale foreign investors each year. The victims of "land grabbing" are local villagers and farmers. 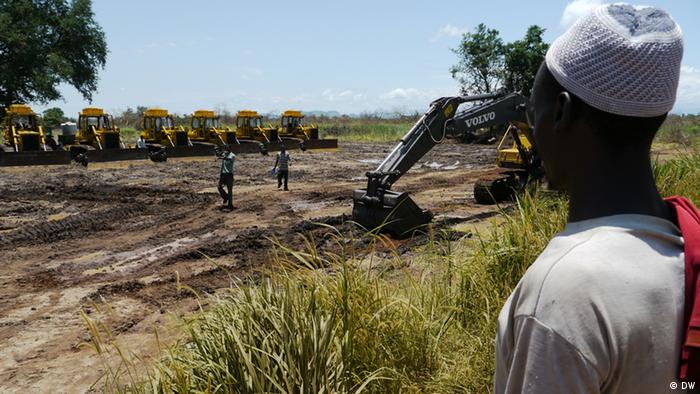 The figures are immense: 32.9 million hectares (81 million acres) of land in developing and emerging countries have been leased or sold to foreign investors in recent years - an area around the size of Germany. Negotiations are underway for a further 54 million hectares. These are the estimates of numerous NGOs. This phenomenon, known as land grabbing, has only recently happened on such a large scale. When food prices across the global market tripled in 2008, interest in cheap agricultural land surged.

It is often countries dealing with unstable situations when it comes to food, such as Saudi Arabia or India, that are keen to cultivate agricultural products abroad for their own population. Food corporation giants are also buying thousands of hectares of land and producing crops such as rice, soya, or plants for the production of agro-fuels on an industrial scale. In addition, financial investors see the cheap land as a new opportunity to generate profit through speculation over rising prices.

Land grabbing happens in almost all parts of the world, though on a greater scale in Latin America, Asia and sub-Saharan Africa. The Ethiopian government, for example, has made around four million hectares of land available for lease, reports from NGOs say. Foreign investors are attracted by contract periods of up to 99 years and exceedingly low rents.

Livelihoods under threat: farmers in Ethiopia

Land grabbing often occurs at the very margins of legality. In many African countries, all land is owned by the state, and governments see the lease and sale of agricultural land as a way to fill their coffers. This land is frequently situated in especially fertile areas with good access to water resources. Some governments talk of 'unused land,' although many farming families have cultivated crops or grazed cattle on these fields for centuries.

The consequences for locals are serious. They must often leave their villages to make way for new agricultural development - 100,000 farmers have already lost their livelihoods in this way.

Land grabbing as a development opportunity?

Despite such problems, the World Bank and the UN's Food and Agriculture Organization (FAO) have been highlighting the potential opportunities generated by this kind of land investment. Investors bring new technologies and expertise with them, opening up the possibility of farmers learning from the methods of these large agro-businesses. The infrastructure in these regions may also benefit. Nevertheless, many of the countries selling and leasing land are more interested in topping up government coffers than in development.

Voluntary guidelines set by the UN in 2012 promote the protection and support of local populations and farmers. The aim is for their interests to be taken into greater consideration throughout such land transactions in the future. So far, however, these guidelines have proved to be a mere paper tiger, as governments continue to choose whether or not to implement them.

According to a fresh United Nations report, one-in-eight people worldwide still goes hungry. And although progress has been made in many regions, a relevant Millennium Development Goal looks hard to meet. (01.10.2013)

About a quarter of all land globally is desertified. This includes a lot of land that could be cultivated. The loss in economic terms is huge. Reforestation projects in Africa provide hope for the future. (25.09.2013)

The UN passed a series of voluntary guidelines to prevent land grabbing and protect small-scale farmer's rights a year ago. But so far the rules haven't had much impact on foreign investors buying up land. (13.06.2013)