About a quarter of all land globally is desertified. This includes a lot of land that could be cultivated. The loss in economic terms is huge. Reforestation projects in Africa provide hope for the future. 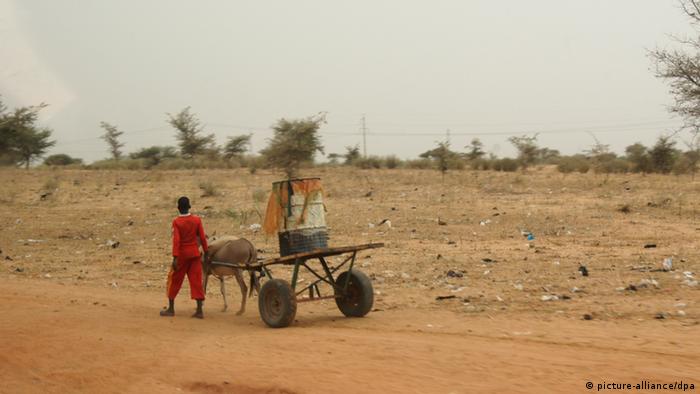 The Namibian capital Windhoek is currently hosting a conference on desertification. It is the 11th session of the Conference of the Parties to the United Nations Convention to Combat Desertification (UNCCD) and is being held to review progress after the first half of a 10-year strategy. "The Economics of Land Degradation" is the title of one of the reports presented in Windhoek. DW spoke to Richard Thomas, one of the lead authors of the report.

DW: Mr Thomas, what is the answer to the problem of land degradation?

Richard Thomas: We have to turn the rhetoric around, away from this doom and gloom story of degraded lands and creeping deserts, and put value on what investments in sustainable land management can bring to degraded lands. There is tremendous potential there, even the private sector is now getting interested in land that they formerly had little interest in because they know the frontier of open lands is now closing and most of the production increases that we can expect will, in fact, come from these marginal or degraded lands.

This is a huge problem in Africa. What is the scale of the problem there and what is being done to combat it?

Yes, it is huge in Africa - but there are also very good success stories in Africa. For example, in Niger and Mali in the west of Africa we are seeing millions of hectares of land being reforested and that's providing increased crop productivity at the same time. That particular success story was based on a very simple change in government policy to give ownership of the trees to the land occupiers. Previously they were not allowed to own the trees and so they had no incentive to help regenerate them but that regeneration is now going on. It's caught on like wildfire! So there are very good success stories in Africa.

Is this problem man made or is it the outcome of natural phenomena or is it a combination of the two?

It's man made. This is not new in our history. Ever since agriculture began we've been degrading lands - the fertile crescent in the Middle East was degraded and people had to move. Now China and Russia are facing the same phenomenon of what is basically poor agricultural practices resulting in land degradation.

What would be your message to the governments of Africa who are still facing this problem?

To realise the tremendous investment potential there is in conserving and restoring their land, to bring in policies that can help farmers get started - because when they change to sustainable land management practices, for example, they need help, they need one-off payments to get them started because it can take a few years to see benefits in terms of the system. And of course farmers are not particularly interested in technology that doesn't give them returns within one growing system.

What sort of behaviors need to be changed?

Basically, to take better care of the land and not degrade it. If people don't own the land there's very little incentive for them to look after that land. So all the incentives that you can think of in terms of giving people some pride back in their land. It's a matter of building on what they are already doing. They are used to farming in harsh conditions so it is not a rapid technological fix that needs to come in, it's things that build on existing technology and improve them.

At the Rio plus 20 summit on sustainable development held in 2012, delegates agreed to strive for a world with neutral land degradation by 2030. Is that goal feasible?

At the political level it doesn't look like that is going to go through. We've got to start on the ground, in small clusters of activity, where we bring together all the actors. That means civil society organizations, farmers' cooperatives, local movements, private sector and international organizations. They all have to work together to move this and some exciting opportunities have been presented here in Namibia where you can see platforms where this sort of meeting of the minds is taking place.

Richard Thomas is with the United Nations University Institute for Water, Environment and Health (UNU-INWEH).

Growing veggies in the desert no longer a mirage

Desert-dwelling tribes have long survived on little more than dates and water. But now, the desert’s barren land can nourish much more than that - strawberries and tomatoes are also cropping up in some places. (20.08.2013)

Morocco is embracing a greener future by building the world’s largest solar power plant. And that's not all. A series of smaller initiatives are helping Moroccans adapt to climate change in a sustainable way. (20.08.2013)